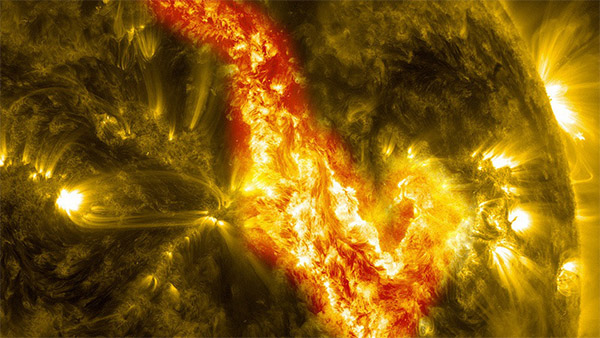 Read about it, and watch the video below:

A magnetic filament of solar material erupted on the sun in late September, breaking the quiet conditions in a spectacular fashion. The 200,000 mile long filament ripped through the sun’s atmosphere, the corona, leaving behind what looks like a canyon of fire. The glowing canyon traces the channel where magnetic fields held the filament aloft before the explosion. Visualizers at NASA’s Goddard Space Flight Center in Greenbelt, Md. combined two days of satellite data to create a short movie of this gigantic event on the sun.

In reality, the sun is not made of fire, but of something called plasma: particles so hot that their electrons have boiled off, creating a charged gas that is interwoven with magnetic fields.

These images were captured on Sept. 29-30, 2013, by NASA’s Solar Dynamics Observatory, or SDO, which constantly observes the sun in a variety of wavelengths.

Different wavelengths help capture different aspect of events in the corona. The red images shown in the movie help highlight plasma at temperatures of 90,000° F and are good for observing filaments as they form and erupt. The yellow images, showing temperatures at 1,000,000° F, are useful for observing material coursing along the sun’s magnetic field lines, seen in the movie as an arcade of loops across the area of the eruption. The browner images at the beginning of the movie show material at temperatures of 1,800,000° F, and it is here where the canyon of fire imagery is most obvious.

By comparing this with the other colors, one sees that the two swirling ribbons moving farther away from each other are, in fact, the footprints of the giant magnetic field loops, which are growing and expanding as the filament pulls them upward.

This video is public domain and can be downloaded at: http://svs.gsfc.nasa.gov/goto?11379