How much don’t we know? This week doctors announce that yes, really, there is a whole ligament in the human knee that we didn’t know about, and it’s not a small one tucked away but a mid-size one and “hidden” on the outside of the knee. They’ve named it the anterolateral ligament (ALL), and it does matter if it fails, people’s knees collapse suddenly. “Only” 97% of people have one. But how is this, it was first postulated by a surgeon in 1879, and took 134 years to find. For much of that time you might have been told there was a consensus on knee anatomy, and because thousands of doctors have done knee surgery and knee replacements are now de rigeur, you might have thought the science was settled.

Sorry about the graphic photo, but when I saw that headline, I thought this would be a tiny artifact. You need to see it to appreciate just how remarkable it is that this has been missed for so long. UPDATE: It’s so remarkable, I find Chrism comments below are useful #5, #8, #12, and quite possibly the ligament was known by another name, or associated with a different malady. Is it possible that doctors have missed it completely or more likely that the PR-team are exaggerating? I’ll go with “b”. Still the point about settled science remains the same. Now there is another point too — how our funding systems encourage sensational PR rather than careful analysis.  – Jo 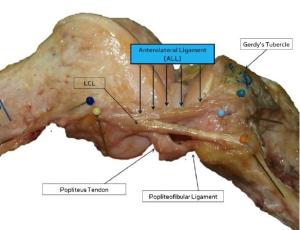 Blue label and arrows point to the newly discovered ALL ligament.

*This photo probably exaggerates the size of the ALL — there is another shot in the paper which makes it easier to understand how it might have been overlooked. Scroll through the comments (sorry it’s another gory shot).

Nov. 5, 2013 — Two knee surgeons at University Hospitals Leuven have discovered a previously unknown ligament in the human knee. This ligament appears to play an important role in patients with anterior cruciate ligament (ACL) tears.‪ Despite a successful ACL repair surgery and rehabilitation, some patients with ACL-repaired knees continue to experience so-called ‘pivot shift’, or episodes where the knee ‘gives way’ during activity. For the last four years, orthopedic surgeons Dr Steven Claes and Professor Dr Johan Bellemans have been conducting research into serious ACL injuries in an effort to find out why. Their starting point: an 1879 article by a French surgeon that postulated the existence of an additional ligament located on the anterior of the human knee.

That postulation turned out to be correct: the Belgian doctors are the first to identify the previously unknown ligament after a broad cadaver study using macroscopic dissection techniques. Their research shows that the ligament, which was given the name anterolateral ligament (ALL), is present in 97 per cent of all human knees. Subsequent research shows that pivot shift, the giving way of the knee in patients with an ACL tear, is caused by an injury in the ALL ligament.

Some of the conclusions were recently published in the Journal of Anatomy. The Anatomical Society praised the research as “very refreshing” and commended the researchers for reminding the medical world that, despite the emergence of advanced technology, our knowledge of the basic anatomy of the human body is not yet exhaustive.

‪The research questions current medical thinking about serious ACL injuries and could signal a breakthrough in the treatment of patients with serious ACL injuries. Dr Claes and Professor Bellemans are currently working on a surgical technique to correct ALL injuries. Those results will be ready in several years.

‪ACL tears are common among athletes in pivot-heavy sports such as soccer, basketball, skiing and football.

Just to elucidate exactly what was discovered here, I searched and after I posted this, the story has been picked up by mass media (like Skynews, and the BBC). Live Science has interviewed Dr Claes who adds more detail:

“The anatomy we describe is the first precise characterization with pictures and so on, and differs in crucial points from the rather vague descriptions from the past,” Claes told LiveScience. “The uniqueness about our work is not only the fact that we identified this enigmatic structure for once and for all, but we are also the first to identify its function.” The researchers presented their new work this March at the American Academy of Orthopaedic Surgeons meeting in Chicago.

The BBC says some doctors were “blown away” while others say it may not make much difference to treatment:

Dr Claes and Bellemans think an injury to the anterolateral ligament (ALL) may be partly responsible for this. They hypothesise some people may injure the ALL at same time as the ACL, leaving the knee less stable as the leg rotates.

And their biomechanical studies suggest tears in this ligament may also be to blame for small fractures that have previously been attributed to ACL injuries.

Mr Paul Trikha, a knee surgeon at the Surrey Orthopaedic Clinic, who was also not involved in the research said: “I do around 150 ACL repairs each year. When I saw Dr Claes’ research, it blew me away.

“Knowing about the ALL has given us a better understanding of what other structures may be damaged during this common injury and this will hopefully open up opportunities to improve surgery for our patients.”

But reaction to this work has been mixed.

Gordon Bannister, professor of orthopaedics at Bristol University said: “There is no doubt this is a very interesting paper from the anatomical point of view but at the moment this is not a major clinical breakthrough. “Its role in knee injuries is a perfectly reasonable hypothesis to test but the most important step is to see whether any intervention to the ligament actually makes a significant difference to patients.”

In 1879, the French surgeon Segond described the existence of a ‘pearly, resistant, fibrous band’ at the anterolateral aspect of the human knee, attached to the eponymous Segond fracture. To date, the enigma surrounding this anatomical structure is reflected in confusing names such as ‘(mid-third) lateral capsular ligament’, ‘capsulo-osseous layer of the iliotibial band’ or ‘anterolateral ligament’, and no clear anatomical description has yet been provided. In this study, the presence and characteristics of Segond’s ‘pearly band’, hereafter termed anterolateral ligament (ALL), was investigated in 41 unpaired, human cadaveric knees. The femoral and tibial attachment of the ALL, its course and its relationship with nearby anatomical structures were studied both qualitatively and quantitatively. In all but one of 41 cadaveric knees (97%), the ALL was found as a well-defined ligamentous structure, clearly distinguishable from the anterolateral joint capsule. The origin of the ALL was situated at the prominence of the lateral femoral epicondyle, slightly anterior to the origin of the lateral collateral ligament, although connecting fibers between the two structures were observed. The ALL showed an oblique course to the anterolateral aspect of the proximal tibia, with firm attachments to the lateral meniscus, thus enveloping the inferior lateral geniculate artery and vein. Its insertion on the anterolateral tibia was grossly located midway between Gerdy’s tubercle and the tip of the fibular head, definitely separate from the iliotibial band (ITB). The ALL was found to be a distinct ligamentous structure at the anterolateral aspect of the human knee with consistent origin and insertion site features. By providing a detailed anatomical characterization of the ALL, this study clarifies the long-standing enigma surrounding the existence of a ligamentous structure connecting the femur with the anterolateral tibia. Given its structure and anatomic location, the ALL is hypothesized to control internal tibial rotation and thus to affect the pivot shift phenomenon, although further studies are needed to investigate its biomechanical function.