It’s been 200 years since the last brand new sun-grazing comet from the Oort Cloud, according to Matthew Knight. This one is going within 0.0124 AU (which means slightly more than 2 solar radii).

—–UPDATE#3 (Post Perihelion): No one is quite sure what happened. The talk on twitter is that there’s no sign of a nucleus (not good),  but there is a dust stream, Ison is not like any other comet they’ve seen. @SungrazerComets tweets: “THIS > RT @RandomSpaceFact It is now clear that Comet #ISON either survived or did not survive, or… maybe both. Hope that clarifies things” Latest pic shows a faint streak leaving… 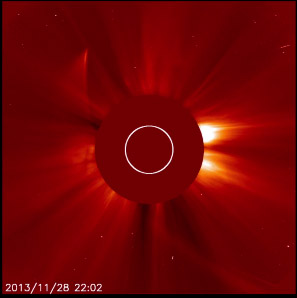 Comet Ison is swinging around the sun today. It’s so close to perihelion it has made it onto both the LASCO and the SOHO solar viewers — the instruments we watch the sun with. (LASCO, means Large Angle and Spectrometric Coronagraph. SOHO is the Solar and Heliospheric Observatory).

…this is one of the more extraordinary astronomical events to happen in modern history, and we get to sit in our comfy chairs and watch a giant ball of 4.5 billion year old ice hurtle through the Sun’s million-degree outer atmosphere at 0.1% of the speed of light, 93-million miles away from us. Regardless of sizzle, fizzle, or a victorious reemergence, comet ISON’s perihelion is a truly spectacular event!

Late yesterday a coronal mass ejection at the same time as the comet approaches: 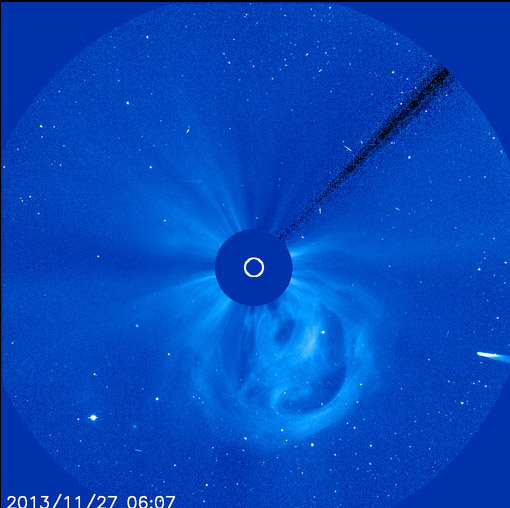 Earlier today the experts thought it might break up, but then it became much brighter so quickly they think, maybe, it’s a sun-grazer and will survive. The word is that it will hit negative magnitude soon (which means, it’s very very bright). Of course — you can’t see how bright because it’s next to the sun (don’t look, don’t look*).

Since entering the LASCO C3 field of view, comet ISON has increased by at least a factor of four, and indications are it may be closer to a factor of ten. In the most recently available images, the comet appears to be around magnitude +0.5.

It is now the opinion of the CIOC Team that Comet ISON is now behaving like a sungrazing comet. We can not comment on whether the nucleus is in tact or not, but our analyses indicate that its rate of brightening is directly in line with that we have experienced with other sungrazing comets. This has no implication on its chances of survival. — (Posted on the SOHO page quoting Comet ISON Observing Campaign.)

UPDATE #1: No. Wait! It’s fading. Predictions it will not survive

I’m reluctantly thinking it seems very unlikely to survive at this point. I do think it will reach perihelion, and reach the NASA SDO field of view, but based on what I see it doing right now, I will be very surprised to see something of any consequence come out the other side….more

If you go to the SOHO site you can see the updates: Wow, just wow, look at these images!
Latest: 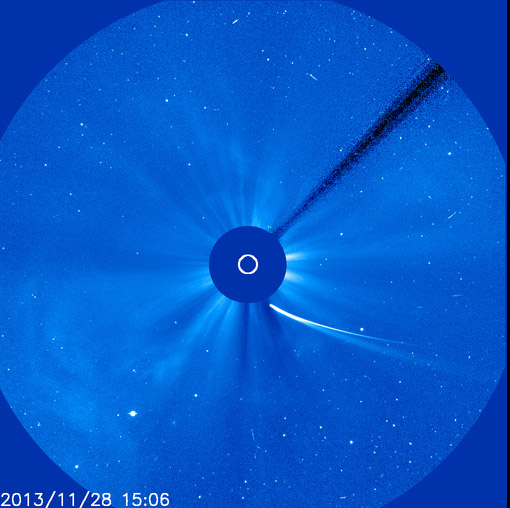 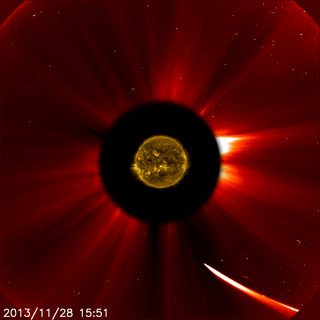 Comet ISON has moved quite close to the sun in this image from ESA/NASA’s Solar and Heliospheric Observatory captured at 10:50 a.m. EST on Nov. 28, 2013. This image is a composite, with the sun imaged by NASA’s Solar Dynamics Observatory in the center, and SOHO showing the solar atmosphere, the corona. ESA&NASA/SOHO/SDO

(Click on the image to go to the Goddard Multimedia page for more updates).

I found this CIOC page particularly  interesting. There are a collection of sun-grazing comets some of which even go  slightly closer than Ison, but Ison is different, it’s not from the usual Kreutz group (which do 500-1000 year cycles). Instead it appears to be new.

… there is no formal definition of “sungrazing.” However, a logical distinction (and one that I am advocating for in a paper I am currently writing) is comets that come close enough to the Sun to be subject to tidal disruption. What is tidal disruption? It’s when an object (comet, asteroid, moon, etc.) is close enough to a larger body that the gravitational tug on the near side of the object is so much stronger than the gravitational tug on the far side of the object that the object becomes elongated and eventually pulled apart. Astronomers call the distance at which this occurs the Roche limit. The exact distance depends on a comet’s density, but for typical comet densities is ~3.7 solar radii (0.017 AU).

How is this, back in 1680, The Great Comet was observed so well, that a reasonably reliable orbit could be calculated for it, and evidently that showed it was not a new comet but on a regular lap.

Ison is new. It was discovered last year:

Comet C/2012 S1 (ISON) was discovered on September 21, 2012 by astronomers Artyom Novichonok and Vitali Nevski, using a 16-inch telescope that is part of the International Scientific Optical Network (“ISON”), and after which the comet was named.

Could be some astronomers up late tonight … (or not). Sigh.

*I know you know that, but I have to say it.

1AU = The average distance from the Sun to Earth.