Are the”rellies” asking what they can buy you for Christmas? Have you got friends who are skeptic-leaning and might appreciate an easy-going, cartoon-loaded book? Problem solved : -) Order it here.

This is a book like no other. Carter and Spooner make a special combination. Readers here will know Bob Carter, who is a well known long-standing skeptical marine geologist, who has written Climate: the Counter Consensus (2010) and published countless papers. He’s formerly a Professor and Head of Earth Sciences at James Cook University (until JCU caved in to political correctness in a tale of remarkable petty spite).

People may not realize that John Spooner is a prize winning cartoonist for The-not-so-skeptical-Age daily newspaper in Melbourne. He has won too many prizes to list (see here) and is a brilliant political satirist with exceptional skill at the art of caricatures. It’s worth buying the book just to read the first chapter written by Spooner, once-upon-a-time-a-lawyer turned cartoonist. The best cartoonists have to be smart– if they aren’t a step ahead, it isn’t funny.

“Every cartoonist  and satirist in the world, not to mention the investigative reporters, should by now have had their bullshit detectors on high alert. If the evidence was so good and the sceptical scientists were so weak, wrong and so few in number, then why the need for such rancorous politics? If you have the UN, the EU, the banks, the financial markets, most of the clergy and the media on your side, then why this dishonorable nastiness as well? I’ve always hated bullies…”

“As anyone familiar with the judicial process knows, the gravest issues of liberty and fortune are often determined by a jury selected from the general public. … in the end it is the jury that decides which version of the scientific evidence is to be believes. No one in a civilized society is daunted by this process. We accept the outcome…”   —  John Spooner

The book is currently #12 in Amazons list of Natural Resources on kindle. See more cartoons and reviews below…

Thanks to John Spooner for permission to publish these. 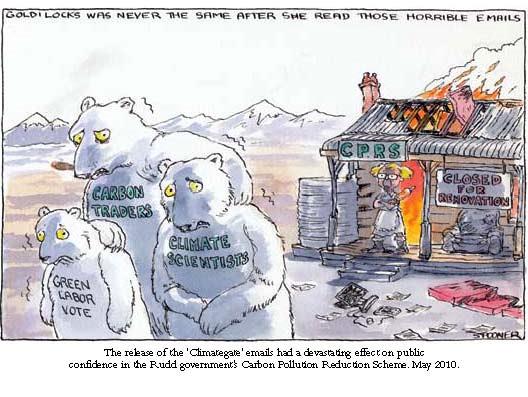 Make no mistake, this book is not just cartoons, but really about the science (in a friendly way) as well as politics. The book is even richer for the influence of Bill Kinninmonth, Martin Feil, Stewart Franks, and Bryan Leyland. For overseas readers, not that it’s definitely colored with an Australian flavor, though the rules are universal. (See Lubos’s review for a description of the contents and chapters and you’ll see what I mean).

“…it is deeply refreshing to read the new book called Taxing Air: Facts and Fallacies About Climate Change by the internationally respected geologist Bob Carter and illustrated by the cartoonist John Spooner, which puts climate change exactly where it should be – in perspective. After demolishing many other arguments for carbon taxes and climate alarm, Carter runs through recent weather events, showing that there is nothing exceptional, let alone unprecedented, about recent droughts, floods, heat waves, cyclones or changes to the Great Barrier Reef.
Carter is a courageous man, because within academia those who do not accept that climate change is dangerous are often bullied.
— Matt Ridley

“[The authors of Taxing Air] calmly, analytically and totally dismantle the global warming stupidity. They explain the basics of climate; they pose and answer the most basic questions – which are usually skated over or ignored by the so-called consensus – about global temperatures, their change or not, over time, and the various claims about them. … The extent of the relentless, sheer, never-ending industrial scale stupidity that Carter-Spooner clinically but devastatingly expose.”

“I’ve read a lot of books on climate change from both sides of the debate, and I think this one … is a standout. And I think it … should be in every school, every university, every community library, and especially in the offices of every federal and state MP in the country. It really does deserve to be widely read.”

— see all the reviews at TaxingAir