Meteorologists are already aware that changes in the interplanetary magnetic field (IMF) can affect the polar regions of Earth. Now, for the first time Lam et al report the magnetic field appears to influence atmospheric pressure in the mid latitudes. Lam compared the average surface pressure at times when the magnetic field is either very strong or very weak and found a statistically significant wave structure similar to an atmospheric Rossby wave. They claim to show that this works through a mechanism that is a conventional meteorological process, and that the effect is large enough to influence weather patterns in the mid-latitudes. The size of the effect is similar to “initial analysis uncertainties” in “ensemble numerical weather prediction” (which I take to mean “climate models”).

They are suggesting that small changes in this solar influence on the upper atmosphere could produce important changes through  “non-linear evolution of atmospheric dynamics”.

Jo suggests that IPCC-favoured climate models don’t include any solar magnetic effect at all, which is just one of many reasons why they don’t work.

The large scale wandering convolutions of the jet stream around the planet are Rossby waves (usually 4 – 6 in number). Some of these become very pronounced and detach into cells of warm or cool air.  Jet streams have been recorded traveling at nearly 400km per hour and the path of the jet stream is known to steer cyclonic storm systems in the air below.

The existence of a meteorological response in the polar regions to fluctuations in the interplanetary magnetic field (IMF) component By is well established. More controversially, there is evidence to suggest that this Sun–weather coupling occurs via the global atmospheric electric circuit. Consequently, it has been assumed that the effect is maximized at high latitudes and is negligible at low and mid-latitudes, because the perturbation by the IMF is concentrated in the polar regions. We demonstrate a previously unrecognized influence of the IMF By on mid-latitude surface pressure. The difference between the mean surface pressures during times of high positive and high negative IMF By possesses a statistically significant mid-latitude wave structure similar to atmospheric Rossby waves. Our results show that a
mechanism that is known to produce atmospheric responses to the IMF in the polar regions is also able to modulate pre-existing weather patterns at mid-latitudes. We suggest the mechanism for this from conventional meteorology. The amplitude of the effect is comparable to typical initial analysis   uncertainties in ensemble numerical weather prediction. Thus, a relatively localized small-amplitude solar influence on the upper atmosphere could have an important effect, via the nonlinear evolution of atmospheric dynamics, on critical atmospheric processes.

The field significance is strongest in the Southern Hemisphere, but also high (< 5%) for all regions except the equatorial.

Intriguingly there is discussion of a “global electric circuit” 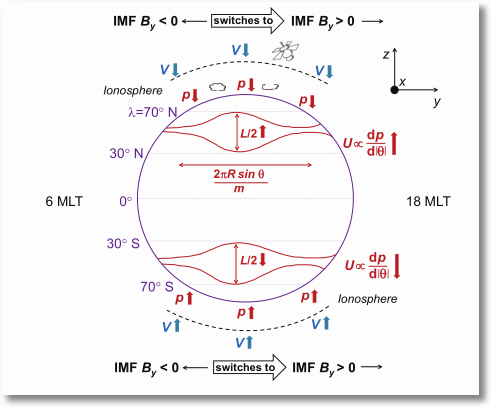 Figure 3. Our hypothesis is that the mid-latitude surface pressure is influenced by IMF By via a two-stage process. (i) As IMF By changes from dawnward to duskward, the electric potential difference between the ionosphere and the Earth’s surface, V, and the sea-level pressure p, decrease in the northern polar region; (ii) the mean zonal wind U at mid-latitudes increases resulting in an increase in the meridional wavelength (for simplicity labelled L in this figure; in text referred to as L ) of the stationary Rossby wave with an integer number of azimuthal waves m (at co-latitude θ and latitude  λ = 90°  – θ) The variations in V; p;U and L are reversed in the Southern Hemisphere.

Evidence for action via the global atmospheric electric circuit

The electric potential difference V between the ionosphere and the Earth’s surface can be decomposed into two components [6]:

The first term Va is driven by thunderstorms distributed around the globe that sustain a potential difference of 250 kV between the ground and ionosphere [14]. The second term Vi is driven by the solar wind which continually interacts with Earth’s magnetosphere via magnetic reconnection, driving the transport of plasma through the magnetosphere. This results in a dawn-to-dusk potential difference across the high-latitude polar cap ionosphere that depends on the IMF magnitude and direction [15]. The spatial variation of the solar-wind-driven ionospheric potential Vi is well understood [7, 8]. Figures S8(a)–(d) show its average configuration in corrected geomagnetic (CGM) coordinates for predominantly dawnward (By < 0) and predominantly duskward (By > 0) directed IMF for 5 < |B| < 10 nT. Taking the time-averaged difference of the vertical potential difference (3) between these two By configurations, we eliminate the potential Va due to the atmospheric thunderstorm-generated electric field which we assume to be independent of B to obtain:

Previously, proposals to link solar wind variations to significant weather or climate variability have been dismissed on the grounds that the magnitude of the energy change in the atmosphere associated with the solar wind variability is far too small to impact the Earth’s system. However, this argument neglects the importance of nonlinear atmospheric dynamics [20]. The amplitudes of the IMF-related changes in atmospheric pressure gradient are comparable with the initial uncertainties in the corresponding zonal wind used in ensemble numerical weather prediction (NWP) [21] of ~ 1 m s-1. Such uncertainties are known to be important to subsequent atmospheric evolution and forecasting [22]. Consequently, we have shown that a relatively localized and small-amplitude solar influence on the upper polar atmosphere could have an important effect, via the nonlinear evolution of atmospheric dynamics on critical processes such as European climate and the breakup of Arctic sea ice [23].

Next time modelers tell us that they can’t produce the modern warm period without a major effect from CO2, just smile and remind them that their models don’t include solar magnetic effects, nor any potential lunar forcing, so it’s not surprising that they can’t predict our climate.

h/t The Hockeyschtick, and to Tallbloke