Glaciers that tore trees in half and then froze the stumps are receding again in Alaska to reveal those old remnants of a warmer era. I like these little “concrete” anecdotes, though their true meaning depends on exactly how old these remains are, and whether that timing correlates with warming in other places.

Retreat of the Mendenhall Glacier reveals the remains of trees which grew more than 2,000 years ago

The Mendenhall Glacier’s recession is unveiling the remains of ancient forests that have remained frozen beneath the ice for up to 2,350 years. 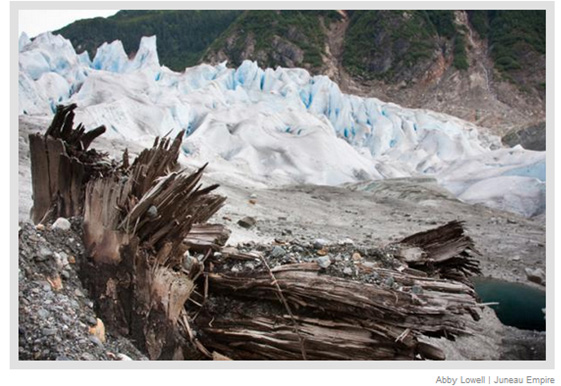 In Glacier Bay, Connor and other researchers have found evidence of ice advances occurring more than 5,000 years ago. They’ve also documented the glacial advance between 1724 and 1794 A.D. that pushed Huna Tlingit off their land, and written a paper incorporating those cultural and geographic histories. In that paper they cite Tlingit histories recorded by Richard and Nora Dauenhauer as saying that glacier was growing and advancing “faster than a running dog.”

Some of the ages of these trees suggest the Roman Warm Period may have occurred at the same time as an Alaskan Warm Period. Evidently, polar bears survived.)

These particular tree stumps are a bit too early to tie in with Medieval warm times in Europe.

Though, like other places, the glaciers started receding 200 years ago, long before man-made CO2 started to rise.