Effectively the power of CO2 to warm just got 30% less, according to a team of researchers, many of whom have in the past have published more alarming papers.  Remember “there is no debate” and “global warming is a fact” a lot “like gravity”. (And that gravitational constant g could be revised by a third soon, right?)

The Australian writes it up as “TEMPERATURE rises sparked by increased carbon dioxide levels will be lower than previously thought, an international research team has found”. The Age tells us that disaster is still coming but it will be slower. “Warming to take longer in reaching forecast levels”.

Otto et al looked at the global energy budget which means adding up atmospheric, ice, continent, and ocean energy. They compare it decade by decade since 1970, and argue that the long term equilibruim temperature response need to be revised down. The oceans are taking up more heat than anyone thought (or says Jo, given how little we know about the oceans, it could be that sneaky energy is tripping off to outer space?) 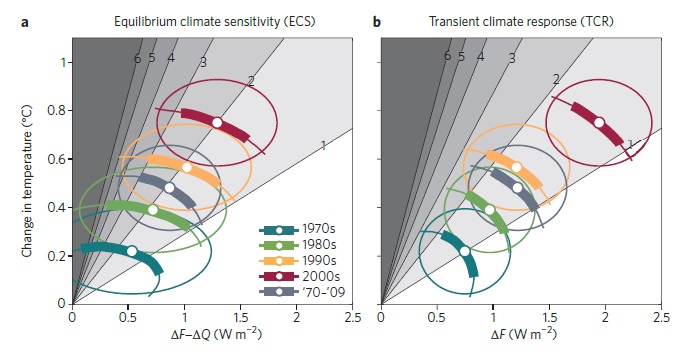 Observations of the global mean temperature change plotted against change in forcing minus heat uptake (ΔF–ΔQ) for the equilibrium climate sensitivity (ECS) (a) and against ΔF for the transient climate response (TCR) (b), for each of the four decades 1970s, 1980s, 1990s and 2000s and for the 40-year period 1970–2009. Ellipses represent likelihood contours enclosing 66% two-dimensional confidence regions; best-fit points of maximum likelihood are indicated by the circles; and the curved thick and thin lines represent the 17–83% and 5–95% confidence intervals of the resulting one-dimensional likelihood profile in ECS (or TCR), respectively. All time periods are referenced to 1860–1879, including a small correction in ΔQ to account for disequilibrium in this reference period14. Straight contours show iso-lines of ECS (a) and TCR (b), calculated using a best-fit value of F2x of 3.44 W m−2 (also adjusted for fast feedbacks)10. Uncertainty in F2x is assumed to be correlated with forcing uncertainty in long-lived greenhouse gases10. To avoid dependence on previous assumptions16, we report results as likelihood-based confidence intervals.

For the number-junkies, one number that has been used ad lib as gospel for years appears to have changed. The hallowed forcing due to a doubling of CO2 was 3.7Wm^-2 is being lowered to 3.44Wm-2.

F2x is the forcing due to doubling atmospheric CO2 concentrations.

The wide error bars on climate science knowledge (when it suits) mean that this 30% shift can be described as “in agreement”:

Using up-to-date data on radiative forcing, global mean surface temperature and total heat uptake in the Earth system, we find that the global energy budget6 implies a range of values for the equilibrium climate sensitivity that is in agreement with earlier estimates, within the limits of uncertainty.

Translated: we weren’t very sure of things, and we still aren’t, and our new estimates are lower, but we didn’t completely rule this out in the past, so therefore we were really right all along in a vague kind of way.

This gives the Age an excuse to tell us not to relax: “But the group’s modelling, using the most recent warming and ocean heat data, found the expected long-term temperature increase is consistent with earlier estimates.”

They don’t say that this means the tipping point (if there is one) is now further away, that there is less need to spend billions putting up windmills, that it changes the economic analysis for “action NOW!”. The cost benefit ratio of action to save our great great grandchildren from warmer winters just shifted.

It’s difficult working out climate sensitivity, no bones about it. My problem is with past statements that 97% of climate scientists were 90% sure what the climate would do a century from now, and the evidence was “overwhelming”.

Transient climate response is the immediate short term effect, and it’s got smaller:

I think the climate sensitivity figure is still too high but it’s good to see estimates being revised in the right direction.

Reality bites back. The deniers were ahead of the climate experts. We said the models were exaggerating and we were right.

Nic Lewis published earlier versions at both Bishop Hill and Watts Up: