UPDATED: Post note below, with a couple of extra caveats…

Lüdecke, Hempelmann, and Weiss found that the temperature variation can be explained with six superimposed natural cycles. With only six cycles they can closely recreate the 240 year central European thermometer record. There is little “non-cyclical” signal left, suggesting that CO2 might have a minor or insignificant effect.

The three German scientists used Fourier analysis to pick out the dominant cycles of one of the longest temperature records we have. The Central European temperature is an average of records from Prague, Vienna, Hohenpeissenberg, Kremsmünster, Paris, and Munich.

The dominant cycle appears to be about 250 years. There is also a cycle of about 60 years, corresponding to the Atlantic/Pacific decadal oscillations.

Data is of course, always the biggest problem. If we had 10,000 years of high quality global records, we could solve “the climate” within months. Instead, we have short records, and Lüdecke et al, make the most of what we have. The European records are only 240 years long, or (darn) one dominant cycle, and only one region, so to check that the results are valid over longer periods they also analyze a the 2000 year Spannagel Cave stalagmites proxy, where the dominant cycle of roughly 250 years is confirmed. To show that the results apply to other parts of the world, they look at the German Alfred Wegener Institut (AWI), Antarctica series.

Ominously, the temperatures of the dominant cycle (in Europe at least) peaked circa 2000 and if the six-driving-cycles do represent the climate then things are going to get cooler, quickly. Wait and see…

Fourier analysis can’t tell us what causes the cycles, but it can tell us the likely frequency, amplitude and phase of those cycles* (see the post note). If these are accurate, it can be used to rule out significant effects from man-made forces and ultimately to predict what will happen next.

In a recent paper [1] we Fourier-analyzed Central-European temperature records dating back to 1780. Contrary to expectations the Fourier spectra consist of spectral lines only, indicating that the climate is dominated by periodic processes (Fig. 1 left). Nonperiodic processes appear absent or at least weak. In order to test for nonperiodic processes, the 6 strongest Fourier components were used to reconstruct a temperature history. 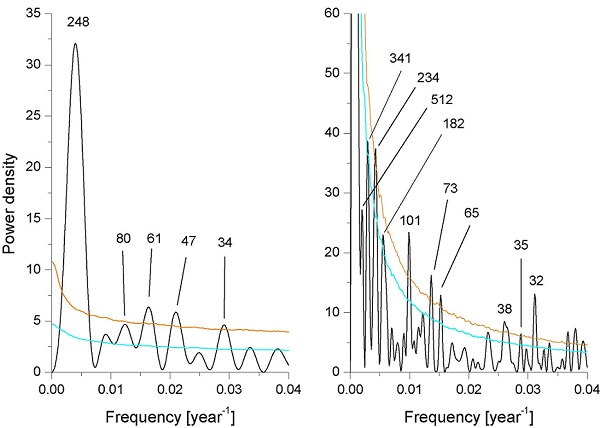 Fig. 1: Left panel: DFT of the average from 6 central European instrumental time series. Right panel: same for an interpolated time series of a stalagmite from the Austrian Alps.

Figure 2 shows the reconstruction together with the Central-European temperature record smoothed over 15 years (boxcar). The remarkable agreement suggests the absence of any warming due to CO2 (which would be nonperiodic) or other nonperiodic phenomena related to human population growth or industrial activity.

However one has to caution for artefacts. An obvious one is the limited length of the records. The dominant 250 year period peak in the spectrum results from only one period in the data. This is clearly insufficient to prove periodic dynamics. Therefore, longer temperature records have to be analyzed. We chose the temperature history derived from a stalagmite in the Austrian Spannagel cave, which extends back by 2000 years. The spectrum (Fig. 1 right) shows the 250 year peak in question. The wavelet analysis (Fig. 3) indicates that this periodicity is THE dominant one in the climate history. We ascertained also that a minimum of this 250 year cycle coincides with the 1880 minimum of the central European temperature record.

Thus the overall temperature development since 1780 is part of periodic temperature dynamics prevailing already for 2000 years. This applies in particular to the temperature rise since 1880, which is officially claimed as proof of global warming due to CO2, but clearly results from the 250 year cycle. The 250 year cycle was driving the temperature drop from 1800  to 1880 (see Fig. 4), which in all official statements is tacitly swept under the carpet. This same general fall and rise shows in the high quality Antarctic ice core record in comparison with the central-european temperature records (Fig. 4, blue curve).

As a note of caution we mention that a small influence of CO2 could have escaped this analysis. Such small influence could have been incorporated into the 250 year cycle by the Fourier transform, influencing slightly its frequency and phase. However since the period of substantial industrial CO2 emission is the one after 1950, the latter is only 20% of the central European temperature record length and can therefore only weakly influence the parameters of the 250 year cycle.

An interesting feature reveals itself on closer examination of the stalagmite spectrum (Fig.1 right). The lines with a frequency ratio of 0.5, 0.75, 1, 1.25 are prominent with respect to the 250 year periodicity. This is precisely the signature spectrum of a period-doubling route to chaos [2]. Indeed, the wavelet diagram (Fig. 3) indicates a first period-doubling from 125 to 250 years around 1200 AD. The conclusion is that the climate, presently dominated by the 250 year cycle, is close to the point at which it will become nonperiodic, i.e. “chaotic”. We have in the meantime more clearly ascertained the period-doubling and in more detail.

In summary, we trace back the temperature history of the last centuries to periodic (and thus “natural”) processes. This applies in particular to the temperature rise since 1880 which is officially claimed as proof of anthroprogenic global warming. The dominant period of 250 years is presently at its maximum, as is the 65 year period (the well-known Atlantic/Pacific decadal oscillations).

Cooling as indicated in Fig. 2 can therefore be predicted for the near future, in complete agreement with the lack of temperature increase over the last 15 years. The future temperatures can be predicted to continue to decrease, based on the Fourier components. Finally we note that our analysis is compatible with the analysis of Harde who reports a CO2 climate sensitivity of 0.4 K per CO2 doubling by model calculations [3].

Finally we note that our analysis is seamlessly compatible with the analysis of P. Frank in which the Atlantic/Pacific decadal oscillations are eliminated from the world temperature and the increase of the remaining slope after 1950 is ascribed to anthropogenic warming, resulting in a 0.4 deg temperature increase per CO2 doubling. The slope increase after 1950, turns out in our analysis as simply the shape of the 250 year sine wave. A comparable small climate sensitivity is also found by the model calculations [3] .

POST NOTE: April 3, 2014   Don’t read too much into the cycle lengths or the predictions. Thanks to Filius for reminding me to look at the use of the DFT here. I found out a couple of months after posting this that the DFT assumes all the cycles fit perfectly into the chosen end points (a gobsmacking assumption really), so readers should be aware that the cycle lengths are entirely speculative. If we used different end points, the six cycles would still be there, but they’d be different lengths. There are good reasons I have not cited this paper as demonstrating anything in particular, except that natural cycles could possibly explain the current patterns. I still think it is a paper worth discussing. I was not aware of the depth of the European historical data. I do believe we’ll find some natural cycles that are meaningful that we are currently unaware of. The search needs to start somewhere.

Correction: I had written “Vostok” in the introduction. That was wrong, it’s German Alfred Wegener Institut (AWI).