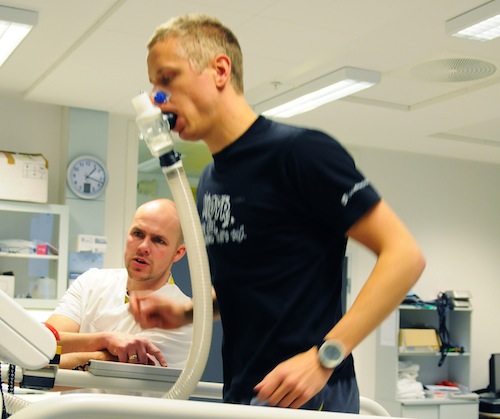 Sorry to do this, but now there are no excuses (apart from arthritis, amputation and angina).

Don’t read on if you are a conscientious objector to exercise. The “I don’t have time” excuse doesn’t wash anymore. Though, if you are habitually running to catch the bus, you can now call that an exercise program (when your doc asks, you can say you do the 1-AIT training regime from NTNU –– Trondheim).

If you are sedentary, new research from Norway suggests that if you do just four minutes of high-intensity training three times a week, within 10 weeks your peak ability to take up oxygen will have improved by 10%.

Do you care about VO2max? It’s a measure of aerobic fitness and it’s linked to that factor that trumps all others: “all cause mortality” (ACM). To put this study into perspective, a 10% improvement is only 10%. The fittest people have 100% higher VO2 max that the least fit (eg from about 20mL/kg/min to 40mL/kg/min). But even a 10% improvement in VO2 max can make a difference to your mortality.

A review of results from 102,000 people showed that if people are split into groups of “fitness” the least fit were 70% more likely to die than the most fit (Kodama et al 2009). Dr Mike Nichols summarizes the importance of that result:

How many drugs show comparable results?

For those who stay away from all health-science (and I can understand why), you may have missed that the “consensus” on fitness is currently shifting. Instead of long hours of low impact exercise, there are convincing arguments, and plenty of evidence, to suggest that peak performance is more important.

This study rather takes that to an extreme. They had shown that doing a 4 x 4 program helped (where people do 4 minutes on, 3 minutes off for four rounds, and do it three times a week). In the latest round they compared it to just doing 4 minutes on, 2 days off, and discovered you could get 75% of the benefits in a quarter of the time. (Though I don’t know if there is a catch like a 30-minute-warm-up. There is no mention of that in the press release.)

Fit in twelve minutes a week

(29.05.2013) It is a commonly held perception that getting in shape and staying there requires hard work and hours upon hours of training. New research shows the opposite – it seems that only four minutes of vigorous activity three times per week is enough to be fit and healthy.

Regular training improves maximal oxygen uptake (VO2max), which is a well-established measure of physical fitness. However, just how much exercise, and how intense that exercise should be to deliver the biggest benefit remains to be defined. Now, researchers from the KG Jebsen – Centre of Exercise in Medicine at the Norwegian University of Science and Technology (NTNU) in Trondheim have found that just three short high-intensity sessions (AIT) per week can make for substantial differences in the fitness of inactive men. Their results have just been published in PLOS ONE.

“Our data suggest that a single bout of AIT performed three times per week may be a time-efficient strategy to improve VO2max”, says Arnt Erik Tjønna, a postdoctoral fellow at the center and lead author of the study. Tjønna says one of the advantages of this approach is that it is easy for people to incorporate into their daily lives.

The researchers measured changes in VO2max and traditional cardiovascular risk factors in 24 inactive but otherwise healthy overweight men after they completed a 10-week training session that involved three weekly high-intensity interval sessions. One group of 13 followed a protocol that has previously shown to be effective, consisting of four intervals of 4 minutes of high intensity exercise at 90% of maximal heart rate (HRmax) interspersed with 3 minutes of active recovery at 70% HRmax (4-AIT), commonly known as 4×4 training.

The other group followed a protocol that consisted of one 4-minute interval at 90% HRmax (1-AIT).

After training, VO2max increased by 10% in the group that had just one high-intensity session three times a week (1-AIT), while the group that followed the 4×4 regime increased its VO2max by 13%. Both groups saw decreases in their blood pressure, but the 1-AIT the group’s blood pressures showed greater decreases than their 4-AIT counterparts for both systolic and diastolic readings.

Tjønna says while the results look promising, the number of study participants was small, which limits the scientists’ ability to extrapolate their findings. He also noted that people who are active probably won’t benefit as much as the inactive participants did from the 1-AIT training regime.

“It has to be noted that the subjects were previously inactive, and the same effect on physical fitness cannot be expected in active individuals,” he said. “Nevertheless, since we know that more and more people are inactive and overweight, the kind of improvement in physical fitness that we saw in this study may provide a real boost for inactive people who are struggling to find the motivation to exercise.”

For what it’s worth, I started interval training nearly a year ago, trying the 8:12 Uni NSW program, and was (for a change) very impressed with the results. I now consider it essential.

I disagree with the NTNU press release that 12 minutes a week makes you “fit and healthy”. Sedentary people need more than a 10% improvement to qualify for that category, but since something like half the population is sedentary, then 12 minutes a week could save more lives than nearly any other cheap, short intervention or drug anyone can name.