And you thought advertising or certificates couldn’t get more stupid.
Thanks to Christopher Essex for spotting this gem:  http://www.dominosugar.com/carbonfree/ 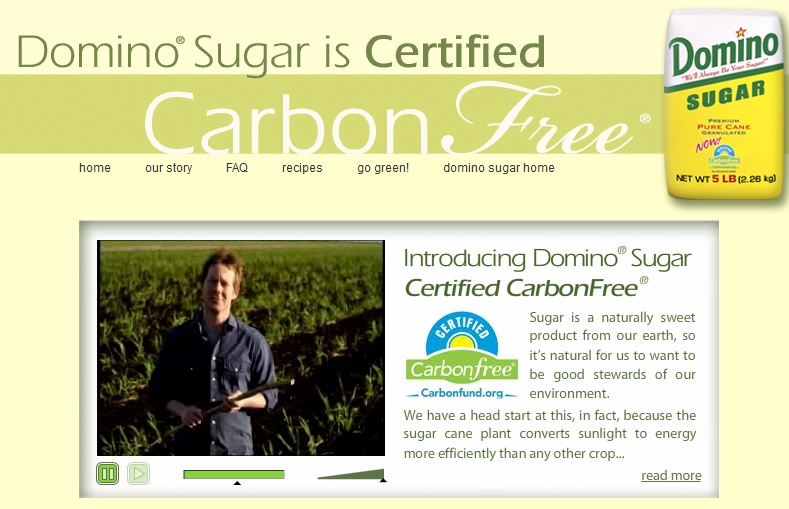 You’ll have to click to go to the Domino site to see the helpful man tell you that “This is Big”.

They probably paid a lot for that ad.

Some of the poor users are not sure what it means. That’s OK, Domino helpfully provides an FAQ page:

Is it the same sugar? Will it function the same way in my recipes?

Look out. You might think that carbon free sugar would be the ultimate diet-sugar. But it’s not so. Carbon free is not low-calorie. Lucky it is still useable at high temperatures “just like” normal sugar, eh?
Just so everyone can appreciate this special-chemistry-moment: in the sugar molecule below, the grey circles with a “C” are the carbon ones.

…
Remember the low-carbon crowd that this product appeals to are the ones who think they have science on their side.

To get certification this meaningless takes time:
“In order to earn CarbonFund.org’s CarbonFree® certification, Domino® Sugar products were put through a comprehensive, six-month certification process.”

Here’s another sort of carbon-free sugar. It’s “Organic” too.

Christopher Essex  has been entertaining people with it for ages and points out that when your chemistry is this loose anything is possible.

If you can have oxygen free carbon dioxide it is only a small step to having carbon free sugar.  You could replace the carbon by, say, silicon from  which one might get some kind of abrasive or just take all the carbon away and get water. So next time you drink pure water think of carbon free sugar.

Colleague Juan replies: “Perfect! if you can remove oxygen from carbon dioxide, and  carbon from sugar, why not carbon from coal too?…”
The propaganda takes over people’s understanding of science, the advertising gradually erases what they were taught at school, and the population gets that much more confused. The brand-name of science becomes just that much less useful.
Robert Tracinski summed it up:

The environmentalist movement is attempting a … con. They are stealing the terminology of science to provide cover for an irrational, unscientific fear of industry and technology. And so while they loudly claim to be the tribunes of science, they actually play to and rely on the public’s ignorance of science.

“Get that carbon out of my food!”

Stephen Harper posted a study on this site in 2011, which showed (rather savagely) how effective the propaganda machine has been in undoing all those years of chemistry at school.  He randomly asked 100 people in the street and the results show the sugar “carbon free” advertising might work.