Voting closes on Tuesday. Look for “Jo Nova“. Click “next” until you get the chance to click Finish, or Submit. Thanks! Overseas votes welcome.

This week in stem cell news one research group announced they’d accidentally figured out a way to easily convert human bone-marrow stem cells into brain cells which could in future repair spinal or brain damage.  Another group showed that if you happen to be a particular type of old mouse with memory problems, researchers can give you a transplant of stem cells that restore your learning and memoryand help you swim through water mazes faster. But seriously, these discoveries could help a lot of very needy people.

Ladies and Gentlemen — there is a revolution going on, and it’s not the Green one. How much could $2 billion wasted dollars have achieved if it were spent wisely?

These two studies fit together quite well — the first shows it’s possible to use stem cells to restore brain function, the second suggests it might be easier to get the right stem cells than anyone thought. 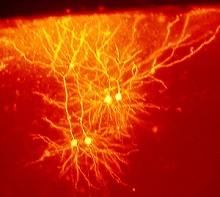 How’s this for odd, wierd, exciting and worrying at the same time, human embryonic stem cells were implanted into a strain of mouse that does not reject transplants from other species. The cells were cultured with chemicals that helps them develop into nerve cells, and they apparently went on to become functional and useful.

[University of Wisconsin-Madison] “After the transplant, the mice scored significantly better on common tests of learning and memory in mice. For example, they were more adept in the water maze test, which challenged them to remember the location of a hidden platform in a pool.

The study began with deliberate damage to a part of the brain that is involved in learning and memory.

Three measures were critical to success, says Zhang: location, timing and purity. “Developing brain cells get their signals from the tissue that they reside in, and the location in the brain we chose directed these cells to form both GABA and cholinergic neurons.”

These cells were placed at the hippocampus, and grew out to connect with the damaged part of the mouse brains (the medial septum). They specialized and connected the right cells together.

This is Big Medicine, and there are big risks. Often, stem cells grow into tumors. This time, the research team say they got it right by coaching the stem cells to differentiate before they were injected.

[Science Daily] “Ensuring that nearly all of the transplanted cells became neural cells was critical, Zhang says. “That means you are able to predict what the progeny will be, and for any future use in therapy, you reduce the chance of injecting stem cells that could form tumors. In many other transplant experiments, injecting early progenitor cells resulted in masses of cells — tumors. This didn’t happen in our case because the transplanted cells are pure and committed to a particular fate so that they do not generate anything else. We need to be sure we do not inject the seeds of cancer.”

Brain repair through cell replacement is a Holy Grail of stem cell transplant, and the two cell types are both critical to brain function, Zhang says. “Cholinergic neurons are involved in Alzheimer’s and Down syndrome, but GABA neurons are involved in many additional disorders, including schizophrenia, epilepsy, depression and addiction.”

Though tantalizing, stem-cell therapy is unlikely to be the immediate benefit. Zhang notes that “for many psychiatric disorders, you don’t know which part of the brain has gone wrong.” The new study, he says, is more likely to see immediate application in creating models for drug screening and discovery.

Ultimately, who wouldn’t prefer to stay outside the ethical quagmire, avoid embryonic stem cells, and generate your own perfect “transplants”, as needed? Our bodies won’t reject our own cells, but it is expensive and difficult to generate a personal cell-line for every patient — this discovery may change that. A group, directed by Richard Lerner at Scripps, discovered that an antibody can be injected into bone marrow cells and transform the cells into brain cells. They thought the antibody they were injecting would stimulate the growth of the stem cells, but did not expect it would set off sweeping changes and induce the formation of neural cells.  A serendipitous discovery.

[Scripps News] Current techniques for turning patients’ marrow cells into cells of some other desired type are relatively cumbersome, risky and effectively confined to the lab dish. The new finding points to the possibility of simpler and safer techniques. Cell therapies derived from patients’ own cells are widely expected to be useful in treating spinal cord injuries, strokes and other conditions throughout the body, with little or no risk of immune rejection.

“These results highlight the potential of antibodies as versatile manipulators of cellular functions,” said Richard A. Lerner, the Lita Annenberg Hazen Professor of Immunochemistry and institute professor in the Department of Cell and Molecular Biology at TSRI, and principal investigator for the new study. “This is a far cry from the way antibodies used to be thought of—as molecules that were selected simply for binding and not function.”

Lerner says. “With this method, you can go to a person’s own stem cells and turn them into brain cells that can repair nerve injuries.

This group plans to work with another team who are trying to regenerate nerves in the eye.

What was especially ground-breaking about this was that a single type of molecule tranformed the cells instead of a long, risky, series of steps:

[Scripps News]  Changing cells of marrow lineage into cells of neural lineage—a direct identity switch termed “transdifferentiation”—just by activating a single receptor is a noteworthy achievement. Scientists do have methods for turning marrow stem cells into other adult cell types, but these methods typically require a radical and risky deprogramming of marrow cells to an embryonic-like stem-cell state, followed by a complex series of molecular nudges toward a given adult cell fate. Relatively few laboratories have reported direct transdifferentiation techniques.

“As far as I know, no one has ever achieved transdifferentiation by using a single protein—a protein that potentially could be used as a therapeutic,” said Lerner.

Current cell-therapy methods typically assume that a patient’s cells will be harvested, then reprogrammed and multiplied in a lab dish before being re-introduced into the patient. In principle, according to Lerner, an antibody such as the one they have discovered could be injected directly into the bloodstream of a sick patient. From the bloodstream it would find its way to the marrow, and, for example, convert some marrow stem cells into neural progenitor cells. “Those neural progenitors would infiltrate the brain, find areas of damage and help repair them,” he said.

Lerner is well known for his work with antibodies, and was president of The Scripps Research Institute for 25 years.

[Scripps News]  In the late 1980s, Lerner and his TSRI colleagues helped invent the first techniques for generating large “libraries” of distinct antibodies and swiftly determining which of these could bind to a desired target. The anti-inflammatory antibody Humira®, now one of the world’s top-selling drugs, was discovered with the benefit of this technology.