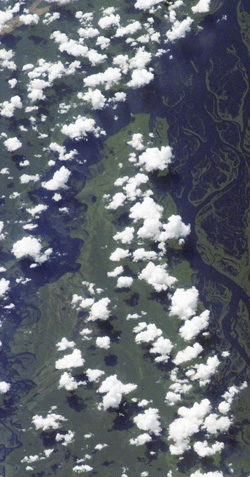 What if winds were mainly driven by changes in water vapor, and those changes occurred commonly in air over forests? Forests would be the pumps that draw in moist air from over the oceans. Rather than assuming that forests grow where the rain falls, it would be more a case of rain falling where forests grow. When water vapor condenses it reduces the air pressure, which pulls in more dense air from over the ocean.

A new paper is causing a major stir. The paper is so controversial that many reviewers and editors said it should not be published.  After two years of deliberations,  Atmospheric Chemistry and Physics decided it was too important not to discuss.

The physics is apparently quite convincing, the question is not whether it happens, but how strong the effect is. Climate models assume it is a small or non-existent factor. Graham Lloyd has done a good job describing both the paper and the reaction to it in The Australian.

Sheil says the key finding is that atmospheric pressure changes from moisture condensation are orders of magnitude greater than previously recognised. The paper concludes “condensation and evaporation merit attention as major, if previously overlooked, factors in driving atmospheric dynamics”.

“Climate scientists generally believe that they already understand the main principles determining how the world’s climate works,” says Sheil. “However, if our hypothesis is true then the way winds are driven and the way rain falls has been misunderstood. What our theory suggests is that forests are the heart of the earth, driving atmospheric pressure, pumping wind and moving rain.”

Judith Curry has been following this idea for some time.

Judith Curry of the Georgia Institute of Technology, an author of the standard textbook Thermodynamics of Atmospheres and Oceans, is encouraging. “The process they describe is physically correct,” she said. “The main question is its relative magnitude compared with other processes.” She thinks it could explain why climate models do not get monsoons and hurricanes right.

If this is a strong driver, it means Australia is not covered in arid land because rainfall is low. If the trees were planted the rain would fall:

“I would have said Australia is a desert because of the global climate cycles, but if you do the calculations, a forest across the surface of Australia would produce forces strong enough to water it and you wouldn’t need to irrigate.”
Sheil said.

Even New Scientist admits this paper could be a big one.

The implications are huge. “In standard theories, if we lose forests the rainfall in the continental interiors generally declines by 10 to 30 per cent. In our theory, it is likely to decline by 90 per cent or more,” says Sheil.

True Greens will surely be torn

If the paper is right, it’s a reason to plant many more trees, but it diminishes the role of CO2, shows the climate models are pathetically inadequate and is another reason why a carbon market, giant windfarms, and solar panels are a waste of time and money.

On Judith Curry’s site the authors are answering questions

The authors describe getting it published as a two year epic.

It’s been an epic process – most papers get published (or rejected) in less than a tenth of that time. The paper is accompanied by an unusual Editor Comment (p. 1054) stating that in the paper we have presented a view on atmospheric dynamics that is both “completely new” and “highly controversial”. They accept that we have made a case to be answered: they clarify that “the handling editor (and the executive committee) are not convinced that the new view presented in the controversial paper is wrong.” That’s not exactly an endorsement but it is progress.

We have described a new and significant source of potential energy governing atmospheric motion. Previously, the only such recognised energy source was the buoyancy associated with temperature gradients. Unlike the buoyancy mechanism, that applies to both liquids and gases, our new mechanism applies only to gases. Water vapor condenses and disappears from the gas phase when moist air ascends and cools. For this reason the water vapor pressure declines with height much faster than the other (non-condensable) atmospheric gases… (See Curry’s site for the equations and more theoretical background).

The authors explain why this is a big leap forward for models, and why models are not based on physical laws but are merely fitted to past data.

The physical laws behind all existing atmospheric circulation models are Newton’s second law, conservation of mass, the ideal gas law and the first law of thermodynamics. Here the first law of thermodynamics is assigned the role of the energy conservation equation (see, e.g., McGuffie and Henderson-Sellers 2001, p. 1084). However, while equilibrium thermodynamics allow the estimation of the maximum possible mechanical work from heat it provides neither information about the actual efficiency of converting heat to work (kinetic energy) nor whether such conversion to motion actually occurs. In practice, this means that models do not define these factors from physical principles but through adjusting model parameters in order to force it to fit observations (i.e., to produce the observed wind speeds). Mostly this pertains to the determination of the turbulent diffusion parameters. An
interested reader see p. 1776 of Bryan and Rotunno (2009) for a simple example (see also here for a discussion). The principle remains the same even in the most complex models.

Thus, while there are physical laws in existing models, their outputs (including apparent circulation power) reflect an empirical process of calibration and fitting. In this sense models are not based on physical laws. This is the reason why no theoretical estimate of the power of the global atmospheric circulation system has been available until now.

Phase transitions of atmospheric water play a ubiquitous role in the Earth’s climate system, but their direct
impact on atmospheric dynamics has escaped wide attention. Here we examine and advance a theory as to how condensation influences atmospheric pressure through the mass removal of water from the gas phase with a simultaneous account of the latent heat release. Building from fundamental physical principles we show that condensation is associated with a decline in air pressure in the lower atmosphere. This decline occurs up to a certain height, which ranges from 3 to 4 km for surface temperatures from 10 to 30 C. We then estimate the horizontal pressure differences associated with water vapor condensation and find that these are comparable in magnitude with the pressure differences driving observed circulation patterns. The water vapor delivered to the atmosphere
via evaporation represents a store of potential energy available to accelerate air and thus drive winds. Our estimates
suggest that the global mean power at which this potential energy is released by condensation is around one per cent of the global solar power – this is similar to the known stationary dissipative power of general atmospheric circulation. We conclude that condensation and evaporation merit attention as major, if previously overlooked, factors in driving atmospheric dynamics.