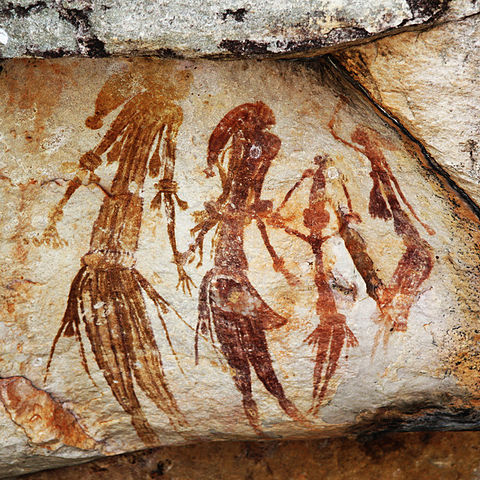 Two million years of climate change has made us human — in a ying meets yang contradiction, while climate change destroyed cultures and groups,  without it, we would not be who we are. The brutal forces of Nature tested our ancestors with droughts, storms, floods and tidal surges, but if the climate had stayed the same, would we have had Bach, Leonardo, and Newton?

At the end of the day, we have a civilization that allows millions of people to pursue happiness without fear that they will die of dysentery, be murdered by marauding barbarians, or lose their children to slave traders.

We are the lucky bastards at the end of a long line of poor sods who struggled and suffered to stay one step ahead of the reaper.

Here are two stories of studies that suggest dramatic effects of climate change on long lost peoples. The second, below, may finally explain the disappearance of the mysterious well developed aboriginal artform known as the “Bradshaw” style.

Some swings occurred so fast they happened in “hundreds of years” – as little as 10 generations in the Olduvai Gorge area.

A series of rapid environmental changes in East Africa roughly 2 million years ago may be responsible for driving human evolution, according to researchers at Penn State and Rutgers University.

“The landscape early humans were inhabiting transitioned rapidly back and forth between a closed woodland and an open grassland about five to six times during a period of 200,000 years,” said Clayton Magill, graduate student in geosciences at Penn State. “These changes happened very abruptly, with each transition occurring over hundreds to just a few thousand years.”

It wasn’t a slow progression of climate, or one big change, it was rapid swings back and forward:

According to Katherine Freeman, professor of geosciences, Penn State, … “There is a view this time in Africa was the ‘Great Drying,’ when the environment slowly dried out over 3 million years,” she said. “But our data show that it was not a grand progression towards dry; the environment was highly variable.”

According to Magill, many anthropologists believe that variability of experience can trigger cognitive development.

The changes happened at the same time we started using tools:

“We show that the environment changed dramatically over a short time, and this variability coincides with an important period in our human evolution when the genus Homo was first established and when there was first evidence of tool use.”

“The orbit of the Earth around the sun slowly changes with time,” said Freeman. “These changes were tied to the local climate at Olduvai Gorge through changes in the monsoon system in Africa. Slight changes in the amount of sunshine changed the intensity of atmospheric circulation and the supply of water. The rain patterns that drive the plant patterns follow this monsoon circulation. We found a correlation between changes in the environment and planetary movement

Stop Climate Sameness! If the climate had been steady and unchanging, we would not be what we are.

A beautiful mysterious form of aboriginal art (see the images on this page) disappeared 7,000 years ago from the remote Kimberley region of far north Western Australia. The art that replaced it 3,000 years later was very different and not as complex, and the reason the original artists stopped making the Bradshaw style of painting has long been a mystery.

A new study finally might answer that question. A monster ENSO induced drought from 7,000 to 5,500 years ago may have wiped out the first indigenous people in the Kimberley. The Australian summer monsoon collapsed. The 1,500 year drought coincides with the disappearance of the distinct art. 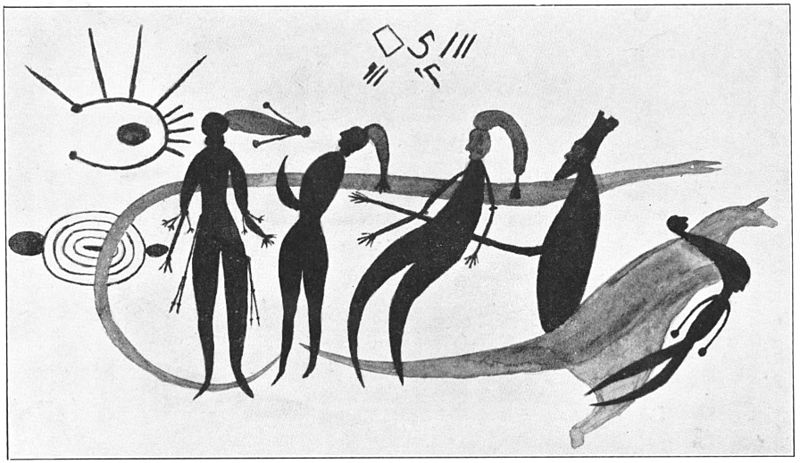 Researchers investigating rapid climate change in the Kimberley region found the intense drought coincided with the disappearance of a pre-Aboriginal style of rock paintings about 7000 years ago. [Source: News.com] 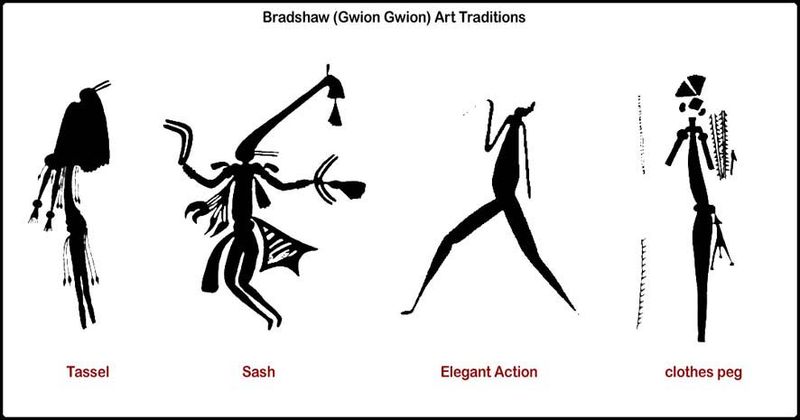 One branch of aboriginal art, called Bradshaw or Gwion art, was paradoxically highly developed, stylized and distinctive, and more complex than other forms, yet it’s also some of the oldest art. About 7,000 years ago it vanished, and was replaced (after a 3,000 year gap) with the simpler style called Wandjina.

Joeseph Bradshaw was a pastoralist in the late 1800’s who discovered the art, and described it as being aesethically similar to ancient Egyptian art. Bradshaw’s expertise was questioned, other experts (who apparently hadn’t seen the art first hand) figured he had put his own Eurocentric view on it, and the art was ignored for decades. An amateur archaeologist Grahame Walsh documented many of the Bradshaw artworks in the 80’s and 90’s.

In another quirky curiosity, many of the old images keep their vivid colours apparently “because they have been colonized by bacteria and fungi, such as the black fungus, Chaetothyriales. The pigments originally applied may have initiated an ongoing, symbiotic relationship between black fungi and red bacteria.” [Wiki]

The timing could be coincidence

Correlation is not causation. Professor Peter Veth, chair in Kimberley rock art at the University of Western Australia disagrees that the drought caused the death of this pre-historic people:

“…Peter critiques the research paper for its argument about how the simultaneous changes in climate patterns and art styles reveal the collapse of a culture. “The cultural explanations they’ve put forward, about it being the demise of one culture and the beginning of another, are fundamentally flawed,” he told Australian Geographic.

Peter explains that archaeology from occupation sites throughout the Kimberley suggests Aboriginal habitation from about 45,000 years ago until the present.

“They’ve got a coincidence – a gap in the pollen record that fits into what is thought to be the change from Gwions to the very obviously different Wandjina art form,” Peter says. “But to suggest that you’ve had the death of a pre-aboriginal culture and then the migration of a new people is totally unsupported by the linguistics, the genetics and the archaeology.”

“A change in art style does not equate with a new people or a crash – graphic switches occur in the art of Aboriginal Australia in many places,” he says.”

The Climate Deniers are those who pretend the climate has always been the same.