In a competitive field it’s going to hard to beat this.

In 2007 the Victorian Government thought it was a good idea to spend $24 billion to build a humungously big desalination plant. There was a drought on at the time, and a specialist in small dead mammals said the drought would never end.  But now Victorian households will pay up to $310 extra in water bills next year, and something like that every year for the next 28 years until it’s paid off.

Even the people running the plant say it’s too big,

Herald Sun EXCLUSIVE: THE French boss of the troubled Wonthaggi desalination plant has admitted for the first time that the plant is too big for Melbourne’s water needs.

Suez Environment chief executive Jean-Louis Chaussade told the Herald Sun the size of the plant was based on unrealistic rainfall expectations.

“The design was done to provide water to the full city of Melbourne in case of no rain during one year – which was not realistic … The details why it was 150GL per year, I don’t know,” he said.

Which bright spark believed the government paid advertising that said there will be endless droughts? Who came up with the 28-billion-dollar-idea that Melbourne, (Melbourne?!) would run out of rain for a year?

With only 150 years of rainfall data to go from, who could have possibly have predicted that it would keep raining? 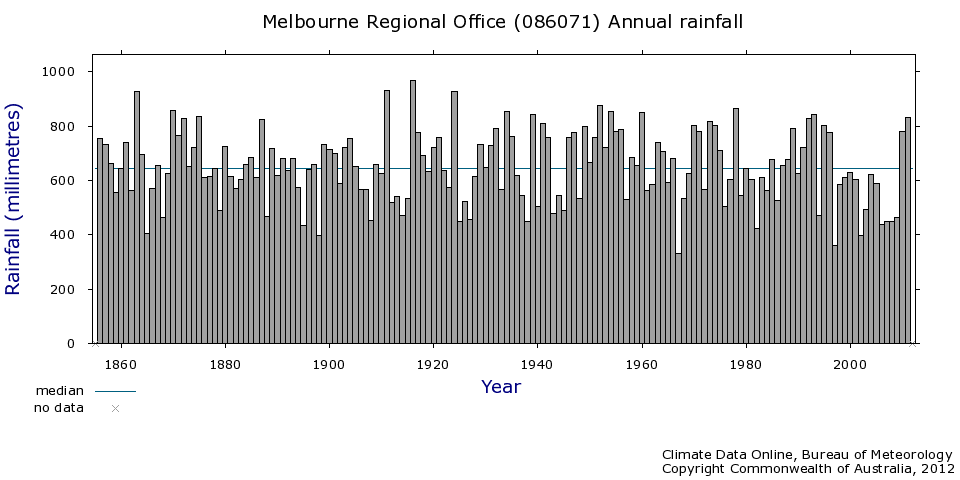 The Wonthaggi Desal project impressed me with the sheer statewide scope of payments and precocious length of encumberment. Children not yet conceived will be paying one day too. The entire productive output scored highly for “Useless” and we already know its Flagrant before it’s even finished. There are few accidental offsetting benefits.

These are the nicest things people can say about it:

Do droughts cost less than Desal?

According to Environment Victoria: “The 2002-3 drought was estimated to cost the economy around $6.6 billion.”

Perhaps we could have built a dam?

The other alternative  is to wait for the drought and buy up some water. When you have $24 billion to spend we might be able to fly in crates of Mt Franklin Spring Water from Hobart.

I know there will be other contenders for the 2012 Most Useless Flagrant Flop Of Government (MUFFOG). There are probably also contenders for Brand New Meaningless Award Acronym. Do send ’em.

PS: “Mr Chaussade’s company is suing the State Government for $1 billion to reclaim losses from the job.”

*Jokes aside. Droughts cost more than money. Which is why we need climate models that predict them.