UPDATE: See the video below

So Monckton snuck onto a microphone and dared break the sacred tabernacle of climate. There are some things you just can’t say… 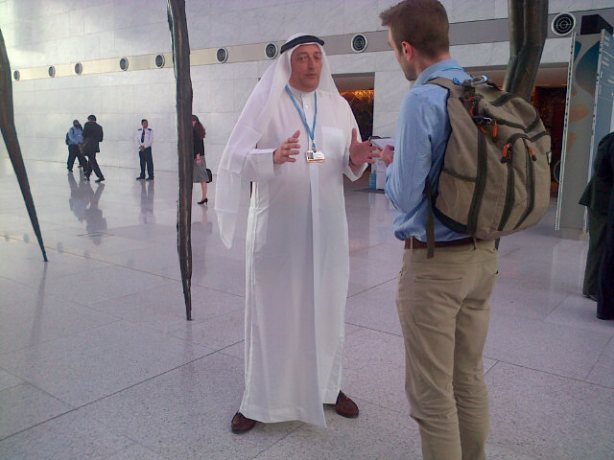 Tallbloke is having a caption contest for this pic.

After the news conference, and as diplomats gathered for the climate conference president’s assessment of how close countries are to agreement, Monckton quietly slipped into the seat reserved for the delegation of Myanmar and clicked the button to speak.

“In the 16 years we have been coming to these conferences, there has been no global warming,” Monckton said as confused murmurs filled the hall and then turned into a chorus of boos.

CFACT are always busy at these conferences.

FLASHBACK — Monckton has been getting evicted from things since Bali 2007

Monckton, David and I were thrown out of convention centre halls, and out of the security precinct when we protested with Christopher Monckton in Bali.

One of the high points was getting this dangerous banner above through the security gates:

They confiscated the banner– but only after reading it. It contained the incendiary words: “No Kyoto 2. New science drives out old fears”.  So the IPCC thinks Greenpeace has a scientific message, but eight people armed with 17 degrees (including 3 doctorates) and a tame banner was too much? After many pleas we got the banner back, and took it away…

I’ll never forget David Evans (my other half) smuggling it back in past the same armed guards 30 minutes later. The rest of us smuggled the lab coats through. (God forbid — lab coats?) A 7m banner is no small thing tucked into a backpack, and there were a lot of guards, and they did search the backpacks. He dazzled the guards by giving them all free copies of The Great Global Warming Swindle. They loved it. I’m sure Martin Durkin would be pleased no end. 🙂 See all those photos…

This video clearly shows the moment Monckton dared make the sane point no one else in the room would make. But the sound is edited — complete silence from 0:48 – 1:03. And most of the mic’s in the room would be muted, so the crowd response would been mostly inaudible in any case. (Shame. It would be good to have had our own camera panning the crowd.).