Jinan Cao has been dissecting the nature of the greenhouse effect and a key calculation that I normally just accept without questioning. This will set a few pigeons loose, but it will be interesting to see where they land. The claims analyzed here are the oft repeated ones that the Earth’s greenhouse effect already warms us by 33°C and that a doubling of CO2 directly causes a 1.1°C rise (that’s with no feedbacks taken into account).

Jinan points out that these numbers, repeated as “fact”, are merely a result of misuse of the Stefan-Boltzmann equation. If Earth is not a perfect black body, but has an emissivity of 0.7 (as satellites suggest), then the temperature of the planet’s surface without any greenhouse effect would not be -18°C, but more like 5°C. That would mean the entire warming due to the greenhouse effect is only around 10°C, not the more impressive 33°C that is usually claimed. It means the greenhouse effect is probably less important than implied.

The 1.1°C direct rise that is predicted from doubling CO2 without feedbacks would also need to be recalculated. This paper does not try to do that, but if Jinan is right, that figure would be significantly lower too. Jinan looks at how that figure was derived. David Evans has been helping review Jinan’s work and writes the introduction below.  —  Jo 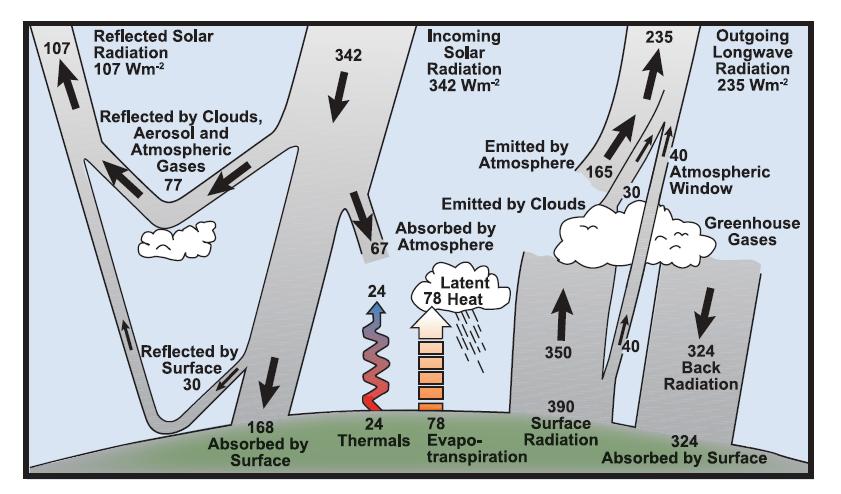 This is the official IPCC version of the Earths Energy Budget as shown in the IPCC AR4 in 2007.

The Stefan-Boltzmann equation describes how much radiation (energy) is given off by a body, such as a planet or a layer of air. It figures extensively in climate science, especially in simple calculations of where energy is flowing on average as the earth radiates heat into space as infrared radiation.

The Stefan-Boltzmann equation is used to obtain known nostrums of the climate debate, such as “it would be 33C cooler without greenhouse gases” and “the direct (no feedbacks) effect of doubling the CO2 levels is to raise the surface temperature by about 1.1C”. The equation is a standard one in physics. Its application to radiation from the earth can be done by any physicist or scientist; only a very rudimentary knowledge of climate science is required. (No mystical climate science secret knowledge relevant here; the laws of arithmetic and physics  are sufficient.)

Jinan Cao clinically dissects several of these applications of the Stefan-Boltzmann equation and finds it has been sloppily applied. Do you think the errors in application by the climate science community work in the direction of understating, or overstating, the role of CO2? Jinan’s article, although technical, is not difficult.

This paper will ruffle a few feathers and deserves a fair hearing. It brings up valid points, and challenges the application of the SB equation that are, by everyone’s admission, somewhat unsatisfactory.

Today’s climate scientists will attempt to laugh off these criticisms by saying that their models are much more sophisticated and accurate than the crude 0-D models considered when applying the SB equation. (A 0-D model treats the earth as a point, with zero dimensions. A 1-D model takes account of one dimension, either height in the atmosphere or latitude. A 3-D model treats the earth as having latitude, longitude, and height.)

But there are two problems with this defense. The first is authority. We don’t know what goes on inside these models, so are we supposed to just take the word of their modelers, that they have got it right? The models are too opaque and not open to public scrutiny, so this amounts to argument by authority. As the motto of the Royal Society says, take the word of nobody. The second problem is that today’s climate science community have demonstrated a habit of exaggerating issues even as straightforward as death threats, so how might they handle issues as vital to their funding as the importance of greenhouse gases to our well-being?

Common errors in the use of the Stefan-Boltzmann equation

Climate scientists frequently make technical errors in their use of the Stefan-Boltzmann equation.

When the Stefan-Boltzmann law is applied to the Earth-Atmosphere system, climate scientists often make one or more of these technical errors:

i)        a coefficient ε in the range 0 to 1, called emissivity should multiply the right hand side, but not when applied to objects that are not black bodies;

ii)      a failure to specify correctly the “surface” and “surface temperature” of the Earth-Atmosphere system;

iii)    a failure to specify whether or not a layer of air is a single object or a cluster of objects.

These errors can be easily demonstrated by examining several statements (methodologies) most popular in current climate research:

1) the 33°C greenhouse warming effect for the Earth;

2) the 390 W/m2 surface radiation in the Earth Energy Budget;

4) the formula for emission by a layer of air.

2. THEORETICAL ANALYSIS
2.1 The 33°C greenhouse warming effect for the Earth

It is repeatedly stated that the average temperature of the Earth would be 33°C lower than today if there were no greenhouse gas warming effect [1-5].  33°C = 15°C – (-18°C).  The -18°C is obtained from equation of radiative equilibrium between the incoming flux from the Sun and the outgoing flux from the Earth:

where r is the radius of the Earth,  α (alpha) is the albedo of the Earth, and S0 (=1368 W/m2) is the solar constant representing the incoming solar radiation energy flux density.  The symbol ε is emissivity of the earth surface.

2.2 The 390 W/m2 surface radiation in the Earth Energy Budget

Figure 1 is a diagram shown in the IPCC fourth report (AR4) as an estimate of the Earth’s annual and global mean energy balance [8-13].

We examine the surface radiation 390 W/m2 leaving the earth ground surface, which is considered to correspond to a blackbody emission, p, at 15°C as per the Stefan-Boltzmann equation (1):

Secondly, the Earth’s mean near-surface air temperature 15°C has been used.  N2 and O2 emit literally nothing at whatever temperatures.  The T in Eq. (4) must be the temperature of the earth ground surface, which is 285.04 K (11.89°C) [6, 7], as determined from outgoing spectroscopy measurements and simulations.  The ground surface radiation then reads:

The emissivity of the earth ground surface, εg, is unlikely close to 1.0.  Black body is an abstraction of a physical concept, hardly any substance is a black body on the Earth.

One can easily understand why the ground surface of the Earth would not completely absorb the 324 W/m2 back radiation because it is never a black body surface.  As these two figures are wrong, many other figures shown on the earth emission tree are called into question.

Let us examine how this statement has been derived.  The energy emitted by the Earth-Atmosphere system per unit time and unit surface area (radiative flux, aka forcing), F, is written:

The derivative of F with respect to T reads:

Derivation including the emissivity reads,

Taking advantage of the relationship between T and S0 in Eq. (2), one obtains:

The error resulting from omission of emissivity thus cannot be more than 10%; it is more a methodological issue in this case.  The problem is, however, that the temperature T, is a physical quantity different from the Earth’s mean near-surface air temperature, Tair(h), which is largely the temperature of N2 and O2 that are literally transparent bodies emitting nothing at whatever temperatures.  The symbol h denotes altitude, almost 0 for near surface.  To estimate CO2 direct climate sensitivity, one must seek the relationship between DTair(h) ~ DF, not DT ~ DF.  There are heat transfer mechanisms other than radiation linking this T and Tair(h).

All the parameters must be consistent with the object defined either explicitly or implicitly.  The CO2 radiative forcing DF =3.7 W/m2 is actually the forcing of absorption by CO2 molecules in the atmosphere.  The outgoing forcing that leaves the Earth-Atmosphere object remains unchanged while doubling CO2, as long as the solar constant and albedo are unchanged.

2.4 The formula for emission by a layer of air

The atmosphere is from time to time represented by a layer (or layers) of air for climate modelling [8]. Consider a given layer of air with temperature, Ta, and surface area, S, as shown in Figure 2. In current climate research the Stefan-Boltzmann Equation is straightforwardly applied to obtain σTa 4 for emitting energy flux density of the air layer. It is treated just like a sheet of solid (or condensed matter) object.

There is a fundamental methodological error here.  Because the emitting species are so sparse in air, a given layer of air can not be identified as a single object applicable to the Stefan-Boltzmann law (strictly speaking, Planck’s law).  The correct methodology is to identify each single radiative molecule as an object that emits according to its temperature and radiative bands, forming a cluster of objects within the layer of air.  How much the layer of air emits must be determined by summing up all the radiation energy density emitted by each individual molecular object upon the surface S.  The principle of formulation is shown in a simple example as follows.

is another coefficient (0 < ζ <= 1), which is missing in the current climate research.  Note ζ = 0 for n = 0, and ζ approaches 1 as n is sufficiently large enough in a given volume.  This coefficient applies as well for the Planck distribution function.

Eq. (11) indicates the flux density is very much depends on the number of objects within the air layer.  If the radiative objects are not dense enough within the air layer, the term of summation will be a very small fraction.  A strict mathematical expression can be formulised along this line but omitted in this article.

(This html version above may contain typos or errors as it was copied from the original. If in doubt, read the pdf!)

Jinan Cao is keen for feedback.

UPDATE: Michael Hammer writes a most well informed and thoughtful response at Comment #19