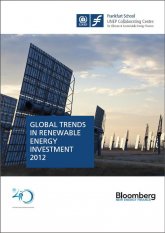 In June this year the UNEP report announced that Global Renewable Energy investment reached $257 Billion in  2011. It’s so large it rivals the $302 billion invested in fossil fuel power. But how much electricity do we get for all that money? When the details are pulled from the fog, a quarter of a trillion dollars appears to produce only about 3% of all our global electricity, and even less of our global energy. All that money, so few gigawatts.

“…despite an increasingly tough competitive landscape for manufacturers, total investment in renewable power and fuels last year increased by 17% to a record $257 billion, a six-fold increase on the 2004 figure and 94% higher than the total in 2007, the year before the world financial crisis.”

“Although last year’s 17% increase was significantly smaller than the 37% growth recorded in 2010, it was achieved at a time of rapidly falling prices for renewable energy equipment and severe pressure on fiscal budgets in the developed world.”

The last couple of quarters have not been good for renewables. (Click to enlarge).

Gross investment in fossil-fuel capacity in 2011 was $302 billion….

So how much electricity does all that investment get us?

At a glance, the numbers in the report look impressive. The UN don’t have much interest in adding graphs like these, though they have 50 figures in the glossy report.

Trick 1, is to refer to “capacity” and not so much to actual production.

–     In the power sector, renewables accounted for almost half of the estimated 208 gigawatts (GW) of electric capacity added globally during the year. Wind and solar photovoltaic (PV) accounted for almost 40% and 30% of new renewable capacity, respectively, followed by hydropower (nearly 25%). By the end of 2011, total renewable power capacity worldwide exceeded 1,360 GW, up 8% over 2010; renewables comprised more than 25% of total global power-generating capacity (estimated at 5,360 GW in 2011) …

The UNEP say renewables comprise 25% of the capacity, and we all know (thanks to Anton Lang) that their capacity is wildly overrated. (Coal fired stations produce at somewhere around 75% of capacity, while solar can be 5 – 20% of its capacity). Capacity is a hypothetical number that is achieved in perfect circumstances. It literally depends on the weather, and when it’s dark and windless, we get nothing from solar and windpower, those moments they are running at 0% of capacity.

Trick 2:  When they do refer to production they add hydropower to the renewables “generation”:

…and [renewables] supplied an estimated 20.3% of global electricity.

As we showed with EIA statistics, most of that 20% comes from large scale hydroelectric generation, but most of the renewables investment is going into wind power, and especially last year  — into solar.  Readers may not realize that while “all renewables” appear to be successful, most renewables contribute next to nothing.

This point is all the most apropros when we look at the value of the investments. Of the $257 billion in renewable investments, a whopping $147 billion was invested just in solar power – the renewable source that generates less than 0.1% of global electricity. And as  for hydro — wheres the hydro? There is no large scale hydroelectric power in the $257 billion statistic, even though there is a lot of hydro in the “renewable energy statistics”.

Let’s look at global energy production with and without hydro in the mix. Click to enlarge the table (below). Notice in 2011, “new investment by sector” has only $5.8 bn in investments for “small hydro”, and there is no large scale hydro category. In Fig 25 of the UN report, all renewables plus small hydro produce 6% of global electricity (compared to the 3% figure the EIA estimates for non-hydro renewables power. Possibly small hydro produces as much electricity as all the other renewables combined?). Wind and solar are never left to stand alone against the might of fossil fuels.

Total investment in solar power jumped 52% to $147 billion, while curiously, investment in wind power fell 12%. Wind was the dominant renewable dollar winner previously. (Perhaps people are realizing the folly…?) Biomass and biofuels were similarly on the nose.

The money is going into solar and wind power

Trick 3: Shine up percentages by talking about capacity added rather than total capacity.

“Capacity added” flat out ignores all those 1 – 50 year old fossil fuel and nuclear stations which supply most of the worlds energy. Thus making it easier to paint a picture of renewables storming the world with success. Here’s an example from the UN report.

Renewable power, excluding large hydro-electric, accounted for 44% of new generation capacity
added worldwide in 2011, up from 34% in 2010, and 31% of actual new power generated due to
the intermittency of the wind and solar capacity added.

By talking about “power added”, or “capacity added” the numbers seem important. That’s because most of the equipment that generates reliable, efficient electricity is old.

This updates the tally I wrote about here last year Clean energy “investments” just a tiny $243 Billion in 2010. It’s not a small industry. But the climate denier industry (whatever that is) is somehow operating on 0.001% of the budget (if that, and in my dreams) yet that is the one some psychologists fear is having all the influence.

Trick 4: To make other forms of energy “competitive” use large error bars, and add imaginary error bars to fossil fuels to make them appear “similar”.

WARNING: All the numbers in the chart come through the UNEP filter.

There is another trick. They refer to megawatthours produced, (i.e. mandatory subsidized purchases by the grid) and NOT fuel substitution. BIG difference.

There are some numbers from Holland confirming the Falklands experience: 4% (FOUR PERCENT) fuel savings. 4% of nameplate capacity, corresponds to annual, average conventional fuel substitution. I believe that this is the slimiest trick, as it is the most obscure to comprehend (or document).

[ From that second link: While wind energy was producing 18% of the electricity of the Falklands, it was only saving 4 – 8% of the fossil fuel. – Jo]

A very expensive black hole. They are frantic about interconnections to hide the fact. Australia will be just like the Falklands (an isolated grid) except a lot more expensive. Never mind E.ON had sort of predicted that in its 2005 report.

These characters get paid for electricity they force on the grid, without saving a substantial fraction of the corresponding conventional fuel! This is consistent with findings regarding no substantial CO2 savings (assuming you care about beer gas)

Thanks to  archaelpteryx and other commenters for an informative thread.