So much for that global “free” market.

Scott the trader writes to explain that the EU “CER” credits are the ones people can buy and exchange for Australian Carbon Credit Units (ACCUs) but they have sunk to $4. The more expensive $9 EUA units that most commentators mention, are not exchangeable in the Australian market:

“The EU CER price is equivalent to about A$3.80  per tonne…  Almost $20 below Australia’s fixed price.    These are the products most comparable to Australia’s $23/Tonne as it will be CERs that we can surrender instead of Australian Carbon Credit Units (ACCUs) to satisfy an Australian Clean Energy Scheme liability.   It is incorrect as most media commentators are doing in Australia to compare to EUAs which are at about $9 Australian.  Australia cannot access EUA’s to satisfy our carbon liabilities.  The only comparison is $3.80/T for a CER and $23/T for an ACCU.”

So most commentators are comparing the wrong type of carbon  credits, and the Australian market is even more overpriced than  people recognize. Australians will be paying 500% more than the largest carbon market in the world.

The Australian scheme is the most expensive, and most ambitious in the world. On top of that we are a distant market based heavily on fossil fuels. 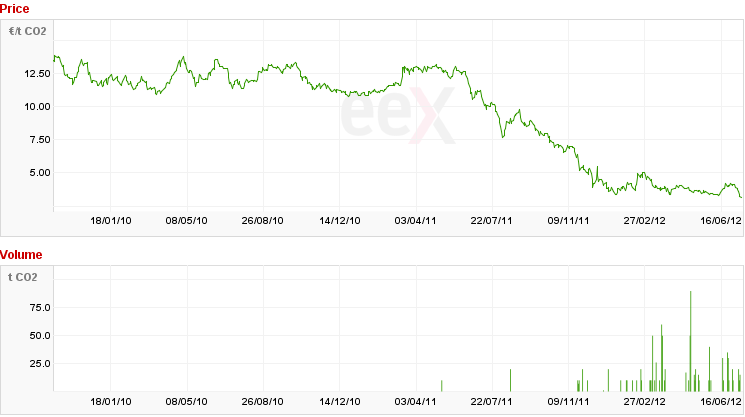 LONDON, July 16 (Reuters Point Carbon) – CER prices sank to a new low on Monday within touching distance of 3 euros as traders continued to offload the offsets amid plentiful supply of cheaper ERUs, which can also be used for compliance in the EU’s Emissions Trading Scheme.

The benchmark December 2012 secondary CER contract closed at 3.18 euros, the day’s high, but down 2 percent on Friday’s close as traders continued to unwind long positions.

In afternoon trade the U.N. offset slid to a record low of 3.08 euros.

“The feeling is that with increased ERU supply coming into the market, there’s not much reason to hold onto CERs, particularly because of oversupply in the carbon market as a whole,” said one trader, adding that 3 euros was a critically- important support level.

Natural gas prices are falling, so electricity producers are switching to the cheaper and lower emission fuel, which means they don’t need to buy as many carbon permits.

As I’ve said all along, those who call for a “free market” solution are the ones who don’t know what a real free market is.

UPDATE: This AAP article July 1, 2012 explains that Australian’s who buy cheap CER units have to “top up” the amount to the government approved price of $15 per unit:

“Traders are also awaiting final rules on how to implement the floor price on international units. An Australian emitter that buys a foreign carbon offset, such as UN-backed Certified Emission Reductions (CER), below the floor price will have to pay money to the government to ensure it did not get the offset cheaper than $A15.”

The Climate Spectator confirms that it is the CER price that the Australian and New Zealand schemes are tied to.