It’s all up on Watts Up now.

What Anthony Watts and Evan Jones have revealed is breathtaking. 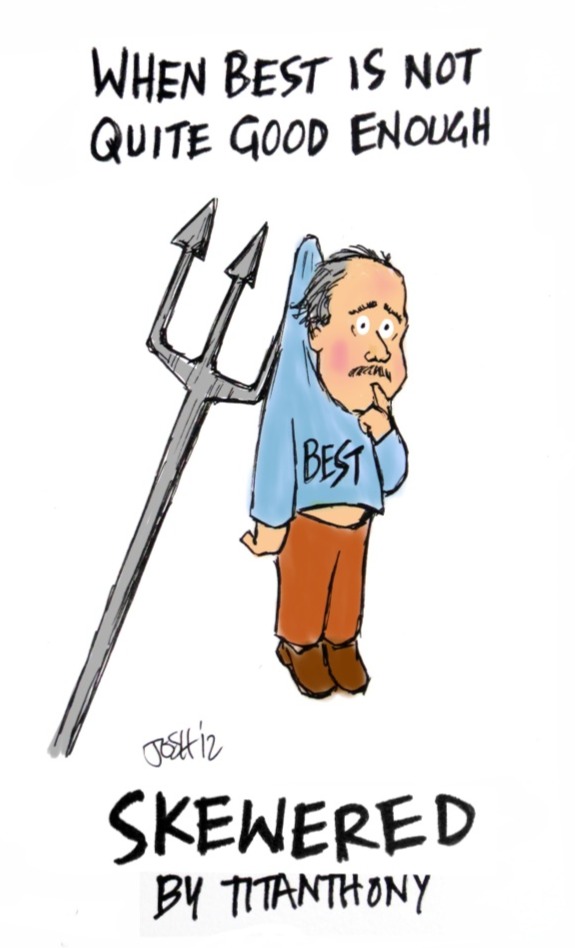 [Art thanks to: Cartoons by Josh]

This new pre-print paper by Anthony Watts accomplishes so much. Assuming that no major problems are found, the pieces of the jigsaw fit and pass the common sense test. Yes, hot air rises off concrete.

You don’t need a PhD to know that thermometers placed in car parks are not measuring global warming.

Only gullible fans of authority would believe the incredulous claim that statistics can correct for gross mismeasurements. Unless those researchers had details about when air-conditioners went on and off, when concrete was laid, relaid, changed to asphalt, when cars parked nearby, and how windspeed affected that warming on an hourly basis — they can’t correct for the errors introduced by those things. They don’t have that data, and even if they did it would be exceedingly unlikely it would be sufficient to extract the signal of regional warming from the noise of the artificial heat sources around the thermometer. It would be a whole PhD thesis just to accurately account for a single surface station, and that’s if they had the data on that minutae, and we know they don’t.

This is a paper that will be quoted and requoted. It’s five years worth of work, unpaid, done late at night, entirely redone in the last year. We all owe Anthony Watts and Evan Jones, plus Steve McIntyre  and John Christie, plus many others (like all the volunteers who did site-surveys)  more than a huge thank you. Watts has taken on giant institutes like NOAA, GISS, Hadley, East Anglia, they with billions at their disposal – and he’s won. Sure, this won’t be the last word on it, but where are the real climate scientists who say enough is enough and they want junk thermometer records deleted from “high quality” compilations and they want adjustments for artificial warming to cool the result, not exacerbate the error?

There’s a newer method to categorize stations into five classes and this makes all the difference.

Leroy’s 1999 classification system is out and Leroy 2010 is in. Menne 2010 and Muller et al 2012 both used the old system. Anthony Watts uses the new system and says it makes all the difference:

The new Leroy 2010 classification system of surface weather stations shows that only 20% of stations are adequate (Class 1 plus Class 2).

The trends as recorded by good thermometers are very different to the trends recorded by the bad ones. Class 1 & 2 show only 0.15C warming per decade (which is slightly less than what happened in the 1870’s). Class 3 – 5 (the badly sited thermometers) recorded 0.25C per decade. There goes nearly half of all the catastrophic warming. Worse though, is the miracle of modern adjistering – where two lower numbers are “averaged” up to an even higher one. Post-normal maths?

The new official adjusted result bears no resemblance to the observations. Why bother having thermometers?
..

Airports can make even a good thermometer useless

On a micrositing level some airport stations may appear to be ok. But on a mesositing level they affect the results, rather a lot and since about half of global stations are based at airports this is rather a killer point. Airports are excluded from this graph below. Compare it to the graph below that.  The blue bars are the trends in the mean temperature for the best thermometers (class 1 & 2) in different US regions. The yellow bars are the class 3 – 5 stations — the badly sited ones — and obviously they are higher.

Ominously, the red bars are the adjusted combination of the two lower bars. Its what happens when you mix good data with bad data and then multiply the errors with statistics. It’s possible to turn out truly awful “results”.

When airports are included the raw readings in the well sited thermometers are much higher (below). The pilots all need to know the temperature of the airport, but as far as taxpayers are concerned, the airport does not represent the environment of the surrounding 100km (or 1200km give or take the smoothing techniques you care to use).

Below the different types of sensors are compared. MMTS are the electronic modern thermometers, and they generally record lower trends, especially for mean and max trends. But like any good piece of equipment, they too can be adjusted to mimic older less reliable tools, and show higher temperature trends than were actually recorded.

Notice how in every second column the blue diamond (MMTS) is adjusted up to match the other older or less accurate equipment.

Below, the rural MMTS stations, (without the small rural airports that are sometimes equipped with MMTS equipment) have the lowest decadal trends of all classes and subsets of stations. (Blue bars)

The new MMTS electronic sensors were found to be much lower than the others. Some of these regions recorded a cooling trend when only rural stations with an MMTS thermometer were used. As usual, the red flag “adjusted” trends are the result of statistical dynamite.

Do visit Watts Up to read the whole paper and watch the fallout unfold. Donate to help him continue this essential and excellent work. What is posted here is just a part of the picture, there are 21 figures at least: see it all on Watts Up now.

Watts up also has the powerpoint files. The full PDF original and hundreds of comments. 🙂

Thanks to Josh for the cartoon. Thanks to Anthony for so much, including the advance notice.