UPDATED AGAIN #4 — Now with Vukcevics Hale cycle graph of Echuca.  and #3  David Archibalds suggestion of the Hale Cycle at work. #2 with Willis Eschenbach’s graph and my thoughts, (see below)

Ian Bryce sent me a striking graph (or two). Looking at the original raw data from Echuca Victoria shows a dramatic cooling trend of nearly half a degree since 1900, and rather than being a siting anomaly, it’s repeated in two towns about 100km away.

Curiously he also finds peaks in the maximums at Echuca that look for all the world like they match the solar cycle. Is it a fluke, or could it be real?  If it’s real, what conditions make the solar sun-spot cycle so apparent in Echuca — where its maximum temperatures seemingly peak with each second solar cycle. Can anyone find this signal in other places? — Jo

The area is inland Northern Victoria

Has there been Global Warming or Global Cooling in Echuca

I have spent about 37 years working with processing tomatoes in the Goulburn Valley in Australia, and the last 25 years or so, with research into growing and processing canning tomatoes. Since 1984, our industry in Australia has trebled the tomato yields from our paddocks, which is quite extraordinary. I was wondering whether yields have partially improved due to hotter temperatures, and increased carbon dioxide.

Most of our tomatoes are grown within a 100 kilometre radius of Echuca, so I decided to look at the temperature data from the BOM for that site. It is a high quality site according to the BOM, and has a long temperature record. It also has a small population (10,000?), and therefore should not experience the “Urban Heat Island” effect [at least not at the rural airport, where the thermometer is — Jo].

Echuca is on the Murray Darling River (top left) Wangaratta and Benalla are on the plains to the West of the Snowy Mountain Range.

The only other high quality sites in our area are Benalla, and Wangaratta. Echuca is about 200 km from the coast and about 100 km inland from the Great Dividing Range. So it has an inland Mediterranean climate with hot dry summers and cool wet winters. It is about 36o south and 96m above sea level. North and west of Echuca are flat plains for hundreds of kilometres.

Below is a graph of the Echuca mean temperatures, which is the yearly average of the maximum and minimum temperatures. I was most surprised to find that the temperatures had decreased, rather than increased, and therefore the tomato growth should have been slower with the lower temperatures. So obviously the yields increased due to better tomato varieties and better farming techniques.

I then decided to check Benalla & Wangaratta as well, and low and behold the result was similar, with temperatures decreasing in both cases.

Jo Nova suggested that I contact Frank Lansner (Hidethedecline), who has undertaken the painstaking work of graphing all the temperatures around the world. In Australia he has divided the data into different climatic sites, including South-East Australia. His graph for about 52 sites is at the bottom. Once again we find that the temperatures are trending down. This was also confirmed by Ken Stewart (kenskingdom) in Australia.

The thing that intrigued me about the maximum temperatures is the high peaks, which occur at the peak of the odd solar cycles, and four other times, when we had strong El Nino events. (Most recently, three in four years) It is interesting to note that we did not have the Super EL Nino in 1998!

One wonders when our climate scientists graph global mean temperatures for tens of thousands of stations worldwide, that they “miss the wood for the trees.” I contacted the BOM some time ago about this phenomenon, but I have not had a reply yet. (Surprising?)

I am not a climate scientist, but an Industrial Chemist, and was wondering whether your bloggers may be able to shed some light on why the temperatures peak every second solar cycle, and secondly, why the minimums are reducing, but the maximums remain steady.

Also the thought came to mind whether there may be a similar site in the US, which may show a similar pattern, but might have the peaks on different solar cycles?

ADDENDUM: The falling minimum trend across this region is clear in the three graphs here: 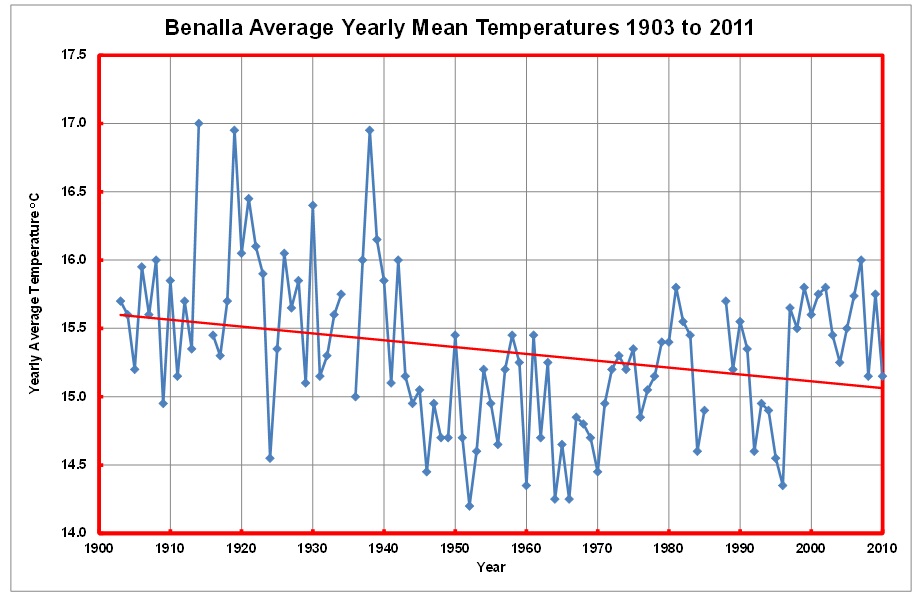 Frank Lansner agrees and provides a graph of 52 locations nearby: 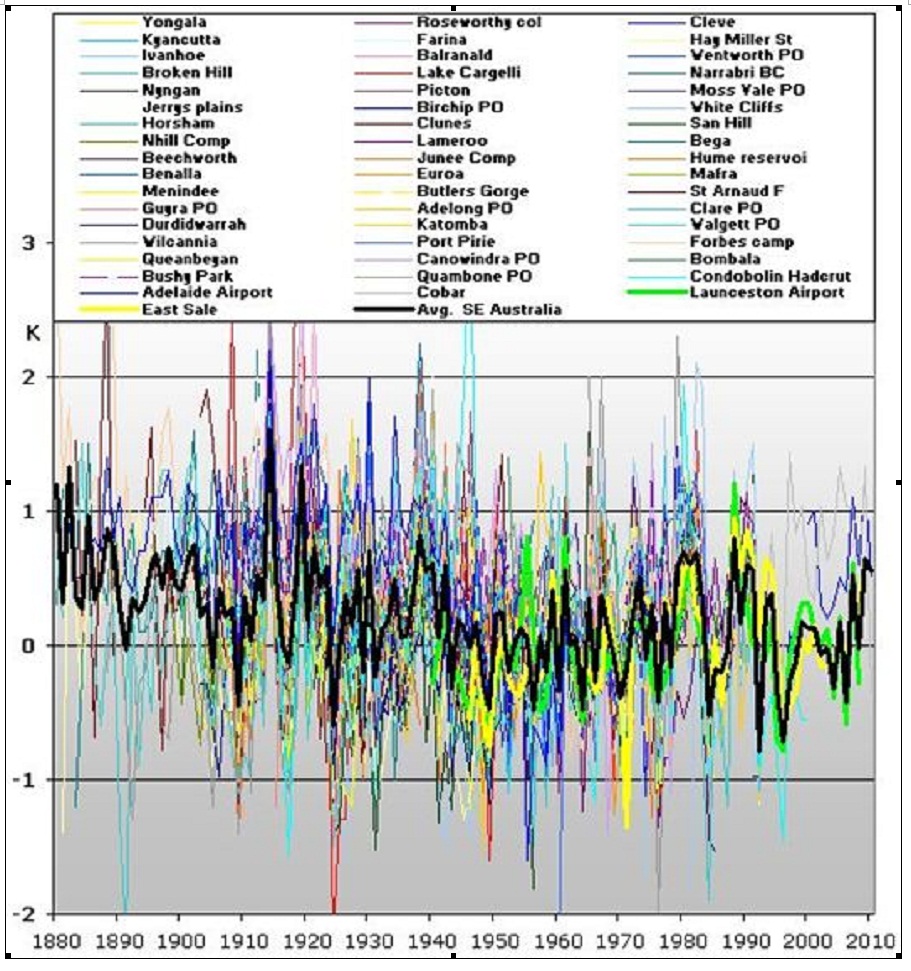 Thanks to Ian and his dedicated patience waiting for me to code this together.

Not sure why I usually end up being the one to rain on the parade, but I’ve accepted my lot in life. Here is the Echuca data plotted against the peaks of the solar cycles, as measured by sunspot counts.

There is obviously a peak about 2 years after the solar max in 5 of the 6 cycles.

Jo Nova replies: Thanks for the extra detail Willis.

You are not pouring cold water on the parade at all. I posted it as a “curiosity”, wondered if it was a one off fluke, didn’t draw any major conclusions. What parade?. Clearly it is worthy of discussion. No big conclusions can be drawn from one graph, and we didn’t do that. Instead it’s done just what I hoped, generated an interesting thread — in no small part thanks to you. 🙂

It’s clear in your graph that temperatures rise soon after the solar max in 5 out of 6 cases – as if the solar max effect may have a two year delay. The years circa 1901, 1916 and late 2000′s break the pattern (and the first two of those occur in a discontinuous early part of the series), but for 80 years from 1920 – 2002 we see a strong cycle that tightly fits with each second solar cycle delayed by 2 years. My original point remains, that this may be random, unless we see it at other sites (thanks to commentators who report they may have seen this elsewhere. )

Obviously other factors are also affecting the climate producing some noise? (Do I need to say this — seems obvious?)

There is plenty of fodder for more investigation. I hope someone can follow it up properly.

Every generation is rediscovering things that had been done before. Echuca is a good example of the Hale Cycle. There are plenty of references to the 22 year cycle in rainfall. Here’s a few:

http://www.geo.umass.edu/climate/theses/waple-thesis.pdf
The Hale (22-year) cycle has for some time been invoked as a possible reason for a bidecadal drought rhythm in the Southwest USA and Great Plains. It is possible that this apparent cycle of drought could be due to internal variability of the ocean-atmosphere system, but as Cook et al. (1997) indicated, it is also not easy to eliminate the sun (and moon in this case) from the causal hypotheses. It appears from Cook et al.’s findings, that since at least 1800, the lunar cycle
(18.6 years) and the Hale cycle interact to modulate the drought cycle.

From: http://www.springerlink.com/content/a2geaywxlu5dan8w/
The investigation results of the monthly precipitation and Palmer’s drought severity index (PDSI) data in three of the midwestern states – Illinois, Indiana and Ohio – show that two periodic components, the 20 to 22-year Hale cycle signal and the other component with periods between 16.9 and 13.5 years, are identified.
Also see the chapter “The Twenty-Two-Year Drought Cycle in the Western United States” in “The Role of the Sun in Climate Change” by Hoyt and Schatten. It starts on page 138.

Ninderthana points to a very interesting blog on maximum temps at Adelaide and the correlation with the Hale Cycle.
M A Vukcevic compares Echuca temperatures to the Hale magnetic cycle. (Thanks for permission to post).