Global Carbon Market trading climbed to $176 billion in 2011 according to the The World Bank, which has just released it’s annual State and Trends of The Carbon Market in 2012. That makes it about the same value as total global wheat production — which supplies about 20% of the calories consumed by the 7 billion people on planet Earth.

The global carbon market disguises itself as an angel against the greedy corporates. Yet it is, itself, a giant corporate playing field. The mainstream media remains largely silent on the “vested interests” represented by this major industry that did not even exist 10 years ago. 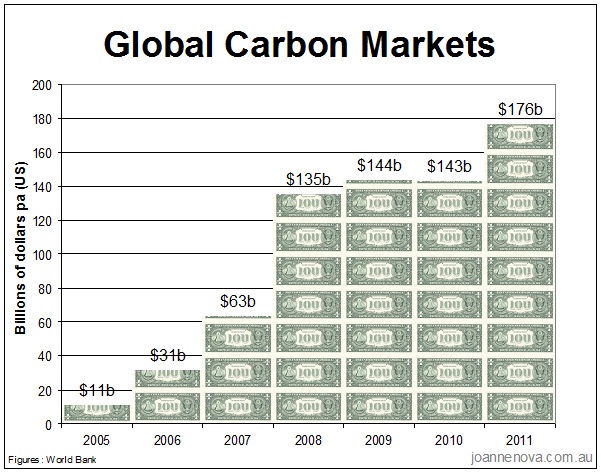 Global Carbon Markets are worth billions

Was 2011 the peak of global carbon trading? Looks all downhill from here.

A record number of emissions products were traded in 2011, even though prices of EU carbon permits and international offsets fells well below $10 a tonne late in the year. The prices have fallen, but the volumes have increased. Look out, the average price in 2011 was $18.80US, but the prices in 2012 are  less than half that. It will take a monster increase in volumes in 2012 to keep raising the total market value.

The Global Carbon Market was still growing in 2011, but not exponentially like it was from 2005 – 2009. The bad news (for carbon traders) is about to hit the fan in the next report in 2013. There is a hint of it in the page announcing the report: “the market for primary CDM has dropped to its lowest level since 2004.”

The EU is 80% of the total market. Everywhere else is piddlingly small:

But front-year EU carbon prices are averaging under $10 a tonne so far this year as the bloc’s sluggish economy dampens demand for carbon permits in a market that analysts say has accumul1ated a surplus near the equivalent of 1 billion tonnes.

Remember that someone somewhere is paying this money that is poured into a trading scheme we don’t need to solve a problem for which there is no supporting evidence. The voluntary market is one three hundredth of the total. Without forced legislation this market would vanish. (Let the people vote, eh?). This is $176 billion of economic activity wasted, mostly in the economic disaster zone that is the EU. People are rioting in the streets. That’s blood, sweat and tears to build things and do things the people on this planet would not choose to do if they were not forced to.

Read on to find out more…

Prices peaked in 2008 but have fallen a long way.

The spot contract is for carbon emissions that have already been saved (if only that was useful), but the futures and options market is for emissions that might be saved… one day. In other words, only the smallest part of this market is actually referring to real present day reductions in CO2, and even that part is hard to assess, prone to fraud, difficult to audit, and subject to government whimsy about which savings “count” and which don’t.

There is barely any commodity in this commodity market and it’s becoming less so. 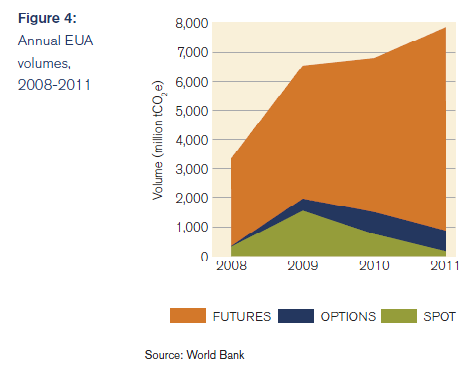 The CER market peaked in 2007 and has never recovered. 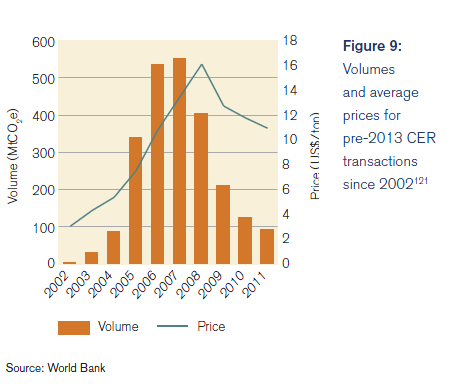 Climate Alarmism is Big-Business for The World Bank

In 2010 the World Bank was managing $2,388 million dollars worth of projects. It’s not like the World Bank has a vested interest in this market… What bureaucrat would like to give up the power to hand out these funds?  The patronage and favors, the status gained from wheeling and dealing with these funds is enormous. It’s an example of why governments of all kinds grows and grows, and why common rational sense, the push-back, can only come from independent citizens, possibly helped by the sectors of the economy that suffer from poor policies. 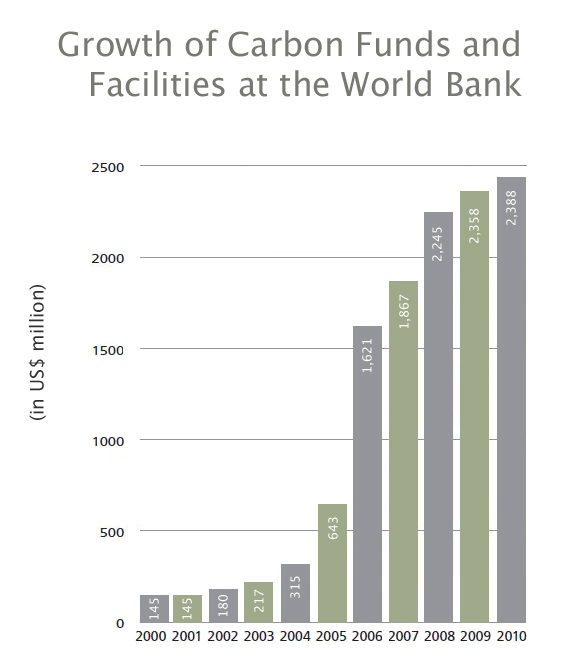 UPDATE 2013: The World Bank canceled the State of The Carbon Market in 2013. All indicators suggest the market collapsed. The numbers would have broken the upward trend and not “helped” the PR.

World Bank:  State and Trends of The Carbon Market in 2012.