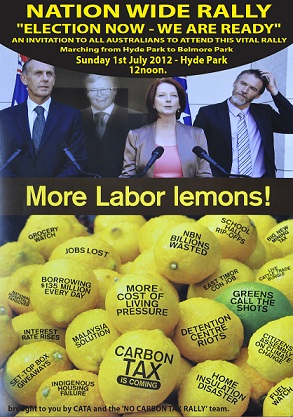 CATA have organised a protest

Where:  Hyde Park, Sydney and Steps of Parliament House, Melbourne

A convoy of small business and business vehicles will also lead the march prior to the rally in Sydney.

CATA encourages everyone to  attend and make it known to all politicians that we will not be had for fools, this tax must be and will be repealed.  Bring your banners, your loud voices as we let the Gillard Labor Party know they have no mandate for this tax and we demand an election as our democratic right.

UPDATED: I cut and pasted the release, but have since taken out the image of the cartoon-symbol of the baseball bat. I realize the only baseball bats there will be inflatable ones, but it’s not a symbol I would have chosen. — Jo

UPDATE #2: Andrew M has proposed a lunch in Brisbane on Saturday:  Belvedere Hotel at Woody Point/Redcliffe. Drink Champers and Beer to enjoy the last carbon-tax-free-day. Have a look at Australian pokies website to play online pokies. Any other suggestions from other cities? Do speak up. His comments were in the next “Paul Bain” thread.