The world is so poised on the edge. The jitters are sweeping through tonight.

Just suppose you have $100m in assets that you are nervous about. You cannot stick that amount in a bank, because government guarantees only cover the first $1m or whatever, and banks are all risky now. So you buy into the biggest, most liquid market in the world — US Treasury bonds, that is, the debt of the US Government. Sure, you risk losing a few percent as bond prices jostle up in the panic, but at least you preserve your wealth. So you sell your assets, convert the proceeds to US dollars, and buy US Treasuries.

So much money had run to US Treasury bonds  that the yield — which was at a record low yesterday — just got a lot lower. People are happy to give their money to the US government for an historically low yield.

Yesterday things were more scary than any time since WWII:

On Thursday, benchmark 10-year Treasuries yields fell to a historic low of 1.5326 percent, according to Tradeweb. The previous low was in November 1945 when yields ended that month at 1.55 percent.

Tonight, things are more scary than any time since Napoleon:

Benchmark 10-year Treasury notes were up as much as 1-4/32 in price with a yield of 1.442 percent, the lowest level since records going back to the early 1800s according to Reuters data. 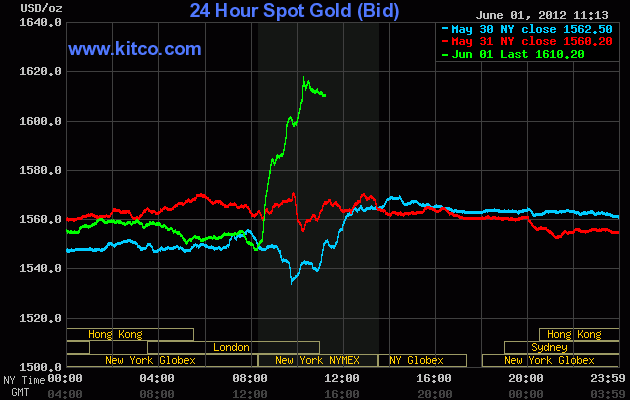 If (when) the current money system of creating money/debt out of thin air falls away and is curtailed, the growth of big government that it fueled might also fall away (says David) or it might get bigger — a whopper crisis being the GoldStar-best-excuse to call for even more regulation (says Jo — did I mention this was a joint post?). Part of the collateral damage will be the climate change agenda, of government regulation of all energy use worldwide.