The game is up when everyone knows the only way out is printing money, because then everyone knows inflation is coming, and the bun-fight begins. Everyone wants the wage rise, the payment now, and to buy the commodities that they won’t be able to afford tomorrow. Price tags begin that rising spiral. I don’t think we are on the verge just yet, but it can’t be that far when someone like Murdoch is broadcasting it.

The only question that matters then, is are they “printing”, and how long have we got?

US Money Base Figures

You can see the moment Lehman Brothers went under. It’s that “bend”. 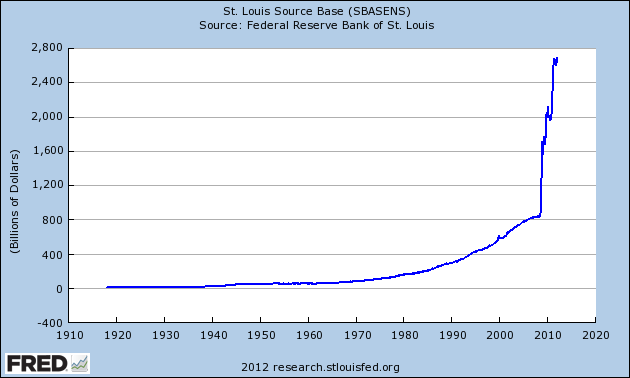 That graph again, logarithmically, so we can put the last 90 years in perspective. Remember the oil crisis, the Vietnam War, the 1987 crash, LTCM, and the dot com burst? They don’t rate.

The depression and World War II — they did rate — and you can see below, that this latest “bump” is… err,  steeper. (Don’t we all feel good about that eh?) If you are looking at these graphs for the first time and feeling queasy, good news, you might be sane. If you wonder why I’m not leaping up and down, pointing out that the current monetary hiccup is worse than World War II fergoodnesssake, where some 400,000 US citizens died, it’s only because we’ve been watching this trainwreck for three years. (See Helicopter Ben at work, Nov 2008) 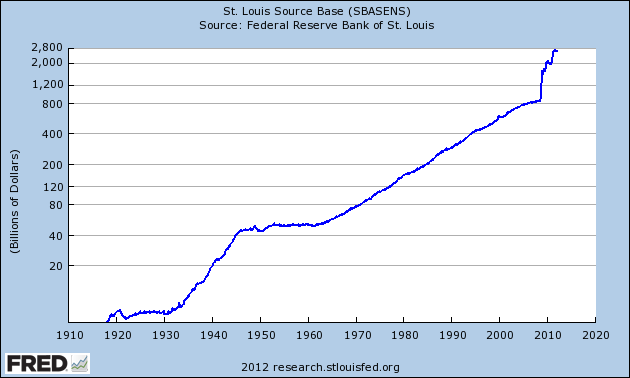 The money base  is made up of the deposits of commercial banks in central bank accounts plus actual dollar notes and coins floating around in circulation. Over time the commercial banking system amplifies this “base money” by creating and lending out “bank money”, usual by a factor of 10 -20. Bank money is the stuff in bank accounts at commercial banks, what the public knows as money but that the banks call “credit” (and yes the word “credit” has other meanings too). (Under the old fractional reserve system the ratio of base to bank money was usually a fairly simple 10 to 1, but the under the Basel Accords, which have governed western banking since around 1990, the reserve fractions are not as relevant as the amount of bank capital, the quality of loans, and the amount of deposits. In addition, the practice of “retail sweep” has rendered the reserve requirements mainly toothless since the early 1990s.)

As this extra base money gradually feeds out into the system, it is allowing commercial banks to make more loans (which they do by simply changing the number in a bank account, thereby creating more bank money, and simultaneously writing down a matching liability on their balance sheet e.g. your house deed).

Here is a graph of US M2, a broader aggregate of money supply. It has that exponential look, don’t you think? 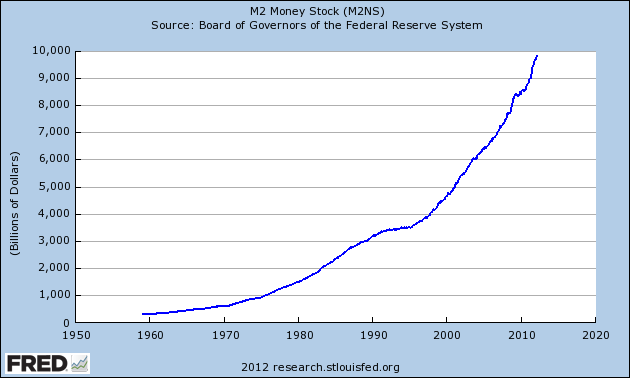