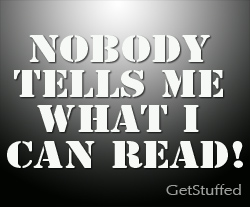 I haven’t read the whole 400 page Finklestein report, but Mark Steyn tells me that the Chinese government likes it. What more do you need to know?

As Steyn says, this is not a left-right thing, it’s a free-unfree thing.

Tim Andrews at Menzies House launches a New Free Speech Campaign: “This is a proposal that would seem right at home in North Korea or Zibmabwe. I never thought – as dark as things seemed- we could stoop this low here in Australia”.

People asked me if this would “affect your blog”. Ha ha, I laughed, Will it? Right now, I’m discussing whether I’d need to move to Fiji, or Florida, or become a citizen of the Dominican Republic in order to express my views. Could I split my blog into a different domain name each day to avoid being “monitored”? ( I could have 365 blogs: joannenova1.com.au, joannenova2.com.au… it would play havoc with the search engines.) Alternately, perhaps I write 100% satire, cartoons, irony, and the exact opposite of what I mean? Ho Ho. Who has the rule book on the Soviet black market for ideas? What can we learn and how does it translate in this Internet era?

If all this legislation achieves is to force me to invite Tim Flannery to do a post here, all I can say is Yes Please. Bring it on. But we all know that requirement would mean that instead of gaining “balance” we would gain silence. Because Flannery only has to say “Sorry I’m busy for  a decade” and what, Joanne Nova has to hold all her posts until he finds the time? Paradoxically, though we could use the legislation to force the ABC to mention the unmentionable — except that in the end, selective enforcement by an unelected Big Brother team would decide what information was “safe” for Australians to read. And that pro-big-government team already thinks the ABC provides enough skeptic content (i.e. almost none).

They pretend it’s about serving the public. But the Finklestein report is aimed at skeptics and disabling the Murdoch newspapers, and the submissions were mostly from professional lobbyists. The “bias” category lists skeptic crimes according to well known warmists. Eighty-six percent of the 10,000 submissions the Inquiry received  were boilerplate copies from Avaaz (foreign group),  GetUp or “NewsStand”. GetUp support Avaaz, and NewsStand turns out to be a front for GetUP. All of them say they are for “Free speech” (as long it’s pro left-green speech). Avaaz and GetUp betray their lack of principles,when  they run open “hate media” type campaigns against Murdoch papers.

Simon at Australian Climate Madness points out the futility of trying to stop an international information flow. “The Australian government cannot legislate regulations to take effect over media organisations outside Australian jurisdiction, without bipartisan agreements between those other states. I do not foresee this happening – for example in the US, the First Amendment prohibits any law infringing on the freedom of speech or the press.”

But then, if the government control the fibre-optic cables, perhaps they really can block overseas sites. Is that why the Labor Party thinks renationalizing Australian telecommunications into the NBN (National Broadcast Network) is “good value” so they can bring sanitized propaganda to every home? Will skeptics laugh at the toothless tiger from overseas sites, or end up broadcasting from moving vans via CB radio? Will anonymous twitter-hack networks spring up to defeat the ruling? Either way, the nation spends more of its intellectual wealth fighting a bureaucratic maze instead of fighting lies, half-truths, and Gongo-ideas.*

The power of one voice

I finally met The Man (Mark Steyn) last night at his Perth speech. Brilliant, brave, inspiring, and it absolutely made-my-day (in a career highlight kind of way) that he knew straight away who I was. He had quoted my Climate Money paper in 2009, and he spoke of it immediately. Forgive me for the shameless brag.  Some days I wonder if an audience of 5,000 readers a day matters, but then I find a famous cartoonist, author, or member of parliament who reads the site, and all the work seems worthwhile. I’m reaching the people that matter.

I almost never reveal the names of the influential readers. (It’s not like I’m doing them a favor by telling the world). Lately there have been many, and I met another last night. As I dryly commented to this particular policymaker who’d come up to praise me and shake my hand: Thankyou. I’ll add your name to the list of people who I can’t say reads my work!

But this is the key isn’t it? The power of the internet is such that one person out of 7 billion can speak a truth that was unspoken, and the message spreads and silently reaches those in the highest circles of influence. Free speech is the greatest of gifts for humanity. It unleashes the best of billions of brains. The internet is changing the power-structure of societies, and the ruling class don’t like it at all. The fact that their ideas are so weak and that they are so defenseless against sharp observations, is is exactly why they have to regulate it.

Bob Brown, we know you are afraid to let Greens policies be debated. Actions speak louder than words.

How much of our right to speak will they take away? As much as we let them.

We must aim for the total absence of an Independent Media Commission. Their current ambit claim will be watered down, 15,000 hits a year will be negotiated to 150,000 hits a year and it will still be a noxious, nasty, evil piece of work.

Free Speech is free speech. It doesn’t come with a limit.

Menzies House is pursing this legislation.

Prof Bunyip calls it the Finko and Rickety Review. (Streuth, this is the kind of ruling they want more of?)

Prof Bunyip (Speak up while you still can) recommends (as do I) that we start sending letters to University Chancellors to ask them to remove any lecturer of journalism that endorses censorship (lest their institute be exposed for a patsy lap-dog government entity). See his post for details.

*And you thought I just made up that word. Actually I did. But then I discovered it means something and Gongo-idea is my new favourite term.  Gongo–  stands for Government-Organized Non-Governmental Organization. Used by undemocratic governments…