There goes another scare campaign.

Until recently we had very little data about real time changes in ocean pH around the world. Finally autonomous sensors placed in a variety of ecosystems “from tropical to polar, open-ocean to coastal, kelp forest to coral reef” give us the information we needed.

It turns out that far from being a stable pH, spots all over the world are constantly changing. One spot in the ocean varied by an astonishing 1.4 pH units regularly. All our human emissions are projected by models to change the world’s oceans by about 0.3 pH units over the next 90 years, and that’s referred to as “catastrophic”, yet we now know that fish and some calcifying critters adapt naturally to changes far larger than that every year, sometimes in just a month, and in extreme cases, in just a day.

Data was collected by 15 individual SeaFET sensors in seven types of marine habitats.  Four sites were fairly stable (1, which includes the open ocean, and also sites 2,3,4) but most of the rest were highly variable (esp site 15 near Italy and 14 near Mexico) . On a monthly scale the pH varies by 0.024 to 1.430 pH units. 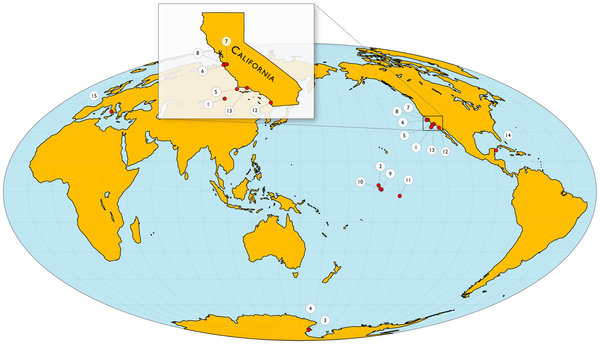 See Table 1 for details of locations

The authors draw two conclusions: (1) most non-open ocean sites vary a lot, and (2) and some spots vary so much they reach the “extreme” pH’s forecast for the doomsday future scenarios on a daily (a daily!) basis.

At Puerto Morelos (in Mexico’s easternmost state, on the Yucatán Peninsula) the pH varied as much as 0.3 units per hour due to groundwater springs. Each day the pH bottomed at about 10am, and peaked shortly after sunset. These extreme sites tell us that some marine life can cope with larger, faster swings than the apocalyptic predictions suggest, though of course, no one is suggesting that the entire global ocean would be happy with similar extreme swings.

Even the more stable and vast open ocean is not a fixed pH all year round. Hofmann writes that “Open-water areas (in the Southern Ocean) experience a strong seasonal shift in seawater pH (~0.3–0.5 units) between austral summer and winter.”

This paper is such a game changer, they talk about rewriting the null hypothesis:

“This natural variability has prompted the suggestion that “an appropriate null hypothesis may be, until evidence is obtained to the contrary, that major biogeochemical processes in the oceans other than calcification will not be fundamentally different under future higher CO2/lower pH conditions””

Matt Ridley: Taking Fears Of Acid Oceans With A Grain of Salt

The central concern is that lower pH will make it harder for corals, clams and other “calcifier” creatures to make calcium carbonate skeletons and shells. Yet this concern also may be overstated. Off Papua New Guinea and the Italian island of Ischia, where natural carbon-dioxide bubbles from volcanic vents make the sea less alkaline, and off the Yucatan, where underwater springs make seawater actually acidic, studies have shown that at least some kinds of calcifiers still thrive—at least as far down as pH 7.8.

In a recent experiment in the Mediterranean, reported in Nature Climate Change, corals and mollusks were transplanted to lower pH sites, where they proved “able to calcify and grow at even faster than normal rates when exposed to the high [carbon-dioxide] levels projected for the next 300 years.” In any case, freshwater mussels thrive in Scottish rivers, where the pH is as low as five.

Human beings have indeed placed marine ecosystems under terrible pressure, but the chief culprits are overfishing and pollution. By comparison, a very slow reduction in the alkalinity of the oceans, well within the range of natural variation, is a modest threat, and it certainly does not merit apocalyptic headlines.

We also know that adding CO2 in a sense is feeding the calcifying organisms (like it feeds life above the water too). Co2 dissolves as bicarbonate, which marine uses to make skeletons and shells from. So yes, a lower pH dissolves shells, but the extra CO2 increases shell formation.

Figure 2. pH dynamics at 15 locations worldwide in 0–15 m water depth. All panels are plotted on the same vertical range of pH (total hydrogen ion scale). The ordinate axis was arbitrarily selected to encompass a 30-day period during each sensor deployment representative of each site during the deployment season. See Table 1 for details regarding sensor deployment. 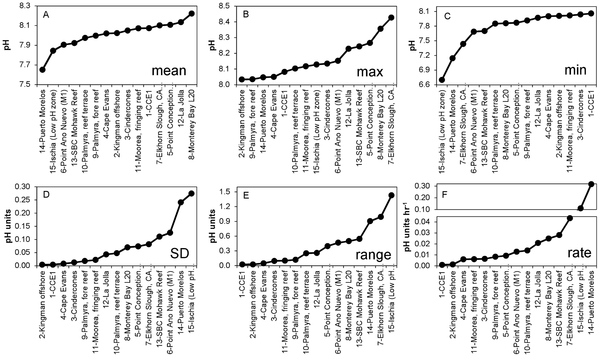 There are caveats: possibly marine life is already operating at the “edge of it’s tolerances” (we don’t know), so pushing things further may be still detrimental. Also these extreme environments don’t have the same variety of organisms that less extreme ones do, so we don’t really want to convert the whole equatorial ocean into life as it exists in one Mexican Bay. But conditions in some places are changing more on daily basis than we are being warned to fear from a century long trend.

The bottom line is that claims that these pH changes are unprecedented, fast or unnatural are overstating things dramatically.  Typical estuarine environments have an inflow from rivers (with a lower pH) that fluctuates wildly, so do areas with upwelling, and even the pH in kelp forests varies dynamically.

The alarmist headlines, fears of mass starvation, and satanic allusions are unjustified:

What we don’t know vastly eclipses what we do. We need to study the effects of human emissions of CO2, but not at the expense of other far more pressing threats.

If we care about ocean-life (not to mention our food supply) we need to focus on things that threaten it now.

Hat tip Brice Bosnich (who wrote the post: The chemistry of ocean pH and “acidification”).

Other information on the topic from  my site:

1103 studies show that a slight lowering of pH promotes growth in marine life.

From the SPPI site:

Quantifying the Effects of Ocean Acidification on Marine Organisms

Answers to a Fisherman’s Testimony about Ocean Acidification