If National Geographic had more stories like this one, I’d be inclined to subscribe. This is fascinating stuff.

Seven thousand years before Stonehenge was Göbekli Tepe in southern Turkey, where you’ll find ring upon ring of T-shaped stone towers arranged  in a circle. Around 11,600 B.C. hundreds of people gathered on this mound, year after year, possibly for centuries.

There are plenty of mysteries on this hill.  Some of the rocks weigh 16 tons, but archaeologists can find no homes, no hearths, no water source, and no sign of a town or village to support the hundreds of workers who built the rings of towers. The people apparently, unthinkably really, were nomadic, as far as we know, they had no wheels, and no beasts of burden. True hunter gatherers, whose first heavy building project was not a home to fend off the elements, but a religious sacred site.

Perhaps we should not be so surprised, after all, we know the pyramids, the largest and oldest surviving buildings didn’t house people or grain either —  the only humans they keep warm were dead ones. In a sense, the theme repeats. It takes extraordinary expertise and effort to move tons of rock, especially if you don’t have a trolley, let alone a crane, yet seemingly the first priority for our ancestors was not food or shelter, but just some respite from daily overbearing fears. Could it be some other reason than fear like the “spectacle” or festival (mentioned in the article) or the ever reliable search for status? Maybe, but it’s hard to believe these circles could be about power trips or parties if the there is no permanent settlement to reward the hierarchy.

Hat tip to GWPF which linked to the story: “All You Know About The ‘Neolithic Revolution’ May Be Wrong” 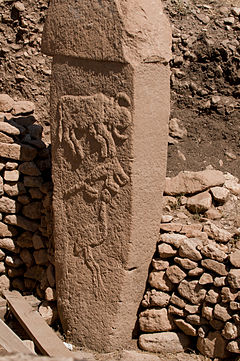 The Birth of Religion at National Geographic.

Here are a few selected paragraphs:

Göbekli Tepe was built much earlier [than Stonehenge] and is made not from roughly hewn blocks but from cleanly carved limestone pillars splashed with bas-reliefs of animals—a cavalcade of gazelles, snakes, foxes, scorpions, and ferocious wild boars. The assemblage was built some 11,600 years ago, seven millennia before the Great Pyramid of Giza. It contains the oldest known temple. Indeed, Göbekli Tepe is the oldest known example of monumental architecture—the first structure human beings put together that was bigger and more complicated than a hut. When these pillars were erected, so far as we know, nothing of comparable scale existed in the world.

“Within minutes of getting there,” Schmidt says, he realized that he was looking at a place where scores or even hundreds of people had worked in millennia past. The limestone slabs were not Byzantine graves but something much older.

Inches below the surface the team struck an elaborately fashioned stone. Then another, and another—a ring of standing pillars. As the months and years went by, Schmidt’s team, a shifting crew of German and Turkish graduate students and 50 or more local villagers, found a second circle of stones, then a third, and then more. Geomagnetic surveys in 2003 revealed at least 20 rings piled together, higgledy-piggledy, under the earth.

Puzzle piled upon puzzle as the excavation continued. For reasons yet unknown, the rings at Göbekli Tepe seem to have regularly lost their power, or at least their charm. Every few decades people buried the pillars and put up new stones—a second, smaller ring, inside the first. Sometimes, later, they installed a third. Then the whole assemblage would be filled in with debris, and an entirely new circle created nearby. The site may have been built, filled in, and built again for centuries.

“These people were foragers,” Schmidt says, people who gathered plants and hunted wild animals. “Our picture of foragers was always just small, mobile groups, a few dozen people. They cannot make big permanent structures, we thought, because they must move around to follow the resources. They can’t maintain a separate class of priests and craft workers, because they can’t carry around all the extra supplies to feed them. Then here is Göbekli Tepe, and they obviously did that.” 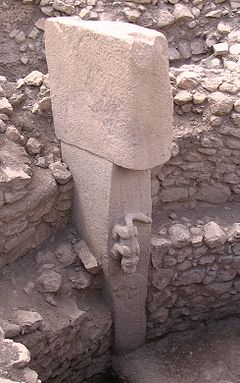 Discovering that hunter-gatherers had constructed Göbekli Tepe was like finding that someone had built a 747 in a basement with an X-Acto knife. “I, my colleagues, we all thought, What? How?” Schmidt said. Paradoxically, Göbekli Tepe appeared to be both a harbinger of the civilized world that was to come and the last, greatest emblem of a nomadic past that was already disappearing. The accomplishment was astonishing, but it was hard to understand how it had been done or what it meant. “In 10 or 15 years,” Schmidt predicts, “Göbekli Tepe will be more famous than Stonehenge. And for good reason.”

I can’t say I’m totally convinced of the whole these, perhaps the wooden huts blew away or are buried under the hill next-door. But certainly the old neat theory is dead. It was thought that the Neolithic revolution began with farming. To manage the farms, people needed permanent housing. To manage the stores of grain, they needed a stable society. But some settlements have been discovered from as far back as 13,000 B.C. (around where Palestinians, Lebanese, and Israelis reside). So another theory suggests villages came first, then farming and religion.

Göbekli Tepe, to Schmidt’s way of thinking, suggests a reversal of that scenario: The construction of a massive temple by a group of foragers is evidence that organized religion could have come before the rise of agriculture and other aspects of civilization. It suggests that the human impulse to gather for sacred rituals arose as humans shifted from seeing themselves as part of the natural world to seeking mastery over it.

I’m not too sold on theories of humans “shifting” to seek mastery and what not either (what human didn’t want mastery over cold, hunger and disease?) So I think the motivating force is straight out fear. The sentient empathetic intelligent soul needs a salve for all the pain that would have been a regular part of Paleolithic life.

Was Göbekli Tepe the cradle of civilization?

Today the closest known wild ancestors of modern einkorn wheat are found on the slopes of Karaca Dağ, a mountain just 60 miles northeast of Göbekli Tepe. In other words, the turn to agriculture celebrated by V. Gordon Childe may have been the result of a need that runs deep in the human psyche, a hunger that still moves people today to travel the globe in search of awe-inspiring sights.

It’s worth a look (these photos here are not from Nat Geographic).

Read the whole story:  The Birth of Religion at National Geographic.

2. Erkcan: The sculpture of an animal at Gobekli Tepe, close to Sanliurfa.