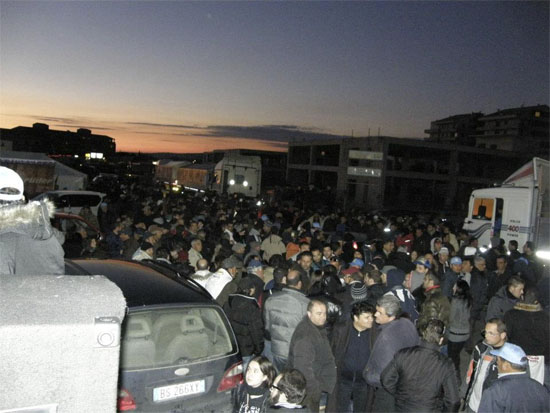 During the last couple of weeks, truck-drivers in an advanced western region with 5 million people have blockaded roads and ports protesting at the sudden 40% rise in the fuel price (due to taxes) which is wiping out their business. The fishermen joined in, so did farmers. The area is heavily dependent on road transport, and was apparently paralyzed for days with fuel shortages, and empty supermarket shelves. On the internet, people are describing this as a middle class uprising, and on the verge of revolt. Can you name the location?

…shades of a magna-carta type moment

Possibly not. The mainstream media are not describing this uprising at all … it’s o’ so unnewsworthy. And you can imagine that readers might not care if this were taking place in the back-reaches of Venezuela, the slums of Chad, or the dark corner of Uzbekistan. But it wasn’t. It’s was in the West, in Sicily. Who knew?

Word on the internet is that the middle class producers are rising up en masse. It’s  known as the ‘Movimento dei Forconi’ or ‘Pitchfork Movement’. Just like the The Convoy of No Confidence in Australia last August, it started with truck-drivers and farmers, and just like the Convoy, the media ignored it. Ultimately, the journalists are not on the same side as the working middle class.

There are shades of a magna-carta type moment.

These are some of their demands:

After a hundred and fifty years the south is still suffering the effects of this occupation, but now the roles have been reversed; the wealth of the north is confiscated by Rome to bribe subsidise the corrupt politicians of the south. This is one of the reasons why Lega Nord is so popular in the North.

It will be interesting to see what happens next, as the protests are soon moving to Rome. This is not necessarily a positive move, as every political movement (eg. Lega Nord) that has gone onto Rome, has been bought off and betrayed their ideals. Over the past week, the establishment, including the unions have been deeply humiliated and lost a lot of credibility. There has been very little media coverage; the news still has to breach the international mainstream media (MSM) ‘Firewall’.

As Italy falls deeper into depression, the establishment will lose further credibility; regional movements such as the Forconi will multiply, putting further pressure on the State. This could well be the beginning of the end for the Italian state as Darth Monti’s taxes push more people unto the street.

Not surprisingly there are attempts to smear the movement, with baseless speculation that it is “linked” to the mafia, though there is no investigation underway, or evidence to speak of. Police confirm the “rumors” err… are real rumors, as if that is something the police ought to do.

(What happened to innocent until proven…?). See here:

Many people believe that fascists and mafia are behind and within the movement. There are those who ask the promoters of the protest to distance themselves from people linked to the crime who are seizing the moment to join the protest as victims to have a sort of control. Prosecutors in Palermo confirmed the possibility of such suspicious, but it is unknown whether there are already ongoing investigations. [Source]

What does it mean to confirm the possibility of a suspicion? Would that be nothing… or is it less?

Put on your thinking cap and try to imagine the Mafia putting “the arrest of corrupt politicians” at the top of their Christmas Wish List? As if.

A blogger near Vernazza writes about the protests with UPDATES.

UPDATE: One of the reasons Italy is in such a deep hole is its media

James Panichi, Italian writer, in The Australian writes about how the captain of the Costa Concordia was “presumed guilty” by the journalists from day one.

I would argue the Italian press is among the most unreliable and unprofessional in the West.

What few outsiders understand is that Italian journalism is dominated by a legally recognised corporation, the Ordine dei giornalisti. It’s a throwback to the fascist era guild of journalists, under which people who had not passed a state-run exam could not be employed as fully fledged journalists. Similar laws are in place today. The Ordine is by definition uncompetitive: it’s designed to curb the supply of journalists, thus protecting the state-sponsored perks they have come to expect (free gallery entry, discounted public transport, inflated pay).

And, like most of the medieval guilds that dominate and distort Italy’s economy, the Ordine is highly politicised and incapable of upholding professional standards. There may be exceptions, but the copy of most Italian journalists would not get past the most forgiving of subeditors in an English-speaking newsroom.

Italian journalism is unreliable, slanderous and sensationalist. There is no presumption of innocence: anyone accused of a crime is described as having done it. People are identified by their ethnicity; wrong articles are never corrected; names are misspelt. Prominent Italians have opinions attributed to them that they neither hold nor understand. The style of writing is opaque and wordy. There are virtually no women columnists working at the country’s top 20 newspapers. There’s also the tradition that has become synonymous with Italian reporting: virgolettare il pensiero, the quoting of a person’s thoughts: “I’m in a very tricky situation,” the prime minister thought.

The two largest mastheads, Corriere della Sera and La Repubblica, struggle to sell more than 600,000 copies a day – a pittance for a country of 60 million people. But market forces aren’t really the issue. The Italian government spends about $850 million a year to prop up newspapers. Some publications exist not to make money, but to generate employment through government funding.

It’s a symptom of a weak press, of low standards, of an industry that was  too conflicted to provide checks and balances for the government expenditure, and never strong enough to expose corruption. A nation without a real investigative media will collapse under it’s own cronyism. And so it has come to pass…