Following on from blackbody discussions, here is Christopher Monckton’s simple account of how we know the IPCC is exaggerating climate sensitivity. This comes from page 12 of Moncktons: Regulation without reason  (on the Canadian coal regulations.) 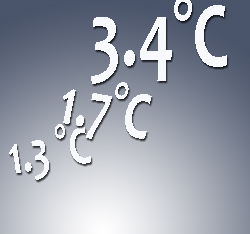 IPCC (2007, scenario A2) expects 3.4 C° manmade global warming to 2100. The calculations so far in this paper have assumed that the IPCC is right. Environment Canada does not ask any questions about the IPCC’s global-warming projections. Officials should have made some allowance for IPCC overshoot.

Since 1850, the year when the first global-temperature record was kept, the most rapid rate of warming sustained for more than a decade was 0.17 C°/decade (HadCRUt3, 2011). Assume that, after no warming in the 2000s, this maximum supra-decadal warming rate were to become the average rate for the next nine decades. Warming would be 1.5 C° by 2100, 44% of IPCC’s central estimate.

Averaging the results obtained from data over three recent periods by distinct methods gives 1.3 to 1.7 C° warming by 2100 – 40 to 50% of the IPCC’s estimate.

Disclaimer: Views expressed in a guest post are those of the author.