Australian people know they are being “sold” a message in the media. According to the Australian Election Study from 2010, just 17% are “confident” in The Press. [Story: The Australian]

Australians were underwhelmed with the politics on offer in 2010,  Rudd hit deep lows, Gillard had knifed Rudd, yet, even in that unflattering environment over twice as many people (43%) said they were confident in “the federal government ” as said the same about the media. I wonder what these results would be now?

Trust in the media is a theme I will keep returning to in 2012  – when it comes to underperforming politicians, insane laws, over-reaching judiciary, corrupt bureaucrats, and failing currencies, the problem is The Media. None of the lackluster or self-serving talent on display would be able to continue for long if the media exposed them and relentlessly demanded logic, reason, evidence and manners.

It’s what is not said that matters. 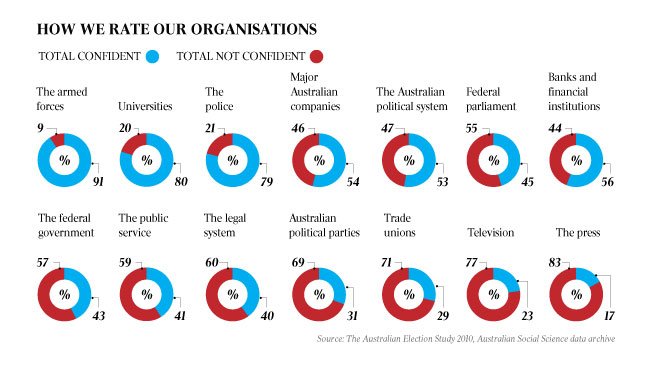 Australians trust the armed forces, universities, and the police.

The gloss of universities is striking — they are riding on the rigor and achievements of past generations.

The last survey I saw (about May 2011) showed that 50% of Australians still think we need to do something about “the climate”, so none of those people have even the faintest idea of how some parts of our universities are not that different to the Press Corp — just wait til the sordid details of Climategate, lost data, and hidden files surface and the people find out how impartial and trustworthy those universities have been.

Even though voters don’t trust the media, in Australia, the MSM is still very influential. When election time comes, only 10% of the voters followed it through the internet. It’s rising fast, but fully 56% of people followed the election through their television or newspaper. We have five real channels (with many spinoff channel variants of late) and two of the five are government funded in part or in full. There is no Fox News in Australia.

Assuming that the internet remains largely free, that MSM influence can only fall, but why assume that free speech will stay free? The government censors are becoming ever more blatant – yesterday ruling that the media are not allowed to photograph asylum seekers arriving in boats.

Some time ago, before the collapse of the Soviet Union, dissident Czech novelist Zdener Urbanek observed: “In dictatorships we are more fortunate that you in the West in one respect. We believe nothing of what we read in the newspapers and nothing of what we watch on television, because we know it’s propaganda and lies. Unlike you in the West, we’ve learned to look behind the propaganda and to read between the lines, and unlike you, we know that the real truth is always subversive”.

What he might have said, though, is that the whole truth is subversive. I am more and more convinced that the primary means by which the agenda is shaped is by leaving so much unsaid. News is only news – in the opinion of the MSM – when the MSM says it is. The rest, by inference, shall be ignored – and it is that which distorts our perception of the world.

The second graph comes from the same organisation and a related study (see below). I can’t find the results the Australian reported  in the Australian Election Study site. The Australian lists them as “unpublished”. The timing of this news story is slightly curious. It’s a front page item in The dead news week.