Have you wondered what the global raw rural data tells us?

What did those thermometers say before the adjustments, smoothing, selection, and averaging?

This just might be the first time anyone has publicly compared the global raw data to published adjusted data sets in this way. 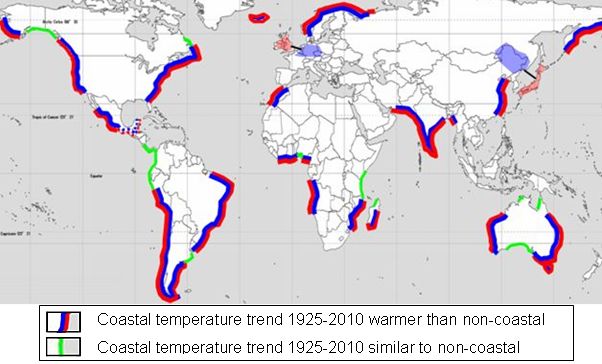 Fig1. Red-Blue lines mark regions where there was a different coastal to inland trend. In green areas the two trends were similar.

What he finds is perhaps not so unusual: The coastal areas are heavily influenced by the sea surface temperature. Inland stations record larger rises and falls in temperature, which is hardly surprising. But, the implications are potentially large. When records from some stations are smoothed over vast distances (as in 1200 km smoothing), results can be heavily skewed by allowing coastal trends to be smoothed across inland areas. What Lansner finds is that coastal trends can be smoothed over the oceans, but that there is little justification for smoothing them over land.

Lansner chose the longest records he could find, and checked the sites via Google mapping to avoid the UHI (Urban Heat Island Effect) as best he could. This will always be a challenge. But, the stand-out message from all over the world is in some ways also the bleeding, but unspoken, obvious: Our land masses heat up and cool down faster than the deep expanse of the oceans.

The coastal slice of the world is thin, so it’s small in terms of its land area, yet its influence over the “Global Land Averages” may be far larger than it ought.

Tantalizingly, Lansner also seems able to explain the mysterious post 1960 temperature “decline” in tree rings that was famously hidden from global graphs. Mann et al removed the tree ring record after 1960, saying it didn’t match thermometer recordings, but since most trees grow inland, rather than on coasts (or in the ocean), the trees turned out to be matching the inland trends, not the sea-surface trend. Global inland temperatures were cooling fast by 1960, and the temperatures implied by the tree rings followed the inland raw data.

Yes, there are all the usual caveats: This is one man’s, non-peer reviewed work; it hasn’t been replicated, and some adjustments help us to get a better result, so an unadjusted series has it’s own problems. But, I’m posting the key parts here for discussion, and you will have to visit Frank’s site to appreciate the phenomenal amount of work that has gone into this.

The strange thing is that this kind of detailed research is being done by an unpaid scientist working from home. Lansner feels the coastal versus non-coastal trend is so obvious that many scientists must be aware of it, yet don’t seem to have published on it, and don’t appear to criticize publications that combine the different trends in ways that don’t reflect their relative surface area of  the globe.

The figure numbers on graphs refer to Frank’s original post, where he has over thirty graphs.

Fig1. Red-Blue lines mark regions where there was a different coastal to inland trend. In green areas the two trends were similar.

It is clear that coastal trends (red) are quite different from the more volatile inland trends. Data used in this writing, as in all RUTI writings, are from unadjusted GHCN. 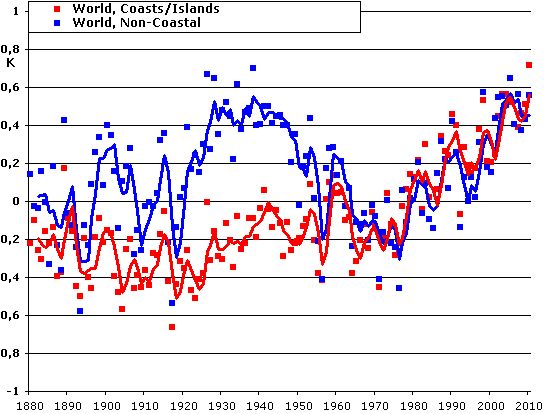 Fig 2. The blue line is the inland regional trends vs the red line marking the coastal surface station trends.

The land and ocean graphs match the Raobcore weather balloon data when it was available from 1959 onwards. 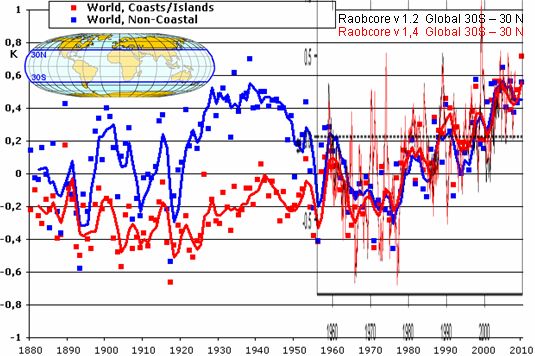 Fig2a. Comparison with Raobcore (30S-30N) tlt. Representing half the globe, and around 2 thirds of the area where it was possible to make the 35 study cases. Both land (non-coastal) and ocean (coastal) trends from this writing appears to produce results rather similar to Raobcore data 1958-2008. 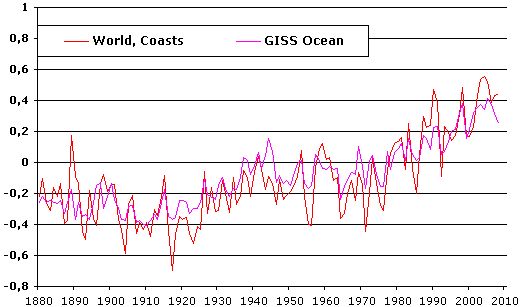 Could we have expected this match? To some degree, yes, because thirty-five ocean chunks spread out rather randomly over the world are likely to give a fair match to global MAT and SST.

So for the coastal and island Unadjusted GHCN stations, it seems that data to some degree are being verified.

The consequences are broad: 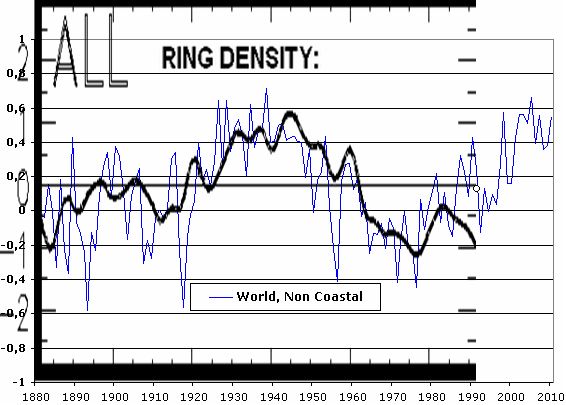 I think we can conclude that trees grow on land, or is this taking it too far? (CRU´s other parameter for tree proxies, ring width, has a fair match, also.)

The inland trends also match the retreat of glaciers, and the Greenland ice-melt data. Global sea levels rise and fall with some delay between 1930 and 1970, but then (oddly) rise in concert with the inland temperatures. 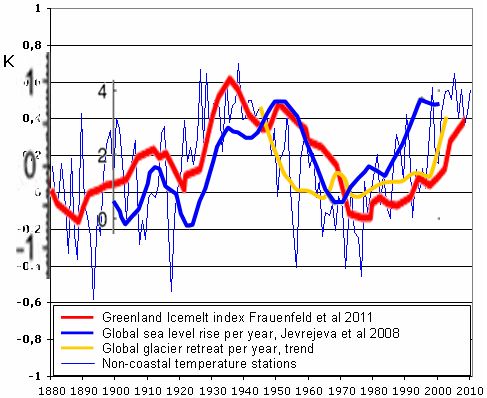 Fig 4a: Fig 4a. – A handful more trends related to temperature.

The mystery of the recent warming.

In the raw data, the inland temperatures rise at a similar trend to the coastal temperatures. Yet, in the GISS graph that disappeared, there is a divergence. There are several possibilities.

1. The raw data for coastal cities is contaminated and warm-biased.

2. The inland raw data is too cool-biased.

3. Oceans are warming as fast as land masses. 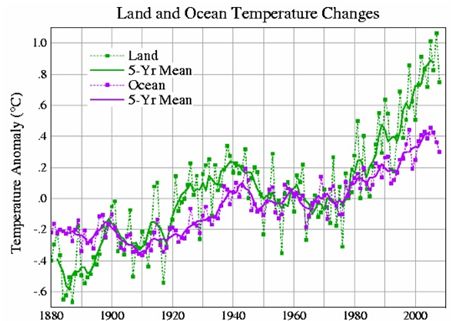 There are odd differences comparing the non-coastal trends with the GISS records since 1930.

To see exactly how much larger the warming trend was in GISS land readings compared to my unadjusted GHCN non-coastal readings, I took the difference year by year. The graph below shows that from around 1925 till today, the GISS land product has a whopping 0.8 K increase in warming over that of the unadjusted GHCN non-coastal thirty-five chunks of land spread over the globe. 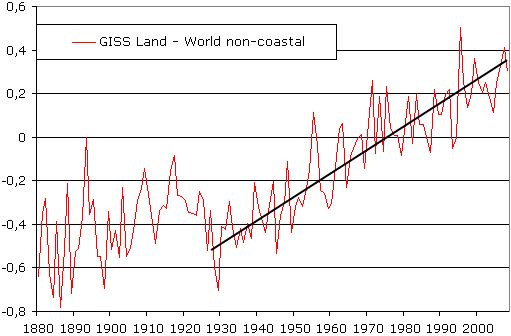 Fig 6: The “GISS land” has more than 0,8 K more heat trend than the GHCN Unadjusted non-coastal stations after 1925, and it happens to follow a near straight line.

The primary point of this report is to show that coastal trends are often different from  non-coastal trends, and to indicate the main trend differences. The comparisons with GISS data, proxies, and others are preliminary work done to provide some comparisons with other temperature trends. I feel it is perhaps too early to conclude much on the GISS comparison, but it is important to raise awareness of the nature of the differences.

There are many factors influencing both land and sea temperatures. I’ve graphed solar cycles and PDO/AMO cycles with the coastal/non-coastal temperatures to see whether any patterns appear. 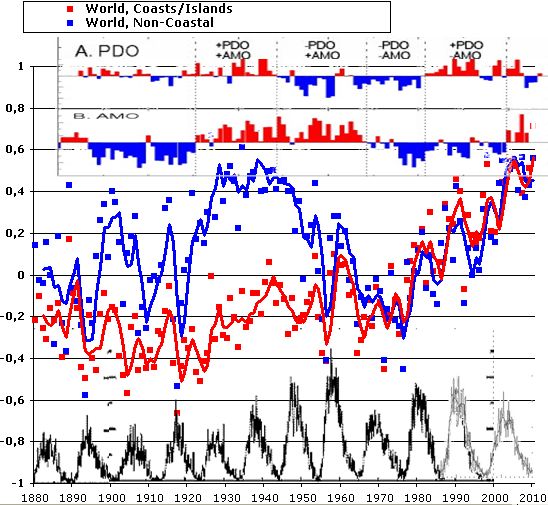 Fig 8 Sketch: Some natural effects on temperatures of the Earth. Graph of sunspot numbers is shown in grey, and may appear to show some compliance with the ocean (coastal) temperature trends over longer periods, that is: Large sunspot cycles seem to make ocean (coastal) temperature trends warm faster, although the PDO appears important for ocean temperatures. Especially the PDO/AMO seems to show fair compliance with the land (non-coastal) trends.(Pacific Decadal Oscillation = PDO    and   Atlantic Multidacadial Oscillation = AMO)

The only period where both PDO is positive and sunspot numbers are large is 1978-2005. Here, both coastal and non-coastal temperatures rise fast.

Marine air can influence land temperatures farther away from the ocean

I have color-coded surface station siting according to four different zones. Both the red (coastal) and brown (high altitude areas facing onshore air movements) zones appear to be influenced by sea surface temperatures.

Some areas do not show differing trends in coastal and island stations and non-coastal stations. Mostly, this has been observed close to the equator and on coasts in bays oriented east-west. Around the equator, winds are generally weak. The trends around the equator are also fast-changing due to the ENSO pattern that has a good match with land trends. Possibly, coasts running east-west may be less exposed to prevailing winds.

I have used thirty-five study cases, and will start by illustrating examples from the USA, where many long temperature series are available and the mechanisms employed very easily detectable (the usefulness of my approach can best be confirmed or disproved  using high quality data as available for the USA). I give just one example here, but there are others on my site.

Fig 14: NE USA. In several cases the red coastal area also includes islands. In general for all categories it is best to avoid temperature stations with too much risk of UHI. For practically all stations near towns I have checked position on Google Maps to verify a rural or near rural location. (Yes, that was a lot of work..). If for example a coastal station not that far from a city shows a significantly different trend than the island rural station it will not be used. This I did to make sure that the warmer trend in for many coastal areas is not a UHI phenomenon.

The temperature of the bulk of the area is found in the inland, non-coastal areas, and areas not facing marine air. These trends are shown by the blue line below. The coastal trend (red) is “warmer.”

What is surprising is that the Hadcrut compilations show a trend rising so much faster than the rural unadjusted inland temperatures. Has Hadcrut chosen only coastal or urban stations to represent this larger land mass?

How can anyone honestly attempting to do science for this NE USA region choose two Boston stations, one for the City of Syracuse, one for the City of New York, and then a warm-trended coastal island station, to represent the bulk of the area? If the professional scientists working with Hadcrut have not noticed the huge differences between coastal and non-coastal temperatures, why are four of the five selected stations urban? 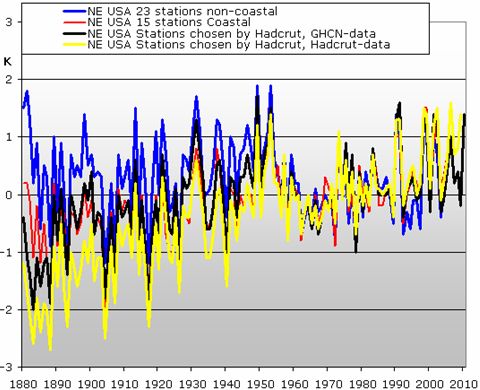 The strange case of missing data

Now, I want to show a situation where data was really hard to get my hands on.

One might think this was Zambia or something, but, no, temperature data is hard to get in Central Europe and the UK. We might also want to analyze the British Islands themselves for coastal versus non-coastal trends, but there is a problem doing so: 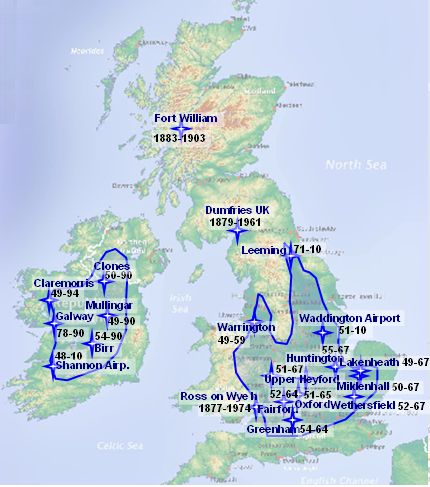 Fig 30 I sketched the areas (blue areas) I find best for finding non-coastal stations. There where a good number of stations, but not one single stations (Except for Birmingham, London areas etc) enables a compare of the early warm years 1930-50 with the recent warm peak 1990-2010. Within the blue areas, not one single station has data before 1948, and we remember that the largest differences between coastal and non-coastal generally is 1920-45.

If the people of Ireland and the UK demanded the full original data from these temperature stations, the results could be interesting. Remember, they have paid for these data with their taxes, as have the people of Spain, France, Belgium, Holland, Germany, Denmark, and especially POLAND.

Supposedly,  the Irish could not collect temperatures properly before 1950, and the British could only collect them very poorly before 1950 and after 1975.  However, many nations had no problems. For example, Pakistan,  Bangladesh, Zambia, Zimbabwe, Paraguay, Mexico, Sudan, Japan, etc. have plenty of complete temperature series going back to 1900-1920.  Yet, West Europeans failed to produce quality temperature data?