In Brief: The oceans are not acidic, and will not become acidic in the foreseeable future. Many of the fears and alarming scenarios are based on models. Many scary headlines are based on studies of extreme pH values beyond the range of anything realistic.

Incredibly, hundreds of studies show that for pH changes that we are likely to encounter in the next 100 years, there is arguably a net benefit to underwater life if the oceans became a little less alkaline.

Studies of how marine life copes with less alkaline conditions include many experiments with water at pH values in a range beyond anything that is likely on planet Earth — they go beyond the bounds of what’s possible. There are estimates that the pH of the ocean has shifted about 0.1 pH unit in the last 200 years, yet some studies consider the effects of water that is shifted by 2 or even 4 entire pH units. Four pH units means 10,000 fold change in the concentration of hydrogen ions). That’s a shift so large, it’s not going to occur in the next few thousand years, even under the worst of the worst case scenarios by the most sadistic models. Indeed, it’s virtually impossible for CO2 levels to rise high enough to effect that kind of change, even if we burned every last fossil, every tree, plant microbe, and vaporized life on earth. (Yet still someone thought it was worth studying what would happen if, hypothetically, that happened. Hmm.)

1103 studies on acidification say there’s no need to panic

CO2 science has an extraordinary data base of 1103 studies of the effects of “acidification” on marine life. They reason that any change beyond 0.5 pH units is “far far beyond the realms of reality” even if you are concerned about coral reefs in the year 2300 (see Tans 2009). Even the IPCC’s  highest end “scenario A2” estimate predicts a peak change in the range of 0.6 units by 2300.

Many of the headlines forecasting “Death to Reefs” come from studies of ocean water at extreme pH’s that will never occur globally, and that are beyond even what the IPCC is forecasting. Some headlines come from studies of hydrothermal vents where CO2 bubbles up from the ocean floor. Not surprisingly they find changes to marine life near the vents, but then, the pH of these areas ranges right down to 2.8. They are an extreme environment, nothing like what we might expect to convert the worlds oceans too.

Marine life, quite happy about a bit more CO2?

Studies of growth, calcification, metabolism, fertility and survival show that, actually, if things were a little less alkaline, on average, marine life would benefit.  There will be winners and losers, but on the whole, using those five measures of health, the reefs are more likely to have more life on and around them, than they are to shrink. 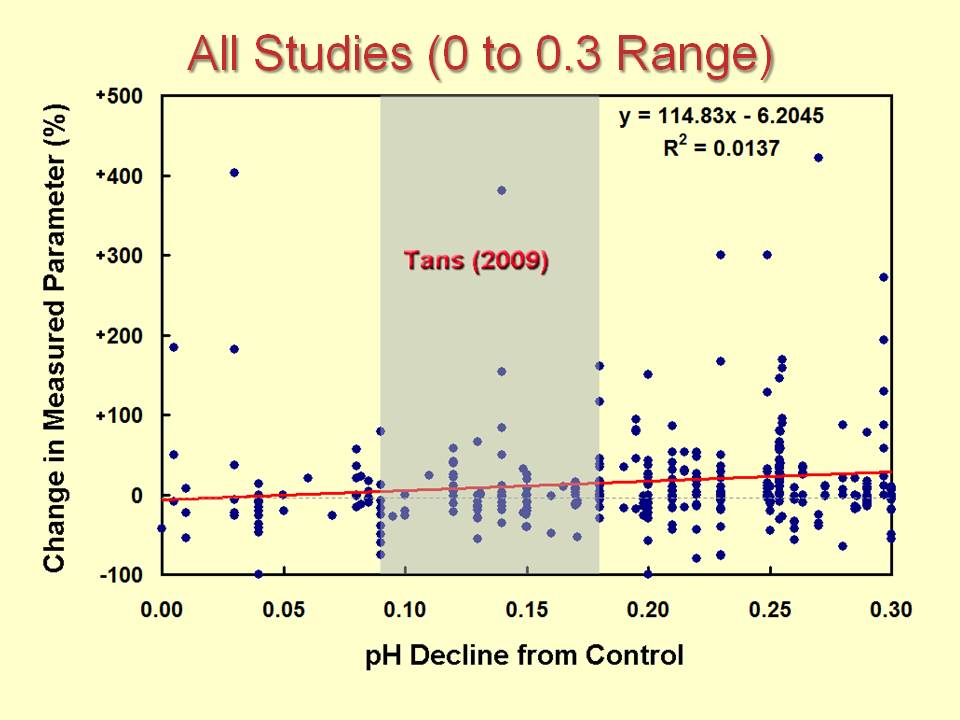 Figure 12. Percent change in the five measured life characteristics (calcification, metabolism, growth, fertility and survival) vs. decline of seawater pH from its present (control treatment) value to ending values extending up to the beginning pH value of "the warped world of the IPCC" for all individual data points falling within this pH decline range.

How can this be?

First, marine life evolved under conditions were most of the time the world was warmer and had more CO2 in the atmosphere than it does today. Second, like life above the water, life-below-water is based on carbon, and putting more carbon  into the water is not necessarily a bad thing. That said, the dots in the graph above represent study results, and the ones below zero tell us there will be some losers, even though there will be more winners (above zer0).  Thirdly, watch out for some of the more devastating headlines which also come from studies where researchers changed the pH by tossing hydrochloric acid into the tank. Chlorine, as they say, is not the same as the gas nature breathes — CO2. (The strange thing about the studies with hydrochloric acid, is that it doesn’t seem to be bad as we might have expected– nonetheless, it seems like a dubious practice to use in studying the health of corals.)

The Ocean Acidification Database is housed at CO2 science.

The graph above is just one of many on their results and conclusions page.

Yes, we should watch and monitor the oceans careful. No, there is no chance the Great Barrier Reef will be gone in the next 100 years: 1103 studies show that if the worlds oceans were slightly less basic then marine life as a whole will be slightly more likely to grow, survive, and be fertile.

That doesn’t mean we should torch coal seams for the fun of it, but it does mean we can afford to hold off on the oceanic panic for a century or so while we figure out how to make solar and wind power work ( in the event that we might need them, and in the event that they might “work”).

The Science and Public Policy Institute has a PDF summary of the results and conclusions.

Tans, P. 2009. An accounting of the observed increase in oceanic and atmospheric CO2 and an outlook for the future. Oceanography 22: 26-35.