There’s not much point in me posting scientific information at the moment. Let’s face it, the political situation Down-under has reached new peaks of grand maladroitness and irascible incompetence, and most of the comments will want to unpack that. 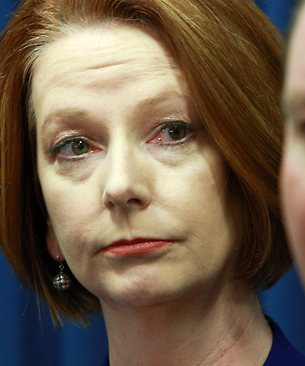 Bolt is forecasting that Gillard will be gone by the end of September. Today 500 people protested outside Albanese’s office, incensed that he called the Convoy inconsequential. (He created a lot of enemies with that one comment.)

For those of you overseas, sorry if it’s all so Australian-politics dominated, but really, there haven’t been that many democratic governments who have bollocksed up so many things, for so many people, in so short a time. This is history in the making. The cattle trade, insulation installers, building groups, asylum seekers (shutting down a working system, announcing East Timor , then Malaysia), Green loans, and cash for clunkers. And now of course, just in case there is a single business group left undamaged, they want to tax-the-rest to change the weather.

When the Rudd government took over in 2007 there was a chunky$20 billion dollar surplus, now there is $82 billion in debt and $200 billion in liabilities (see also $200 b in securities on offer); there were 150 asylum seekers in detention in 2007 (or something like that) now there are 6,000. They had a landslide type win getting in, then the thinnest marginal “win” with the aid of lies, and  now they’re reduced to the lowest polling figures ever recorded. All in just three years and nine months. Impressive.

It’s an interesting case-study in just how much damage a modern democratic party can do.

A local Liberal Party branch president recently confided to me. When he asked his long term Laborite friend if Gillard was as bad as Whitlam, the Labor friend indignantly exclaimed they weren’t in the same class, and then he defended Whitlam.

I know you non-Australians are all proud of your Worst Ever Governments, and some of them have been doozies. But go on, try to think of ways as to how this government could have botched up more things in a lesser span of time.

In 2007, Kevin-07 was given a messiah-like kind of status. People talked about them being in power for a decade. (O’Yes, Obama eclipsed that.)

But the modern Labor Party is so soulless and driven by the primary philosophy that no-backflip-lie-action-or-omission is unthinkable if it comes between them and power. Ask not what she will stand for, but what she won’t stand for.

At what point does she say, I want to be PM, but I won’t do that.

What price is the Gillard Government not willing to pay? At what point does she say, I want to be PM, but I won’t do that.

Would Julia Gillard not protest if thousands of dollars were fraudulently nicked from workers, and demand that the misuse be pursued to the end of the Earth? Well, how about a million? Sure she didn’t know about the embezzlement at the time, but she’s had years to make sure it was pursued and the money, such as it could be, returned to the union.

Would she not object if highly-paid union leaders used union dues to pay for prostitutes (theoretically, hypothetically of course, with the presumption of innocence and all).

The problem with having poorly chosen principles is that sooner or later it catches up with you.

If the Labor Party held as it’s first principle that it wanted to help the people, it could have had the power and used it wisely. But if the first principle is “power over the people”, and at any cost, the crash is inevitable. There’s a world of difference. Character is destiny, as they say.

Ron Paul in the US has a long history of voting only according to his principles. He turned down pork barreling exercises even in his own voting district. He voted against every tax increase there was. You may not agree with everything he says but you know he has principles.

What can Julia Gillard say she has ever done that tested her principles and she took the hard choice? Why didn’t she pursue the Union leaders who wasted workers funds? Anything to do with union leaders holding pre-selection power over ALP members perhaps?