Christopher Monckton had no slides, no graphs, and only part of one hour, and was faced with tough questions from seasoned journalists, 100 stacked seats of activists who hate him, and yet in that time 9% of the people who saw the debate and thought we needed to act on CO2, changed their mind.

This ladies and gentlemen tells you what a thin veneer it all is. We are one good prime time documentary away from a mass exodus from the Act!-now!-or!-Fry! camp. It’s so finely balanced that only a frenetic campaign of denigration, silence and assiduous denial will keep the public from “getting” it.

As far as believers of Global Warming are concerned, it’s absolutely rational to bully, namecall, whip up smear campaigns, and mock the skeptics. When they don’t have any good answers to the basic questions: Where’s the evidence, and Can we change the Weather?  They don’t have any choice.

Please gentlefolk, can we have a moments silence for the impending death of a brilliant ambitious scam that is as we speak, in it’s final moments of glory. 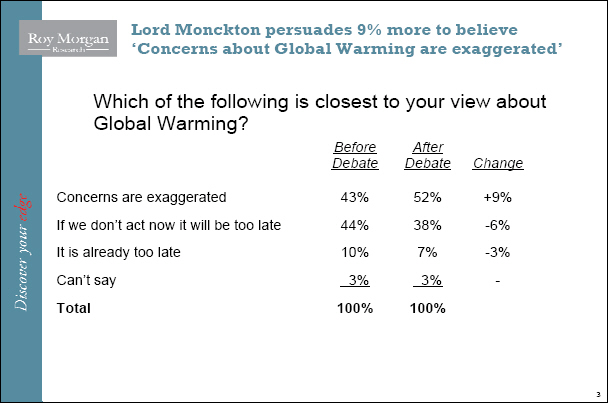 The numbers are falling fast

This special Roy Morgan Reactor survey covered an Australia-wide cross-section of 218 respondents aged 14+. For a closer look at the Reactor and how the different points expressed by Lord Monckton and Dr. Denniss were received by those reacting to the debate, please view the full Reactor highlights here: http://onlinereactor.com.au/PlayerCI.aspx?jid=92&h=crnbqkkkuq%0D%0D

UPDATE: Monckton has just announced a challenge to Malcolm Turnbull – read it here