Gina Rinehart, Australia’s wealthiest business leader opposes the carbon tax and asks “Where are the other leaders?”

What’s unseen are the hundreds of business leaders particularly in the top 100, especially the BCA, who say nothing. The only businesses that want an Australian Carbon Tax are the renewable energy brands and, of course, the companies who won’t have to pay it (i.e. our foreign competitors). Plenty of Chinese, Indian and Brazilian companies would surely give a schadenfreude-smile at seeing their Australian competitors hobbled.

Few Australian business leaders are brave enough to say the bleeding obvious, and I’ve mentioned before that many fear retribution. Gina Rinehart has published an article in Australian Resources and Investment this month (see below) daring them to speak up: where are Australia’s business leaders? 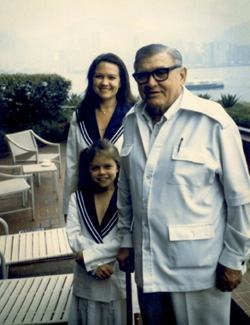 Bianca and Gina Rinehart with Lang Hancock in the 1980's.

Rinehart’s position in Australia is a curious one: in 2011 she is clearly top of  the rich-list, and is the first woman ever to hold that position.  Her father, Lang Hancock, opened the Pilbara but died in 1992 with his estate owing large sums and close to bankruptcy. Rinehart turned those projects around and became the most successful entrepreneur in the country when her wealth tripled to 9 billion dollars in the last year. But far from being the darling of the feminist cohort, nearly twenty years after Hancock died, she is dismissively labeled by many in the mainstream media as a “mining heiress” as if she just got lucky. Do we hear James Packer described as just a “media heir”? Not so. Yet the Sydney Morning Herald improbably told Rinehart that she needs to denounce her late father if they are to believe she’s made it on her own. No one is asking James Packer to speak ill of his dad, and yet the green-feminists don’t seem too concerned about the incongruity. If Packer tops the “richest person in Australia” 20 years after his father died, will anyone be suggesting he didn’t deserve it?

The feminist hierarchy in Australia were thrilled when Julia Gillard was appointed as Australia’s first female PM, and when Quentin Bryce was appointed the first Governor General. Right now, we’ve got the female golden trifecta downunder — PM, GG, and richest person.  But one arm of the trio is summarily dismissed. And while there are many women in politics, there are few at the top end of business — with just 15 women in the top 200. Being a female success, it turns out, is not what matters to a feminist. Their heroes have to hold the “right” opinions too, not think for themselves.   — JN

Reprinted with permission from this month’s Australian Resources and Investment magazine.

Australian business leaders – where are you?

When is the last time you had discussions with a 27-year-old and thought ‘this person should be leading the Business Council of Australia?’

On a wonderful weekend overseas recently, I met one such 27-year-old who graduated from one of the US’s best schools, and then went on to graduate from a leading US business university.  After working in Asia and Europe, he now heads important power generation projects in his own country, recognising that energy security will be one of the key needs of this century.

And what was I told by this young gentleman? That Australia, with its great resources, should also be a country of entrepreneurs, developing our resources for the benefit of our people and its adjacent neighbours.  I was further told that what Australia needs is a reduction in taxation levels, so that better incentives are created for Australians to encourage them to take risks, work hard, plan, persist and strive to do better, and that we should also reduce approvals, permits and license processes.

Yet what is Australia doing? Not only maintaining its taxes, but bringing in two more very messy taxes – MRRT and carbon tax – which will seriously undermine Australia’s competitiveness and increase our costs across the board.  The 27-year-old was perplexed by this!  And that is an understatement.  He spoke more sense over a weekend than we usually hear from our top 100 companies forum, the Business Council of Australia.  Why do we need to hear this from overseas when our own business executives should be making these recommendations?

Some mainstream media like to attack me because I speak out against a carbon tax.  It’s a pity more business executives don’t speak out, because really this proposal should have been dropped long ago.  Let me say how very proud I am of my fellow Australians, who, in recent polls, are voting in the majority against a carbon tax.  We are showing we can think for ourselves, and are not swayed by the global warming fear campaign.

“don’t forget the words of President Hoover, ‘Blessed are the young, for they shall inherit the national debt.’”

Remember when mainstream media was running frightening commentary about carbon-induced global warming?  We read and heard about how the oceans would rise, flooding our homes, and how, over years, we’d all be scorched due to the increasing heat.  Have you noticed that we don’t hear much any more about global warming? The theme has now changed to carbon dioxide-induced ‘climate change’.

Let’s consider climate change – the world has constantly changed climate and will continue to do so. Even before human civilisation, the world went through ice ages and periods of global warming. There will always be changes that effect our climate, even if we close down all thermal coal-fired power stations, steel mills and other manufacturing operations, putting employees out of work and drastically changing our way of life.  Furthermore, there will always be geothermal activity like volcanoes that spew out heat and ash, and this activity does affect the climate.

I am yet to hear  scientific evidence to satisfy me that if the very, very small amount of carbon dioxide in the atmosphere (approximately .038 per cent) was increased, it could lead to significant global warming.  I have never met a geologist or leading scientist who believes that adding more carbon dioxide to the atmosphere will have any significant effect on climate change, especially not from a relatively small country like Australia.  I have however had the benefit of listening to leading scientists and reading information from them.

How would a carbon tax or MRRT on thermal coal (used for most of Australia’s electricity generation) economically impact Australians?  Electricity costs would go up, for a start. Almost every item that you can think of requires electricity at one stage or another in its production, storage or distribution.  It is not just the rich mining companies that would be affected, but every man, woman and child in Australia, not to mention blue collar workers whose jobs in steel mills, power stations and manufacturing facilities  would suffer or disappear.

The sooner we can, as a majority, let our politicians know that Australians are fed up with wasting taxpayers’ money and do not want a carbon tax or MRRT on thermal coal (at least), the better.

Let’s take a quick look at some estimates from third party sources – which our government is not telling us:

If imposed at a rate of $26 per tonne the carbon tax will cost:

And that is just for starters.

And what for? It won’t stop China and India from continuing to emit carbon dioxide on their own account.  These nations understand that you cannot raise a population’s standard of living without also increasing energy consumption.

Let’s quote the Leader of the Opposition, the Hon Tony Abbott, in a March 2011 speech in Perth:

Money is being wasted left and centre on the carbon tax, yours and my money; taxpayers’ money. A grand new unnecessary building in Canberra, endless trips overseas, salaries and other perks for too many on the carbon tax gravy train, and so on, are all at the taxpayer’s expense.

It is not just the rich mining companies that would be affected, but every man, woman and child in Australia, not to mention blue collar workers whose jobs in steel mills, power stations and manufacturing facilities would suffer or disappear.

Do we really want more taxes, so that we can all be ‘compensated’ for our losses due to carbon tax and/or MRRT on thermal coal?  How many bureaucrats would be required for such nonsense?  And who’s going to pay for all the lost jobs? Taxpayers.  Families and industries need to be told that carbon tax and the MRRT (on thermal coal at least) have been abandoned, so that we can all stop worrying about this issue, get on with our productive lives, and stop adding this burden to our increasing national debt.

But to get to this position we must bother to turn up at the ‘No Carbon Tax’ and ‘No MRRT’ rallies, email our politicians, write to our media industry, take part in talk-back radio and support organisations and people with the guts to stand up on these important issues.  We can’t wait any longer for Australia’s business ‘leaders’ to finally stand up on this issue! If we don’t stand up, we run the great risk of seeing the consequences of  such non-action in Australia, and I sincerely hope we don’t.  The sooner the carbon tax and MRRT are gone the sooner we stop wasting time and money on these endeavours, and the easier it will be to raise finance for investment in Australia.

What I would like to see in Australia is steps being taken towards becoming an increasingly prosperous country that we can be proud of, with rising standards of living. We should become a country that the best in the world want to immigrate to, bringing their experience, expertise and funds as well. We must become a country setting aside enough to be able to care for its increasingly elderly population, to look after those who defend our country, and to defend our country against internal crime, war and terrorism.

This country can afford more if it prepares itself now by casting off messy taxes like the MRRT and carbon tax, and slashing time- and money-wasting approvals, permits and licenses to free up resources and enable greater revenue. In addition it is important we do not prevent or delay guest labour from working in hot and remote areas of the country where Australians are often reluctant to work. Guest labour for pre-construction and construction is essential, particularly in remote areas.

“Think of our own children. Let’s not continue to add to Australia’s national debt and burden them, but change our actions and policies now… “

Adequate guest labour on a non-permanent  basis would not only provide needed assistance in Australia, but would also provide necessary assistance to people desperate for work in Asia and India. For those against short term guest labour for preconstruction and construction please consider that if we are able to get industries and infrastructure built utilising guest labour for such construction, we then have those industries and infrastructure in Australia for decades to come and enabling jobs for Australians for the long term.

I would also urge everyone to consider our friends in need who have been devastated by the earthquake and tsunami in Japan. Why not let our friends from Japan work in Australia for a year or two on a temporary guest labour basis?  Japanese people are largely highly-skilled and well-educated, and Australia could offer them temporary homes and work in their time of need. As we sit in warm Australia, we tend to forget how cold it can get in northern Japan, especially for those without electricity or even homes.

Think of our own children. Let’s not continue to add to Australia’s national debt and burden them, but change our actions and policies now to build a more prosperous Australia. Think of the outlook of that very intelligent 27-year-old, and don’t forget the words of President Hoover, ‘Blessed are the young, for they shall inherit the national debt.’

If you are interested in the ideas outlined in this article, please visit ANDEV’s