GetUp have pulled out all stops and produced their most convincing science and economics advert to wow “the nation’s decision makers” (they actually use that phrase). Don’t hold your breath waiting for the cost-benefit analysis though — the closest they get to science is a picture of a chimp. The jokes though, could go over well with the under-ten-set. 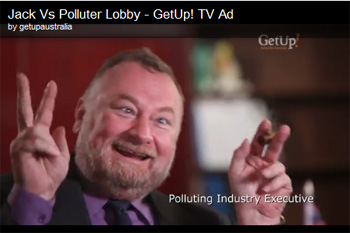 If this the progressive movement maturing, I can only say congratulations to them, they’ve made double digits.

The reasons to eschew our cheapest form of energy, to pay even more tax to not-build-more-hospitals-schools-and-roads (and not do more medical and physics research) is so obvious, apparently, that any brainwashed 13 year old can see it. It’s all to do with piggy banks and caricatures of what the business world is like. Get it?

As you watch it, ponder that someone in GetUp either thinks this will impress “decision makers”, or else cynically thinks the people who donate to GetUp are stupid enough to believe that. “Our team of media buyers are searching for availabilities in the programs that we know decision makers watch“. As if our Senators and M.P.’s have time to watch TV… Strike that – they will be watching Bolt on Sunday. Just let GetUp run the ad then please!  😉

When they can’t think of a good reason to take your money, they smear and slur instead. This is just gutter talk and a clumsy hate campaign. The cheap joke with the monkey is really going to win over the people who prefer Abbott to Gillard in polls eh?

There’s also the banal undercurrent of class warfare, and of jealousy: the GetUp team are feeding those who didn’t make it up the ladder of economic success with crass excuses to hate those who did. The so-called polluters are the law abiding bedrock of essential services. (If they had broken a law, they would be charged wouldn’t they?) Coal executives aren’t angels, but turn off the coal power stations for a week and see what happens to the country.

A union funded resort to smear and innuendo

GetUp still deceptively claim that they don’t support any particular party and “receive no money from any political party or the government.” No No! “We rely solely on funds and in-kind donations from the Australian public.” Yet they were caught hiding the $1.2 million donation from the CFMEU during the election campaign, which makes them a form of disguised Labor Party activist group. 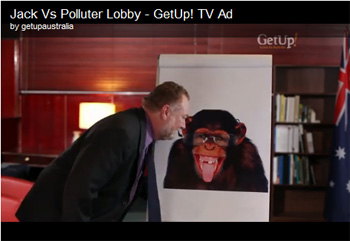 At the same time that they took money silently from the CFMEU, they supported a ban on political donations from unions and business.

As for the CFMEU,  it supposedly serves mining employees. As the Union says “We build the mines and power plants that fuel our economy and the ports that handle our trade”. So where is the CFMEU protest to GetUp at the denigration of the mining industry for being uncaring profit-hungry chain-smoking polluters and at the crazy economic plans that will put thousands of their own workers out of work?

Psst Miners? Where are you?

Your union seems to be working to put you out of a job and raise your electricity bills, petrol bills, and food costs. Why be a serf to the self-anointed elites whose great hope for you is that you’ll have less holidays, less heating, fewer trips in the car or by plane, and less choice at the supermarket?

The Carbon Tax is not about shifting money from “big polluters” to you. That’s the big lie. It’s about taking money from all of us (through higher costs) and feeding the jobs-and-junket market for the anointed green police who want to tell us how to live, while they pork barrel and hand-out trinkets to their pet mascots and patrons.

GetUp is the low base arm of the Nanny-State, come to tell you how to live.

H/t to Caroline. Thanks.