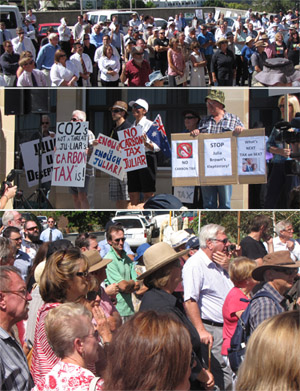 My speech at the Anti-tax Carbon rally, Wednesday March 23rd.

I used to be a Green. I used to think Carbon dioxide mattered. I still worry about falling fish stocks, old growth forest and erosion, but wind farms won’t help the fish, and solar cells won’t keep the top soil from blowing away. Real environmental  problems are being sidelined by fake ones.

Ladies and Gentlemen, I thought I was well informed, but I was shocked when I found out how what was going on behind the scenes. Everything you may have heard about carbon dioxide can be turned inside out.

How many excuses does it take?

It’s a topsy-turvey world out there:

We all have better things to do than come along today, but when the people who represent us call fertilizer “pollution”, and label the volunteers “stooges”, while they call the paid hacks “independent”; when they look at a color chart and say yellow is red, … and they call us “deniers”… we know things are running of the rails. When they ask us to pay billions to change the weather, then we know the train’s off the cliff. And when even they admit the results will be too small to measure (how many thousandth of a degree will that be, Julia?) sometimes we just have to do something don’t we?

We can act now or pay the cost for years to come.

Each time we let them get away with an untruth they grow stronger. Each time we ignore the Orwellian perversion of our language, we feed the parasites who want our freedom and our money, and that hurts us, our children and the environment.

They call themselves modern “scientists”, but break laws of reason known to ancient Greeks. They tell us there will be endless droughts, and then when people drown in floods, they say “we told you the rain was coming”.

They want us to emit less CO2, and tell us we need a free market to do it, (if they only knew what that was) then they do everything they can to fix that market – they fix the price and compensate the “voters”. Isn’t one of the most basic things about the free market, that we are free to chose what we buy? Isn’t the idea — that anyone has the opportunity to buy at the best price? Will the masses have a choice? No. And will we all have a chance to pay the same for the carbon tithe? No, they’ll give breaks to trade- exposed exporters, and to domestic-exposed employers, and to low-income earners, and to medium-wage holders, and “to our friends, our fans, and our favourite marginal seats”.  It’s another chance to crony up the country.

Like any human endeavor, science can be corrupted, and sadly it has been. Billions of dollars was poured into one side of the scientific equation. Monopolies don’t work in business, and they don’t work in science either. But these foreign science committees have so much say over our economy — who audits them?  No one.  It was ripe for the picking. Big-government paid $79 billion to find a crisis, and what a surprise… we got what we paid for. They found one.

In fairyland greenomics, everyone gets jobs, and no one has to pay

Only the evil polluters will pay.

If you’re a low income earner, you’ll pay more for your petrol, so in theory, you’ll use less of it, right? But wait, the government says it will compensate you too, so it doesn’t cost you more, which means you’ll use just as much as ever… oh, doesn’t that muck up that plan… but here’s the catch, even if you get compensated, someone somewhere will have to pay the tax. It’s not just the tax either, but paying for a whole class of people: the auditors of the tax, and architects of the corporate renewable plans, and the renewable energy certificate schemes, and the brokers to buy the credits, and the marketing gurus to sell the schemes, and the government departments to manage the rules.

And some people might still think that they won’t pay, but we are all consumers, employees, or stockholders with one degree of separation. When the corporation loses income, they have to cancel your son-in-laws job contract, reduce the dividend on the shares to the shareholders and the stock price falls in your super plan. The compensation won’t cover that. That’s when you know that no matter who you are, the person who pays for the “tax” is still the same schmuck who pays all the other taxes. You.

They want us to pay billions to change the weather. It’s time to tell them: No.

Ladies and Gentlemen, the tribal witchdoctors are at work. For tens of thousands of years they have been saying “Pay us your tithe — we will stop the storms.” Nothing has changed. They swapped the rune stones and tea leaves for simulators and models. They still can’t predict the weather three weeks from now.

There are white lies, and big lies, and lies that matter:

Back in August 2010 Julia Gillard obviously thought the Australian people would not have wanted a carbon tax, or she would have run her campaign on it. Instead she thought we’d want an ineffectual climate committee and the certainty of knowing a carbon tax would not be imposed before another election. This was an election that went down the line: 72 – 72. Seven ALP seats were won with less than a 2% margin.

In Corangamite, a mere 400 voters who didn’t want a carbon tax could have changed the leadership of the nation.
This is not just a “lie”, it’s deception writ large. The Australian public were never given the chance to vote on this issue. There was never a discussion about the benefits. It was not a debate topic. The commentators and opinion writers did not thrash out the costs and risks.

This is not how democracies are supposed to work.

This is so much bigger than just “climate change”.

If we don’t say NO. They will just ask for more.