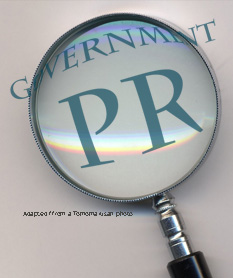 Given the multimillion dollar budgets and advertising campaigns about climate change, it would be safe to assume there was a high public awareness of the most basic facts about CO2 right?  But reader Gregg has taken the initiative and gone out and done a survey of 100 people and asked them a few basics and he’s made a valuable point in a prototype survey. The results tell us something about the aim of public education campaigns.

Governments and UN Agencies have enough resources to tell us that climate change will cause droughts, floods, storms, starvation, shrinking glaciers, extinctions, sea level rise, more aids victims, more wars, water shortages, rapes, terrorism, malaria, rabid bats, and biblical plagues of jellyfish (thanks to the Hooterville Gazette for the links to all those). But despite the acres of news space devoted to all these, Gregg’s quick survey suggests not many of our public servants or journalists have done much work to give the public the basic facts or to put things into perspective.

It seems that the average Australian is under the impression that there is 1000 times more CO2 in the atmosphere than there is, and that when it comes to sources of global emissions, people assume we put out about half of all the CO2, when really it’s only 3%.

In a perfect world, a good government would make sure it’s people had all the useful facts, so they could decide where they wanted to put their resources.

In the real world, the government has already decided for them, and it’s aim apparently is to filter the PR so that the public can reach the “right” preconceived conclusion. (An approach also known as “propaganda”.) Hence I can’t see the Climate Committee rushing to tell all Australians they only emit 1.5% of 3% of global CO2.

Question 1. What percentage of the atmosphere do you think is CO2?

Answer: 0.039% or  about one thousand times less than what the average punter thought.

Question 2. Have you ever seen the percentage given in any media?

Responses: All said ’No’ or they ‘couldn’t remember’.

Question 3. What percentage of the CO2 is man-made?

Answer: Human emissions are about 3% of the total.

Question 4. What percentage of the man-made CO2 does Australia produce?

Question 5. Is CO2 is a pollutant?

Responses: All but one thought it is a pollutant, at least to some degree.

Answer: If CO2 is a pollutant, it’s the only pollutant we pay money to pump into rose-gardens and tomato farms. It’s a fertilizer at current levels (and at levels up to five times higher). The only possible detrimental harmful effect is postulated by models which don’t get the regional, global, historical or future predictions correct.

Question 6. Have you ever seen any evidence that CO2 causes a greenhouse effect?

Responses: Almost all did not know of any evidence. Some said they thought the melting of the Arctic and glaciers was possibly proof.

Answer: Nearly all the claims of evidence amount to “effects” of global warming, and not the cause. (See the missing hot spot.)

The PDF Version of the questionaire.

We all know that the percentage of CO2 in the air doesn’t tell us whether CO2 controls the climate, but the point of this is that if the media and government were honest players, they wouldn’t be censoring the messages to the public.

The people might pay for the Dept of Climate Change, but the Department apparently serves the government, not the people, and the official line always refers to the megatons of CO2 that Australians contribute, and never ever to the percentage of the total, or some understandable quotient. Knowing that Australians only produce 1.5% of the global man-made contribution is arguably kind of relevant, especially given how little of the other 98.5% is being taxed.

Gregg suggests trying this out on your friends and family. He would be interested in results, and if anyone wants to use the survey, they can leave a comment, so we can provide them with more information. He commented that people he spoke to were usually quite interested in, and often very surprised at the answers, and he frequently got into long engaging conversations. He encourages anyone to try it on their friends and family. Me, I think, why stop there, you could meet all kinds of interesting people at the local shopping mall too. 🙂

What questions would you ask?

What other factors are missing from our National dialogue?

I’d like to see a proper formal survey done, and if I was in charge of the poll I would add these questions:

8. If so, can you tell us anything about it?

PS:  Do anyone you know happen to run a large national polling association?  😉

PPS:  I know that some commenters may pop up here or elsewhere with scornful comments about how skeptics are still going on about how little CO2 is in the atmosphere, and how they “don’t get” that most CO2 emissions are balanced. So for them, note, nowhere in this post do I argue that the actual ppm proves anything about the science. The point of the survey is about human perceptions and PR campaigns. If all Australians are going to have to pay the carbon dioxide tax, then all Australians ought to know we produce 1.5% of all man-made CO2, which means we are responsible for 0.045% of total CO2 emissions by every man, woman, child, fern, cow and amoeba.

Thanks to Gregg for sharing his project. Kudos to him for taking the initiative and getting out there and doing it.