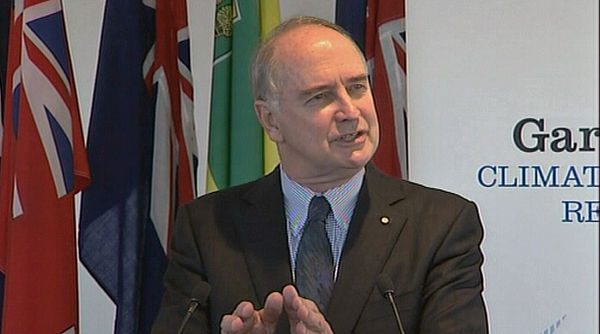 Gillard condemns us to the carbon tax plan (commencing 1 July 2012), and the future emissions trading plans (2015), setting Australia up to be the last dumb-patsy-standing as the rest of the world heads the other way and bails out of the carbon facade.

Australia must immediately pour billions into government coffers, and the man who can justify it all is Ross Garnaut.

For all the expense, the effort, and the pain, what reason did Garnaut put forward?

a/ It will reduce world temperatures. (No.)

b/ 20th century temperatures were perfect. (Says who?)

That’s right, the prof of economics has studied it all, crunched the numbers, been paid a stack, and it boils down to “tut-tut-tut, nobody will like you if you don’t do what I say”. (Well, actually it is just foreign “intellectuals”that won’t like you — shucks!)

Garnaut the schoolyard prefect is telling us off. From The Australian:

“ Australia risks a backlash from the international community if it fails to make “proportionate” efforts to cut its carbon emissions.”

But wait, it gets worse, we might confuse them too. God forbid:

Australia’s emissions growth would be caused largely by the expansion of the resources sector and would “not be easily understood by other countries”.

Except of course, they are not misunderstanding us at all. If they didn’t want the darn resources they wouldn’t be paying for them. If they could sell them instead, they’d be selling them. And in any case the Chinese and Russians are laughing at us, even as they nod and say Yes Yes, sir that’s important and can we sell you a quadrillion more Carbon certificates? Ka-ching.

The only point where Garnaut talks about anything resembling international economics is when he threatens us with being left out of the club:

He said last year that France was leading a movement to restrict trade from countries without a carbon emissions trading scheme and warned of potential trade imposts on Australia.

Oo-ee. I say “let ’em”.  Total Australian exports to France are $1 billion per annum, but we import  four times as much back from them. If they knock back Australian goods, they stand to lose more than we do. Even if it did cost us $1billion, it’s still cheaper than grovelling to the UN and selling our soul to Goldman Sachs. Gillard and state-governments-et-al have wasted more than that just on solar subsidies (not to mention the BER, Pink Batts or argh#$% — the NBN).

Garnaut admits the bleeding obvious, that emissions are tied to economic growth:

The paper says the 2008 global financial crisis had pushed developed countries of the northern hemisphere on to a lower long-term economic growth trajectory and this would result in lower underlying emissions growth in those countries. But this would be fully offset by emissions from the developing world.

Translation: We have to eat-less; have-less; do-less, and worse, when we do, the emissions will be put out by the third world in any case. The balance of power, lifestyle, and influence shifts East. Let’s all sit around and sing Kumbaya (while saving up for  those nuclear attack subs because we, ah, live in the East.)

Don’t get me wrong, the Chinese and Indians deserve better living standards, but it doesn’t have to come with the voluntary hair-shirt sufferance of the West.

The bottom line is that, according to the appointed expert on the topic, the main reason to sacrifice Australian lifestyles, wealth, power, and opportunities and to risk more massive government waste or bankster extravagance is because the foreign “intellectuals” might say not-so-nice things about us.

Who the heck cares?