Thomas Sowell wrote Vision of the Anointed in 1995, and didn’t mention climate change. Yet such is the insight of the man that what he wrote was prescient, pertinent and 100% applicable 15 years later. Our battle today follows a similar pattern to  battles over many other social policies. Sowell discusses The War on Poverty, sex education, affirmative action, discrimination, crime, infant mortality. They’re unrelated to climate science, yet the tactics repeat ad nauseum.

We fight to test policies with empirical evidence through polite discourse, while those who want influence and money have an arsenal of tools at their disposal to muddy the search for truth. The anointed substitute baseless declarations, flawed assumptions, and irrelevant motivations for real arguments.

How many areas of public policy have a genuine, no name-calling, clean cut debate about what works and what doesn’t? 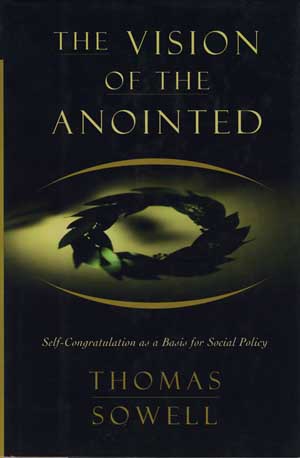 Just like Earth’s atmosphere, it’s the feedbacks that matter.

Dangers to society may be mortal without being immediate. Once such danger is the prevailing social vision of our time–and the dogmatism with which the ideas assumptions, and attitudes behind that vision are held.

It’s not that these views are especially evil or especially erroneous. Human beings have been making mistakes and committing sins as long as there have been human beings. The great catastrophes of history have usually involved much more than that. Typically, there has been an additional and crucial ingredient–some method by which feedback from reality has been prevented, so that a dangerous course of action would be blindly continued to a fatal conclusion. Much of the continent of Europe was devastated in World War II because the totalitarian regime of the Nazis did not permit those who foresaw the self-destructive consequences of Hitlers’ policies to alter, or even to influence, those policies.

In earlier eras as well, many individuals foresaw the self-destruction of their own civilizations from the days of the Roman Empire to the eras of the Spanish, Ottoman, and other empires. Yet that alone was not enough to change the course that was leading to ruin. Today, despite free speech and the mass media, the prevailing social vision is dangerously close to sealing itself off from any discordant feedback from reality.

Even when issues of public policy are discussed… often the conclusions reached are predetermined.

To a remarkable extent, …empirical evidence is neither sought beforehand nor consulted after a policy has been instituted.

The title of Chapter 4 sums it up:

“The irrelevance of evidence”

Sowell calls those who make predictions which are proven wrong time and time again “the Teflon Prophets” — no failure can stick to their reputation. He writes about  Galbraith, Ehrlich, and the Club of Rome.

He also writes about a vision so all-pervasive it has been the wallpaper of modern western discourse.

“This vision so permeates the media and academia, and has made such major inroads into the religious community, that many grow into adulthood unaware that there is any other way of looking at things, or that evidence might be relevant to checking out the sweeping assumptions of so-called “thinking people”. Many of these “thinking people” could more accurately be characterized as articulate people, as people whose verbal nimbleness can elude both evidence and logic. This can be a fatal talent, when it supplies the crucial insulation from reality behind may historic catastrophes.”

“As Hannah Arendt has pointed out, transforming questions of fact into questions of intent has been the great achievement of twentieth-century totalitarians. It is a dangerous achievement which has survived the collapse of both fascist and Communist empires and has become a hallmark of much of the Western intelligentsia.

The stakes are too high to have a scientific, disinterested, discussion.

What is at stake for the anointed in their discussions of public policy issues is their whole image of themselves as people whose knowledge and wisdom are essential to the diagnosis of social ills and the prescription of solutions. To believe that their knowledge and understanding are grossly inadequate for what they are attempting–even if everyone else’s knowledge is also grossly inadequate for such ambitious social engineering–would be to bring their whole world crashing down around them. They must believe that they know–and that they know better than others.

It is about moral superiority

…
“The presumed irrationality of the public is a pattern running through many, if not most or all, of the great crusades of the anointed in the twentieth century–regardless of the subject matter of the crusade or the field in which it arises. Whether the issue has been ‘overpopulation,’ Keynesian economics, criminal justice, or natural resource exhaustion, a key assumption has been that the public is so irrational that the superior wisdom of the anointed must be imposed, in order to avert disaster. The anointed do not simply happen to have a disdain for the public. Such disdain is an integral part of their vision, for the central feature of that vision is preemption of the decisions of others.”
…
Utter certainty has long been the hallmark of the anointed.

“In the anointed we find a whole class of supposedly ‘thinking people’ who do remarkably little thinking about substance and a great deal of verbal expression. In order that this relatively small group of people can believe themselves wiser and nobler than the common herd, we have adopted policies which impose heavy costs on millions of other human beings, not only in taxes, but also in lost jobs, social disintegration, and a loss of personal safety. Seldom have so few cost so much to so many.”

The book focuses on social policies of the 60’s, 70’s and 80’s. It’s a clean concise text discussing techniques the Anointed use to steer public discourse away from inconvenient facts, or to muddy things with a flood of irrelevant or bogus statistics. Sowell points out that most of the great philosophers were once a part of the prevailing vision of their day, yet rose above: Friedman, Popper, and Hayek among them.

There’s a collection of favorite quotes from Vision of the Anointed here.
Thomas Sowell is the Rose and Milton Friedman Senior Fellow, The Hoover Institution, Stanford University