It’s another sign of the ongoing implosion among the carbonistas: the nutter comments come out as reality hits their big dream.

Noam Chomsky — linguistics professor, proves that a professorship doesn’t stop you saying silly things, and manages to spin a “vote for the conservatives” as a ticket to destroy the human race. I mean, how do you raise the stakes (of the spin) from here?  What tops that?  Perhaps by 2012 we will hear how those wrong votes could be taking out not just homo sapiens and polar bears, but all life on Earth?

As election campaign slogans go I don’t think it will catch on: “Vote for us or everyone dies”…

The dumb-punter-voters are too stupid to make good decisions. Democracy has failed. “Chomsky” ought to choose our leaders. Of course. 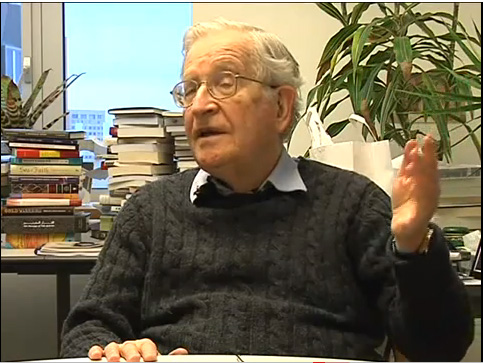 From Climate Depot and Marc Morano

Noam Chomsky: GOP election amounts to ‘death knell for the human species’
Professor Noam Chomsky has suggested that the election of a GOP Congress amounts to a “death knell for the [human] species.” Chomsky, in an interview posted on The Nation’s website, lamented the Republican takeover of the House of Representatives and gains in the U.S. Senate may spell doom for the human race.

“The latest election, a couple of days ago, you could almost interpret it as a kind of death knell for the species,” Chomsky, an emeritus professor of linguistics at the Massachusetts Institute of Technology, said in the video published on The Nation’s website on January 5, 2011. (Chomsky’s remarks appear at about 12:50 into the video. Chomsky’s comments were picked up by the website Haunting the Library. See full report here.)

Chomsky goes on to explain that the election of Republicans who reject man-made global warming claims posed “a danger to the survival of the species.” “We’re essentially saying, ‘Let’s kiss each other goodbye,’” he added.

Chomsky was echoing the beliefs of Microbiologist Frank Fenner about human extinction. See: Humans could go extinct within 100 years, says renowned scientist — Fenner believes it’s already too late to save the human species from overpopulation and climate change

Other man-made global warming activists have predicted similar doom for humans. See: Flashback 2007: Green Guru James Lovelock Predicts Global Warming Doom: ‘Billions of us will die; few breeding pairs of people that survive will be in Arctic’ — Note: Lovelock later reversed himself: See: Lovelock in 2010: ‘We haven’t got the physics worked out yet…I think the public are right. That’s why I’m soft on the sceptics. Science has got overblown’

Chomsky expressed anger that society was rejecting the man-made climate fears and he dismissed the views of skeptical meteorologists as just “pretty faces that present the weather forecast.”

Bob Fergusson of SPPI points out the Chomsky’s remarks appear at about 12:50 into the video.