Announcing the full version of the Climate Corruption series. There are two copies with different formatting, one here and one on the Science and Public Policy Site. (Click on an image below for the respective PDF version).

How many excuses does it take? 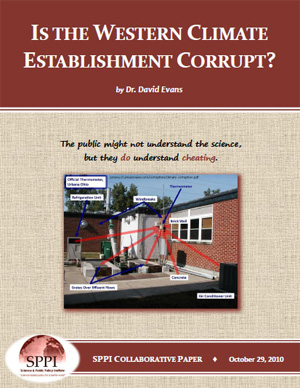 The Western Climate Establishment has allowed egregious mistakes, major errors, and obvious biases to accumulate — each factor on its own might be hard to pin down, but the pattern is undeniable.

The Western Climate Establishment is cheating:

Only a fool would ignore the message in the pattern 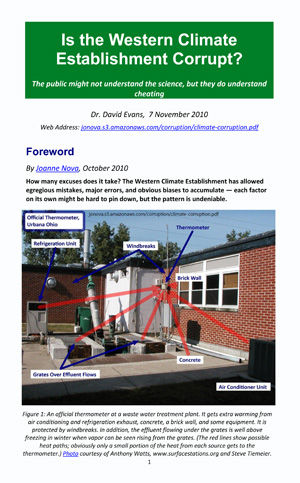 Once one or two major news outlets start printing these photos of official thermometers near artificial heating sources, and point out the deception, the rush will be on for our elected representatives to abandon the Global Warming Crusade. No one wants to be seen to be taken in by half-truths and shameless deception. Who wants to look gullible because they didn’t ask the obvious burning questions?

Those who support conclusions based on corrupt behaviour will be seen as negligent for not having considered the serious evidence here.

Dr Evans is a scientist who was on the climate gravy train, and was horrified by what he saw. He first blew the whistle in a polite way in 2008. Too many of the world’s politicians have not yet woken up, so here he collects the worst examples of climate shenanigans and explains them powerfully in terms that any politician can understand.

These photos speak for themselves. The corruption of climate science has become so blatant, so obvious, that even non-scientists can no longer throw their hands in the air and say “I didn’t know”. You don’t need a PhD to know it is cheating to place thermometers near artificial heat sources and call it “global warming”.