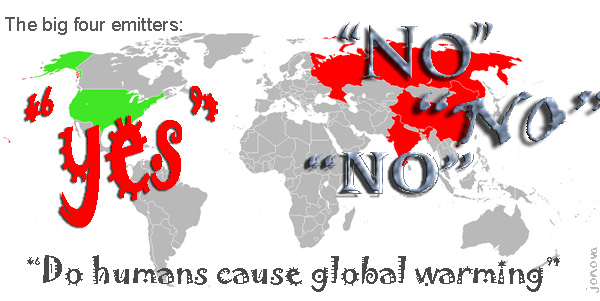 The western climate establishment consists of the climate science research bodies in the western world, and their climate scientists. The leading organizations are the IPCC of the United Nations, the CRU in Britain, and GISS and NOAA in the United States. Personnel move around within the establishment, getting funding from the same sources, collaborating on projects, and publishing in the same journals.

There are other climate establishments in this world, and they haven’t come to the same conclusions about what causes global warming.

The Chinese torpedoed the Copenhagen negotiations in 2009, refuse to commit to any quantified emissions reduction targets, and say more research is needed to establish whether warming is man-made. 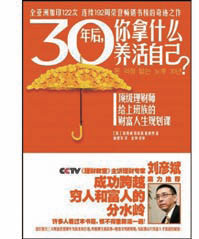 In February, one of China’s largest Power Companies ordered $60B US dollars worth of Australian coal — the largest export contract ever for Australia.

In August 2010 a book appeared in state-sanctioned bookstores in China that strongly suggests the Chinese government completely rejects the theory of man-made global warming (Low Carbon Plot, by Gou Hongyang):

“Will the increase in Carbon Dioxide definitely lead to the planet warming? Although there have been many many reports published by research institutes that verify this, but from the viewpoint of the history of man, and scientific method, the theories have not yet achieved scientific proof.

But, after many years of repeated indoctrination from every kind of propaganda machine, and the mixing together of environmental pollution and the exhaustion of natural resources, people have already formed a conditioned reflex, when the wind blows, the grass bends with it, and quickly hang these things on the hook of “carbon”, and attempted to get rid of carbon at a faster rate.”

The book argues that the theory of man-made global warming is “a conspiracy between Western governments and business to protect their own way of life, at the expense of the entire developing world —in other words, 80% of the world’s population.”

Russian climate scientists have long spoken out against the theory of man-made global warming, saying the climate is heavily influenced by solar cycles. Many “reject the very idea that carbon dioxide may be responsible for global warming.”

India issued a National Action Plan on Climate Change in 2008 that says “No firm link between the documented [climate] changes described below and warming due to anthropogenic climate change has yet been established.” In February 2010, the Indian government established its own body to monitor the effects of global warming because it “cannot rely” on the IPCC, which is headed by its own leading scientist Dr R.K Pachauri.

The four biggest emitters of CO2 are China, the USA, Russia, then India. Their climate establishments are more or less independent, but three of the four don’t agree that humans are causing global warming.

Even in the West, support is receding. In September 2010 the French Academy debated climate science—and could only agree that while the direct effects of extra CO2 were well known, the effects of the all important feedbacks were “still controversial”.

In September 2010, Britain’s Royal Society moved its position on climate change away from total support of the climate establishment toward expressing much more uncertainty. While still claiming “strong evidence” (simulations of climate models, which are merely calculations and thus not really evidence)  that the global warming since 1960 “has been caused largely by human activity”, it notes that “the size of future temperature increases … are still subject to uncertainty.” The Report makes no mention of what happened before 1850. Nor did it offer explanation for why global warming did not occur from 1940 to 1975. It concludes that “It is not possible to determine exactly how much the Earth will warm or exactly how the climate will change in the future”.