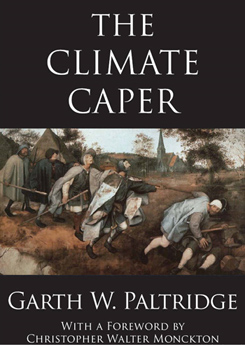 Prof Garth Paltridge released Climate Caper a year ago. As a working atmospheric physicist, his description of the fall of modern science is as insightful as his descriptions of the physics of the climate.

One of the messages  that struck me was his point that it used to be seen as  imperative for scientists to not be too specialized; to work in different specialties.

He points out that the mandate to publish or perish has far reaching consequences. To sum up his argument: the survival of a research scientist now depends on their ability to produce multiple papers; this rewards people who dilute their work, focus on trivial non-problems, and in short–tackle anything but difficult issues and deep revolutions.

Because of the need for multiple publications, no institution today would employ a scientist who was trained in another area–the new researcher would require too much uptime before their publications began to roll.  So universities aim to find PhD grads who are an exact fit for the program.

(…aiming to find an exact fit, ensures) narrow-mindedness of scientific outlook, mediocrity  in research, and a scientific literature that is so vast and overladen with minute  of the unimportant, that most of it is never read by anyone. Which is quite a change from the middle of the last century, when it was drilled into the aspiring scientist that the very worst thing to do was “to spend ones life repeatings ones PhD.” Change of field, and indeed complete change of discipline, was regarded then as one of the  essential mechanisms for maintaining the quality of scientific research.

Understanding the process of science, and having the ability to reason backed up with a broad understanding of the basics across Maths, Physics and Chemistry means that any sharp scientist from any field could analyze the latest publications in an area and come to a reasonable conclusion about the state of the evidence on that topic. There is no reason our governments couldn’t pay to set up a completely independent team of scientists to audit the IPCC. (They could start by reading the NIPCC report here). These experts could come from outside climate science but be of a high enough caliber to know what questions to ask, which answers make sense, and whether a case hangs together.

Because these experts would have other jobs to go to after the report was finished, they wouldn’t have a vested interest in the outcome–except obviously, they’d want to produce accurate work that didn’t turn out to look too silly five years down the track.

Problems with climate models: How complex they are, how inadequate they are, how they are rarely constructed from scratch (most are patched together from others).

How computer models assume that humidity rises at all heights of the troposphere even though it’s hard to measure it up high, and the only measurements we have tell us that humidity is not rising at the top of the troposophere. (See the missing hot spot for more on why this topic is so essential.)

The furphy of “Discount Rates” –-somehow economists think it’s “reasonable” for people to pay fortunes now for a tiny theoretical economic gain in 120 years time. No one would sell a super fund with these numbers, why do we buy this uneconomical environmental 401K?

Here’s yet another inconvenient skeptic. Those who want to suppress dissent may have nothing more than a PR degree themselves, but they mock anyone who isn’t part of the club of “climate scientists” and can’t publish peer reviewed science. Since alarmists care so much about the environment, you’d think they’d be keen to listen to someone who’s actually dedicated his life to studying the details. But curiously, if the expert supports the “wrong view” on atmospheric radiative physics (as defined by what, an NGO, a PR Agency?) they won’t pay attention to his research, but they’re suddenly very interested in his biography.

Speaking of which: Professor Garth Paltridge is an atmospheric physicist, and was Chief Research Scientist with the CSIRO Division of Atmospheric Research, and has a string of other distinguished positions on his resume, but that doesn’t stop Sourcewatch or Desmog insinuating he’s a paid hack, because, god-forbid, he is listed as an advisor with a group which is directed by people who (shock) also work for another group that is or was partly funded by Energy companies. They also reveal the devastating allegations that Garth Paltridge is an “eternal optimist”, and worst of all, he has friends who are skeptics.

The attack-dog sites describe in detail how he has been a skeptic for nearly 20 years, but in the curious world of stone-age-save-the-planet-logic, they think this consistent ability to see through spin, marketing and poor reasoning counts against him. In other words, they can’t find any dirt that matters.

Garth obviously made up his mind a long time ago, and through an incredible uncoincidence, other groups and people who share his opinion sought him out.

For people looking for another review of the book read John Izzard at Quadrant:

It is worth quoting further from Lord Monckton’s introduction to The Climate Caper — without giving away any of the juicy contents of Garth Paltridge’s book.

Gone is the academic freedom to open every door of enquiry, to follow every dream, to hold an opinion — how ever contentious — as long as that opinion springs from the tireless, careful, diligent iterative process of hypothesis, investigation, measurement and testing, testing, testing …

As Dr. Paltridge puts it:

Most scientists simply cannot believe that their colleagues would deliberately oversell a scientific conclusion for the benefit of a political cause. Dishonesty of that nature would fly in the face of everything that the rather idealistic typical scientist has been taught about his profession.

Read The Climate Caper, it is a wonderful little book that should delight non-public-intellectuals and really put a flea in the ear of the alarmists.

You can see more reviews on Amazon, and buy there, or direct from the Australian publisher.

Garth Paltridge is a Visiting Fellow at the Australian National University and Emeritus Professor and Honorary Research Fellow at the Institute of Antarctic and Southern Oceans Studies (IASOS), University of Tasmania. In his career, he worked mainly with CSIRO and briefly with NOAA as an atmospheric physicist, and has published more than 100 books and scientific papers.