Matt Thompson has just advised me that NAB showed up today and have appointed administrators. Behind the scenes a few key people are trying to convince the NAB to rescind the administrator and give the Thompsons 90 days. Now is the time to email politicians and media. Can someone email Tim Blair?

Background: This is the ongoing saga of how Big-Government uses complexity to play Kingmaker. Their story was summed up a few days ago in a post that with Watts Up has swept up support from around the world.

When Matt and Janet first came to Western Australia they were told they could run a feedlot without regular licenses, as long as they were not within 100m of a watercourse. It makes a big difference: if a farm is a category 68, it can run thousands of cattle without being licensed (and many dairy farms do).

I didn’t think I’d ever find agricultural codes interesting, but by paying attention to the detail we can see just how powerful the Department of Environment (DEC) is, and how selective it can be. You would think it would be easy to measure 100 m toward a waterway, but how do you define a waterway? You might expect that it would have banks, or that in a 100 year flood the water flowing in the gully might have a chance of reaching a body of water big enough to have a fish. If so, don’t apply for a job at DEC in WA!

DEC has declared that Narrogin Beef Producers are a Category 1 property needing licenses because there are watercourses to the north of the feedlot, and to the southwest. This picture  is a photo (slightly amended) of the paddock to the north, in winter (the rainy season). Would you call this a watercourse? A photo of the northern "watercourse" on the Thompson's property. (Sign added.)

This is the “watercourse” to the southwest, a remnant waterway.

This is a dry gully visible in aerial shots in the south western edge of their property (see the map image below). There’s no running water in it, and there hasn’t been as long as the Thompsons have been there. Even in the event of a major flood, the gully leads to nowhere in particular. It doesn’t flow into anything. You can follow the tree line of these dry gullies in a google map and see that they eventually might meander into salt pans that are kilometers away.

It’s not about the environment

The ostensible point of protecting watercourses from runoff is presumably to stop manure or residue flowing into rivers where it could create an algal bloom. And that’s all well and good. But the definition of a watercourse means that virtually anyplace in WA can be declared a watercourse, even if there is no chance that run-off will cross paths with a fish.

This is a map of the “watercourses”. The red lines are 100m roughly to give an idea of scale.

There is another gully to the north in the next property, but it’s much further than 100m from the property boundary.

You can see on the aerial view that the 100m distance from waterways is clear. It’s also easy to see just how close the piggery is from their backyard, and how close the Thompsons themselves live to their visiting cows (if only there were some cows there now…).

The Thompson’s property boundaries are in green. The red bars mark 100m.

The company Narrogin Beef Producers leases the active part of the property(marked in orange) from Janet and Matt Thompson. It’s more than 100m from a watercourse, but DEC decided not to recognize the lease arrangement boundaries. How convenient.

We could make a fuss about the definition of a “waterway” — but in the end, when the Thompsons spoke to the Appeals Convenor, he said that even if they won the right to be a Category 68 unlicensed property, DEC would just change the rules and make all feedlots — regardless of size or watercourses — subject to licensing.

The real problem here is that DEC are kingmakers who divide and conquer, detail by detail.

The minutae bore the pants off the average citizen, and by splitting up each industry group into smaller and smaller divisions, DEC can make key rulings without triggering a revolt from any serious combined opponent. Why can’t the rules be simpler and apply to all cattle farms? Isn’t a cow a cow? Not if you are a bureaucrat who decides which businesses rise and fall — you can play them off each other, rely on them being busy, and slip in numbing complex clauses until almost no one can predict in advance whether they are meeting the rules to the letter.

Rule by law has effectively been replaced with rule by bureaucrat. Such situations generally lead to corruption eventually (power corrupts…).

Something as simple as knowing if they were going to require licensing ought to have been obvious to an entrepeneur searching for sites from the other side of the world. Yet here are the Thompsons, nine years after they bought the property, and there is still a debate.

Just for the record

From the 31 page Appeals Convenors Report to the Minister for Environment 5 June 2010, we get a summary of what the Thompsons have been though with details. (I’ll post more on what this document reveals soon).

What is a watercourse?

The expression “watercourse” as it relates to prescribed premises is not defined in the EP Act or Regulations. There is however, reference in other parts of the Act to watercourses, which are defined with reference to the Rights in Water and Irrigation Act 1914. This Act defines a
“watercourse” as:

(1) In this Act, unless the contrary intention appears —

watercourse means —
(a) any river, creek, stream or brook in which water flows;
(b) any collection of water (including a reservoir) into, through or out of which any thing coming within paragraph (a) flows;
(c) any place where water flows that is prescribed by local by-laws to be a watercourse,
and includes the bed and banks of any thing referred to in paragraph (a), (b) or (c).

(2) For the purposes of the definition in subsection (1) —

(a) a flow or collection of water comes within that definition even though it is only intermittent or occasional;

(c) it is immaterial that a river, creek, stream or brook or a natural collection of water may have been artificially improved or altered.

The Works Approval was for 14,940 head of cattle

Remember it took 12 months to get this:

30 August 2002, the then Department of Environmental Protection (now the DEC) granted Narrogin Beef a works approval for the construction of the Feedlot with… a maximum production capacity of 14,940 animals at any time. 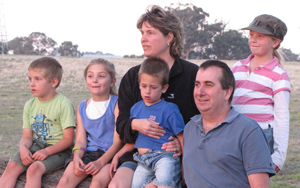 The Thompsons came to Australia from Oklahoma with expertise and their life savings, they’ve ticked every box, did everything the government asked them to do, but the long delays, impossible conditions and ever-changing rules, mean they face losing everything. They are in desperate need of help: people to send out emails, and to donate to help their four children in the event of bankruptcy which is an imminent threat.

The Thompson family have no funds available to them to face being thrown out on their ear by the bank. Donations are needed ASAP to help provide a roof over the children’s head. Please consider donating into the following bank account that has been set up so as any donations can’t be seized with all other assets of Matt & Janet including the few dollars left in their own bank account.
UPDATE: for international transfers:

I’ve set up a special paypal donation button (in US dollars). This will go to my bank account, with an ID that means it will be recorded as a donation for The Thompson Children (Kate Abbey Luke and Will). I will transfer it. Thanks — JN

Other posts on this topic:

4 Days notice! The Thompsons are given 4 days to pay

Tyranny: How to destroy a business with environmental red tape

Watts Up With That has been providing fantastic support to The Thompsons in A Call To Action for the WUWT Community!

PS: For those wanting a science thread (rather than a political one) I posted this tonight too News from the NIPCC

Please always be polite, short and to the point.

Letters to the Editors

Thanks to Dale Stiller from WUWT

It makes a big difference if political staffers and the media get emails and letters. They can ignore one or two, but they can’t ignore a flood.