You can’t buy the truth, but you can buy a committee interpretation of it.

One year ago a group of eminent scientists wrote a letter to congress provocatively titled “You are being deceived.”

Now, in a similar vein, but with all the gory details, John McLean has put together a 66 page compilation of the modus operandi and history of said deception. It’s a story of how small committees of activists cite their own work, ignore contradictory information and dissenting reviewers, use the peer review system to lock out opponents,  and blithely acknowledge crippling uncertainties (but only in tracts of text that few will read, and  never in summation when it matters). 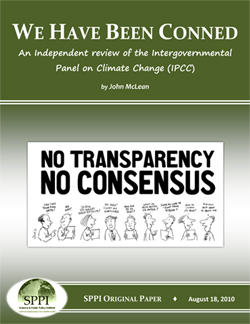 When your favourite prancing-horse-committee — the IPCC — is failing to impress the crowds, it’s time to distract them with dressage from another source. In this case, the IPCC is being reviewed by the brand new InterAcademy Council (IAC). Expect their somber pronouncement to discover some minor flaws of process, posit a few proceedural improvements, and then declare that above all, the science is sound, rigorous, and that carbon dioxide will surely kill millions if we don’t allow the guys at Goldman Sachs to save us all with complex derivative triple A packages of CDM’s. Amen.

There’s a cyclical nature to the lifecycle of committees. Long ago The International Science Union (ICSU) was pushing the greenhouse effect scare, they ran the conferences and subcommittees and programs that helped create the IPCC.

The hand of the ICSU can be seen in the entire lead-up to the establishment of the IPCC. It arranged most of the conferences and with its funding partners – usually the WMO and/or UNEP – it managed numerous meteorological or climatological research projects, many of which had Bert Bolin in a lead role.

The IAC and ICSU have a very similar role. Both seek to fit the square peg of science into the round hole of politics, to take a field where truth is not determined by consensus and twist it to fit a field where consensus is everything. Both have grandiose statements of intent – the IAC’s is “Mobilizing the world’s best science to advise decision-makers on issues of global concern” – and both work very closely with UN bodies such as the UNEP, a co-sponsor of the IPCC. … in fact the IAC seems almost a twin of the ICSU.

The AIC has 18 board members – three of which head national science bodies – all of which are members of the ICSU. One of the three is Kurt Lambeck, who recently declared his not-so-impartial interest in the matter by launching a document I wrote about a few days ago…where he announced that humans are affecting the climate, that the public were getting confused: that clouds could provide negative feedback, but somehow (defying all logic and reason) it wouldn’t change the outcome if they did. Can anyone imaging Lambeck digging hard for faults with the IPCC?

McLean covers the history of the development of the committees, their connections, and their aims.

I haven’t got time to do it justice, but suffice it to say, science needs competition: different researchers, different theories, and different institutions — all trying to one-up each other. When John McLean writes about the lack of transparency in the ICSU or the IPCC, and the overlapping names and aims, I see  the dark shadow of monopoly science smothering the competition.

In almost every country the national scientific authority (“scientific academy, research council, scientific institution or association of such institutions”) is a member of the ICSU and so too are many key international organizations for specific scientific fields. According to ICSU statute 8 of membership rules21 these members are required to “support the objectives of ICSU”, which gives the ICSU extraordinary authority across all scientific fields. Members of the ICSU include the Royal Society in the UK and the National Academy in the USA and that seriously undermines the standing of the statements of support for the IPCC that both bodies have released since IPCC 4AR in 2007.

There are many disquieting aspects to the ICSU:

(a) The ICSU’s 8-member executive board ultimately decides that a project will be undertaken. This means that it evaluates for each project the benefit to society, but the methods that it uses remain a mystery.

(b) It relies on “selling” an idea to “client organizations” and having them provide the research funding. If the project is of no interest to these clients then no funding might be forthcoming, and when governments and intergovernmental work is involved we can assume a political dimension to that interest.

(c) It seems likely that scientists can lobby the executive board into approving certain programs that are likely to find a research partner.

(d) The ICSU has an interest in ensuring that members of its member organizations are employed (i.e. funded).

(e) It produces no scientific papers that might be exposed to peer-review but provides policy advice in monograph (i.e. book) form. The output of research and the resultant policy advice receives no independent scrutiny, especially regards accuracy and the selective use of supporting material, and the ICSU is therefore in a position of being able to manipulate international and governmental policy. (Of course peer-review might be a waste of time if those reviewers were members of ICSU member organizations.)

(f) The ISCU is not transparent in its decision-making or its actions. It discloses little enough information about its in-house work on current projects and only reports generated by past projects. No listing of the membership past executive boards is available, nor is information about the development of past projects, which means that no information is available to the public about the formulation of ICSU projects, decisions made in relation to those projects, the manner in which they were conducted and the basis for any conclusions. In short it is impossible to identify the individuals responsible for the decisions to support each ICSU program and the integrity with which those projects were carried out.

Thanks to Josh for the cartoon on the top (and cover).

The Full Article We Have Been Conned from the Science and Public Policy Institute.