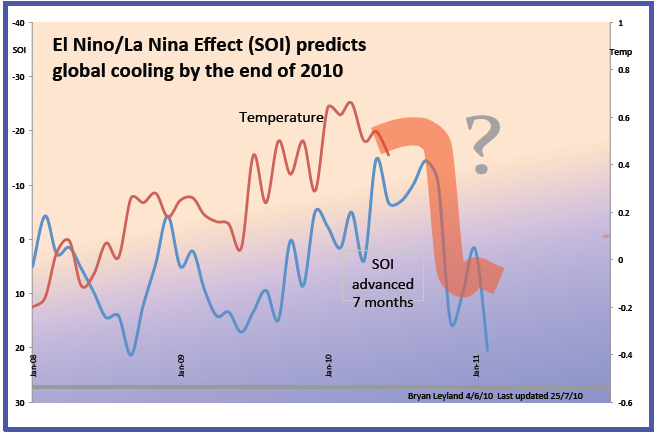 A July 2009 paper by McLean, de Freitas and Carter showed that global average temperatures followed the Southern Oscillation Index (El Nino/La Nina) with a 5-8 months lag. The graph below shows that when the SOI is shifted forward by 7 months the two plots change direction together (except when volcanic eruptions caused cooling).

The chart above shows a projection of temperatures to Feb 2011. The chances are that the present warm spell will end quite suddenly before the end of this year. Over the next few months the SOI will indicate whether or not the cooling will continue beyond Feb 2011. Evidence from studies on past climate and sunspot cycle related effects gives a strong indication that the cooling will continue. 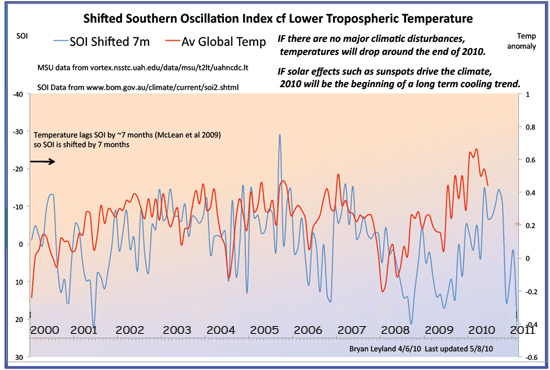 Where can I find more information?

Yes, but because the critics failed to understand the process (“derivative”) that was used to match the peaks and valleys in the two sets of data and derive the 7 month delay. Therefore they refused to accept that the above plot is actual temperatures and SOI. (They are). The response by the authors is here.

A few thoughts on the peer review process

The Response by the Authors (here)  tells the story of how their paper was published in the Journal of Geophysical Research (JGR). Prior to publication on July 23 2009 they received glowing referee reviews, but afterwards the usual ClimateGate Team leapt into action for speedy damage control.

Within a couple of weeks Foster et al (Grant Foster, James Annan, Phil Jones, Michael Mann, Jim Renwick, Jim Salinger, Gavin Schmidt and Kevin Trenberth) submitted their critique of it to the editor of JGR Atmospheres. At the same time as this, it was posted on the Internet – formatted in JGR style, as if it had already been accepted by JGR.

About then new editor was appointed at JGR (Editor-2).

The editor asks for suggestions (from Forster) for unbiased expert reviewers and Forster et al suggested six. But all six were well known to Phil Jones. Jones comments to friends that “All of them know the sorts of things to say – about our comment and the awful original, without any prompting.” So much for independent impartial reviewers.

Editor-2 was advised twice of the existence of these Climategate emails but was not concerned. Nor was he concerned that the paper had been published already on the internet (on August 7), and worse, with the JGR page header, in clear breach of the JGR rules.

Yet the three reviews of our response that we were provided with were scientifically insubstantial. Only one reviewer mentioned the time lag that we established, despite its pivotal importance to our findings. And two reviewers focussed mainly on the derivative technique that Foster et al.’s comment falsely implied was the basis of our conclusions.

So the guys who pervert the system by suggesting friends as reviewers, and who breach the rules by falsely prepublishing, are given a free pass to the printing press, and the team who ought to be entitled to defend their own work are shut out for no clear reason.

This is the state of modern peer review: A few anonymous unpaid reviewers, whose names are suggested by the reviewees themselves; this is rigorous? Who are we kidding. We have tighter controls and better standards for peer reviewing Cab Sav.

The McLean et al response is published in full at SPPI (Appendix B is the reply to the rebuttal that was rejected  – pages 21-25).