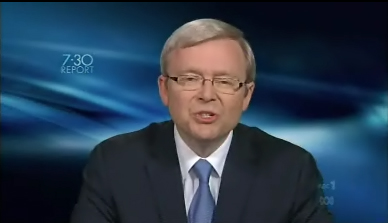 Kevin Rudd let slip yesterday that he has a vision for bigger-more-malignant ETS than the one he dropped.

“We need to make sure that the Senate becomes, shall I say, positioned in a manner which is able to deliver that change to Australia’s domestic laws,” Mr Rudd said at a news conference with the Maldives president.”

We missed the bullet in December. As a nation we came within a butterfly-wing-flap of sacrificing ourselves to the carbon-Goldman-Sachs-socialist-nightmare. But it could still happen, and it could be worse. The national orbit has swung again slightly, like a pendulum with an elliptical chaotic path. With Rudd destabilized, so are we all collectively far from center.

Australia could be headed for an election where climate change is still a central issue, or worse, it won’t be, and the nasty surprise will spring afterwards.

The Greens are gathering power (16%) from disillusioned Labor voters. If, at the next election, Rudd wins, and the Greens control the senate, what we get then will be far worse than the ETS we fought before. They will have carte blanche to run the chainsaws through the intricate branches of business, careers, and livelihoods.

Let’s consider what kind of cuts the Greens have in mind:

The Greens want greenhouse gas emissions slashed by 40 per cent by 2020, a faster start to an ETS, and less compensation to business.

It’s not the five percent cut (which, with population growth, still translates to a mighty 25% cut in our carbon footprints). Forty per-cent of our total emissions (and with even more people here) and in only TEN years. So everyone, let’s sit back and imagine which half of the day you’ll turn off the electricity for? Let’s say midnight to lunch… everyone walks to work, reads with LED torches, and has their first cup of tea at 12:10pm as they turn the kettle and their computer on. The Australian Stock Exchange goes back to cardboard punch cards delivered by carrier pigeons for their morning sessions. Police and ambulances are the only cars on the road in the am: they have to dodge the horses and bicycles.

At the moment, the Greens have five senate seats. The two senators that saved us from the ETS are Steve Fielding and Nick Xenophon. And Fielding, of course, we owe a big debt to. As I wrote last year, Steve Fielding, the former Engineer, was one of the only politicians around the world to do what politicians should do. He asked for evidence.  As it happens, Dr Dennis Jensen (Liberal MP for Tangney, in Perth) has been speaking out as a skeptic for years, back when almost no one else would, and far ahead of the pack, but it was Fielding who held the crucial vote Minister Penny Wong so wanted last year, so it was Fielding that captured media attention. Both men are trained in physics — Jensen having the only science related PhD in Parliament.

Kevin Rudd will do whatever he thinks he can to rescue a position that is fast becoming openly derided. Even former Labor prime ministers are not averse to publicly discussing “the next Labor leader”. The man is a bully. Rather than negotiating and peacemaking to find compromises that everyone can wear, he makes loud declarations that “he will not be intimidated”, “he will not give in” and he “will not be railroaded”, as if it was all about “him” and not about 21 million people and 7 million square kilometres. It forestalls any discussion of the shades of grey of how we find the tipping point between too much, and too little. If he was dealing with a terrorist, it might be the winning approach, but it’s no way to run a nation. Skeptical scientists or productive miners are not the enemy.

Like all careers built on aggressive bluffs — when it starts to unravel — it goes exponentially.

The image comes from this 7.30 Report interview where Rudd was grilled over the ETS back down.