The Age — formerly a decent newspaper — never fails to take an opportunity to parrot PR for Team AGW. 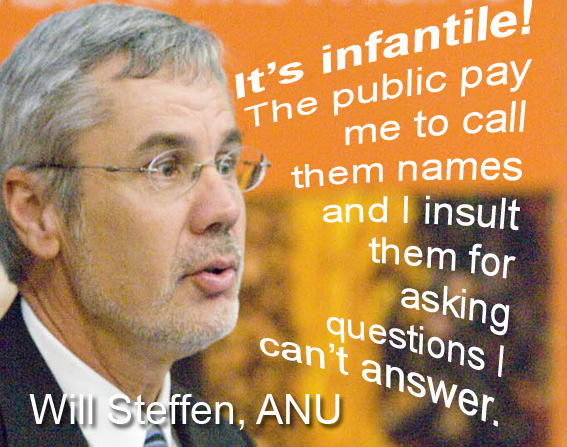 A SCIENCE adviser to the federal government has described the debate in the media over the basics of climate change science as ”almost infantile”, equating it to an argument about the existence of gravity.

It takes a tax-payer funded Pro-fessor to equate AGW to gravity. It must have taken years of education to be able to issue pronouncements like this eh? If Australian taxpayers were hoping to get a bit more than just bluster and name-calling from certain public servants, they’re bound to be asking for their money back soon.

Not to put too fine a point on it, but the existence of gravity is proven each day you don’t get flung off the planet when you get out of bed. We can measure gravity to twelve significant digits*, but our value for climate sensitivity to carbon dioxide varies from 0 to 10. Pick a number. We can’t even get one significant digit fixed. Quantifying gravity involves dropping a rock with a clock and a ruler. Quantifying carbon’s effect on climate change involves understanding cloud-formation, ice sheet changes, evaporation, humidity levels in air 8000 m above Singapore, and ocean currents at the bottom of the endless abyss that we can’t even measure.

Speaking at a Melbourne summit on the green economy, Professor Will Steffen criticised the media for treating climate change science as a political issue in which two sides should be given a voice.

Is it political? Heck No. It’s not about managing our economy, assessing risks, choosing between different courses of action… err… it’s pure science. Prof Steffen has modeled our future, there’s no need to involve the economists-consumers-engineers-investors-medical-experts-or those pesky kids we’re supposedly saving-the-planet-for. Managing the country is pure science now;  free speech and democracy-babble, who needs it!

This censorship of speech, and appeal to authority is the antithesis of science, and Steffen simplifies things ad absurdium. In Australia, he appears to have been appointed Carbon-King-of-Bluster. Find me a sentence where he substantiates a claim with something that amounts to more than “…it’s true because I say so”.

It’s a no-brainer. If you go over the last couple of decades you see tens of thousands of papers in the peer-reviewed literature, and you have less than 10 that challenge the fundamentals – and they have been disproved,” Professor Steffen said after an address at the Australian Davos Connection’s Future Summit.

“Tens of Thousands” of papers eh? So why doesn’t he dig out a few and help his colleague Dr Andrew Glikson who is at least honest enough to engage in a debate and try to answer the question: Can you name any paper that supports the claim that positive feedback occurs and will double or triple the direct effect of carbon dioxide? Without that amplification the big scare campaign is all over (and so is much of the funding that feeds the associated junkets, conferences, grants, Institutes, and certain “science advisers” to the government ).

And which 10 papers exactly have been disproved? Steffen can’t name them, won’t try, and helpfully leaves things vague as a one-size-fits-all whitewash. Pure bluster. Adam Morton dutifully prints all that without checking, as if it’s a pronouncement from the Mount and one of the ten commandments.

Don’t give me the excuse that he’s written giant documents with thousands of references, so the evidence is there “somewhere”. It only takes a few minutes to name and explain one paper. Waving vaguely at tomes is part of the shell game. If he wants rational discourse, this is where it starts, with details.

Right now, this almost infantile debate about whether ‘is it real or isn’t it real?’, it’s like saying, ‘Is the Earth round or is it flat?’

Actually, the only one trying to debate whether “it’s” real or the world is flat is him. No one else wants to reduce public conversation to meaningless descriptors as much as he does. What “it” is he talking about? Does he mean “climate change”? He’d sure like us to debate that, because he’d be on safe preschool-climate-science terms where he could win: Yes Esmeralda, the climate does change! But the rest of us keep asking him to debate the real issue instead of his fake-o-strawman-substitute.

[Climate change] is a hugely important question and yet we are not having a rational discourse in the media in Australia on this question. That is my biggest frustration.

This is quite funny really. (I laughed). So Steffen is frustrated that the discourse is irrational? This is the man who uses his academic authority to mock opponents (that he won’t debate) with strawman arguments that are irrelevant. He claims he wants rational discourse, but works hard to stifle any discussion that doesn’t agree with him. He actively contributes to the nightmare of government spin and irrationality.

Asked about the scepticism of Opposition Leader Tony Abbott, he said scientists respected leaders from both sides of politics who showed respect for scientific expertise.

“Respect for expertise” is code for argument from authority: Trust me I’m an expert. It’s the cop-out.

Real scientists don’t have any respect for the fawning servants of bureaucracy or fame. We admire those who can reason, and not those who pour confusion on conversations with confounding pomposities. The ingratiates who take our money but call us names, while they dodge debates and hail vainglorious victories over points we never raised: these we mock.

Thanks to Ainslie for the tip-off.

*Thanks to BobC for pointing out that we can measure gravity to 12 significant digits (not 4).