It’s either a seismic shift in power here, or a farce of Grand Proportions. Either way, if you haven’t heard about the Australian Super-Tax, it’s one of those full-moon-moments in Western Democracy when “one plus one equals minus thirteen”, and the guy earnestly telling you this is also running the country. The sheer Spectacle of Stupid is something to behold. 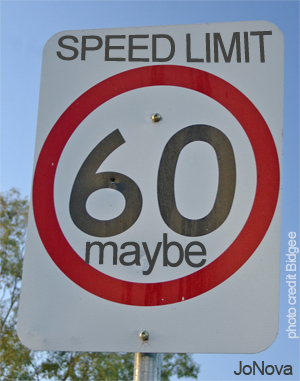 Guess what the rules will be next year?

For the first time, our government has announced a war against a whole Australian industry: mining (the same sector that rescued us from the global financial crisis and produced  37% of our total exports in 2009).

Australian Prime Minister Rudd desperately needs a big win to go to the next election with, and desperate men are dangerous. He was taken in hook, line and stinker by the Big Carbon Scare —  bet his reputation on the big bluff, and crashed and burned. He doesn’t want to look like a complete loser (and who does) so he grabbed the easy wedge; attack the rich foreigners, grab the fast cash, pretend to be Robin Hood. Et Voila! The Resource Super Profits Tax*.

This is not so much about climate (sorry) but it is a story about totalitarian trends in government, grand theft, and dismal reasoning. Like the Big Carbon Scare, there is no polite discussion of the pros and cons — the government reduce the commentary to fake black and white choices, name-calling, and “moral positions”. Oh, and the “evidence” is all based on … modeling.

Rudd argues piously that underground resources “belong to all of us”, which is true, but a false front to fight on. The companies already pay royalties to the states, but not the Fed). So we Australians are not giving away our minerals for free, and it’s not a question of charging or not-charging for our resources (as Rudd’s Labor government make out) — it’s a question of the price**.

Rudd wants to charge a higher sovereign price, a tax regime on mining that’s higher than anyone else in the world (the Canadians, Brazilians, etc charge much lower prices). Maybe we should charge more for our minerals. But no one is talking about the real issue: whether we should lead the world at raising prices.

The Minerals Council of Australia estimates miners will move from one of the highest rates in the world — 38% total tax — to a world record breaking 58%. Why would the miners, entrepreneurs and mineral consumers of the world pay extra when they can get their minerals elsewhere? Hasta la vista Australia.

In mining, a bucket load of money really means something.  ( This BTW is Bradken Face-Shovel Bucket)

If Australia wants to charge a bucket-load for it’s in-ground minerals, investors and miners will just head for a cheaper country. (I can’t believe someone needs to explain “supply and demand” to our Treasury.)

The Australian dollar fell 6% more than the Canadian and Brazilian currencies since the announcement of the super-tax, as investors began doing just that. The tax isn’t even due to start for a couple of years, but what investor waits for everyone else to sell?

Rudd steals from the Australians who were clever enough to analyze the market and risk their money to help companies get goods out of the ground. Some investors have been doing the research, taking some losses, and paying interest on loans for ten or twenty years, but Rudd thinks it’s fair to take a big slab of their profits. If a private corporation threatened to change the contracts ten or twenty years after they were signed, they’d be sued, but the government wants to help itself ad hoc and somehow this criminal madness is a serious election policy.

Everyday Australians are of course free to buy shares, and were always “free” to get a bigger share of returns. But why buy shares in the mining companies? Rudd will give you the rewards anyway. (Especially if you are in a marginal seat.)

Why steal from mining shareholders in particular? Why not, say, banking investors or high-tech supporters? It’s random and arbitrary. Hence the tyranny. It’s as if the Politburo sent spies to Australia and they were accidentally elected. (We thought the USSR was defunct. Instead it’s just moved to Canberra.)  Did the Rudd government just suggest partially nationalizing our mines?

Rudd claims it will help “super” holders (think 401K in the US). Ironically, if they were invested in mining, these same super holders and self funded retirees have already lost more than they stand to gain. (The market here lost billions in the few weeks since this policy was announced.) This kind of “help” is known as sabotage.

It’s the retrospective nature of the tax that breaks all the rules. It’s like changing the speed limit and then fining people who broke the “new” limit last year. Driving within the law is not enough anymore, you need to guess what the speed limit will be next year. And you thought Australia was a first world country with a low sovereign risk. Which court could we sue our own government in?

Remember, exactly none of the treasury models correctly predicted the largest global trend in stocks in the last 50 years. Not one predicted the global financial crisis.

Rudd said: “It is important to pay emphasis on the independent modelling of treasury who’s put all the factors together and projects [the mining] industry will grow by 6.5 per cent over five to 10 years,”

Did the models predict that virtually all the big companies would put billions of dollars of their future projects on hold, move to overseas mines, and then announce all this, knowing it would trash their share price? (Which it did.)

Supposedly top notch TV ABC interviewer Kerry O’Brien quizzed our Treasurer Wayne Swan.  Swan got away with writing off all the miners complaints with the line “well they would say that wouldn’t they?” Swan pointed out that all the other times new taxes were introduced, the industries always complained, as if that made complaints from all industries always meaningless. If that’s the case, why not tax them 60%, or 80%, why not 100%? They’ll howl, but they would, wouldn’t they? Swan weaseled out of discussing the complaints themselves. Just as with the climate, if the media can’t (or doesn’t want to) force them to actually answer the questions, who can?

The government has actually said that the new tax will increase mining. Soak in that thought for a while. That’s why they bought in a big Alcopops tax last year right — to increase teen-drinking?

If just hitting on big successful industries is such a no-brainer of a good idea, why haven’t all the previous governments done it before? Could it be that there is a quid pro quo, or a pluses and minuses side to this story that the government doesn’t want to mention?

Think you are safe outside Australia?

Nowhere is protected, and this cancerous growth of government is coming to a polling booth near you. If our Government gets away with retrospective taxation, which is naked robbery, the idea is bound to catch on. Sure, initially it will benefit all you lucky sods who live in Canada (which charges so much less but reaps so much more mining activity), and it will benefit all of you who own shares in mining sectors outside Australia. But ultimately other countries will raise their prices (after the Australian industry is caned and sold to foreign owners). We all lose in the long run.

The Australian Opposition is missing the chance here (as conservative parties so often do). It’s got the moral high ground. It’s defending the right of Australians to get a fair deal, to spend the money they earn, to look after themselves, and for all industries to be taxed equally and competitively with their international cohort. It’s fighting for mum and dad shareholders, as well as workers in mining. It’s fighting for country towns who struggle against the pull of the big-cities. It’s fighting for our constitutional rights. Australian shareholders have a contract with the mine, and with the government. The Government is trying to renege on its side of the deal.

But wait! It’s a National Emergency!

Rudd declared a National Emergency (!) Things are so bad that he has to spend $38 million to advertise a party policy, and it isn’t even law yet. The government thinks it’s an emergency because their polls are falling. Somehow the solution is to spend millions on adverts to tell us the same things the government already say for free at press conferences which are repeated on prime time TV every day. There is a national emergency, but it is the government itself. Could they be more fickle, more arrogant, or less in touch with reality?

What would I know?

Few people know that I’m partly supported through our own self-sufficient entrepreneurial investments. Yes, we (the other half and I) are Jo citizen shareholders. We study the numbers, research the big global strategic economic moves, and put our money where our reasoning takes us. So, naturally I’ve got strong feelings about the Resources Super Tax, even if it doesn’t hit our favorite sector as much as others. Just as I stood up for Peter Spencer’s land rights, I stand up for all Australian’s shareholder rights. Mostly I just stand for common sense.

* The RSPT for those who don’t know: It’s a new tax rearrangement where the government takes 40% of all profits after the first 6%. It applies to all projects, not just new ones. The government “pays” 40% on all the projects which lose money, which will be a big help eh, for all the projects that are already up and profitable and well past the failure stage. The latest talk suggests they might raise the level they call a profit “super” from 6% to 12% (and drop the irrelevant 40% of all loses coverage). There’s more info here.

** Strictly the owners of the mineral resources are the States rather than the Commonwealth, according to the Australian Constitution. So as well as upping “the price” this is just another uncorporate takeover. It’s Bigger-Government snitching some power from Smaller-Governments.